The Daily Breeze, like many marginalized, flailing liberal publications throughout the South Bay, refused to call out the true nature of the terrorist attacks in New York City yesterday.

Check out the headlines on the cover page: 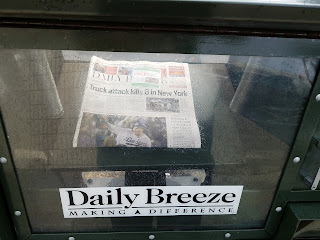 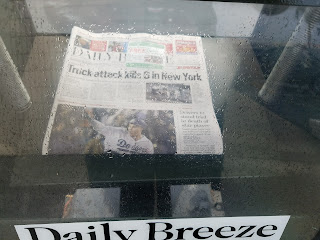 Is it any surprise that the American public holds so much of print journalism in low esteem.

This is beyond disgusting.

Everyone with two eyes and two ears working for their minds is aware that this was a radical Islamic terrorist attack.

Do we really have to accept that the print media is so beyond in printing the truth about what is happening in the world that they cannot get the facts straight?

No, although that slow-down becomes more apparent every day.

The real problem is that the press is so addicted to its politically correct world view, that they cannot accurately report the truth about ... anything. This terrorist attack takes national security into a whole new field of major concerns.

We need a robust press which will tell the truth about horrific events and allow readers to connect all the dots as needed to come to win conclusions.

This evil Islamic terrorist shouted "Allahu Akbar" while plowing into innocent pedestrians along the New York City street. This kind of evil cannot be minimized with "Truck attack." Does the media really think that the truck committed this gross deed on its own with no human action or direction behind the wheel?

The media is facing a grim fate, indeed--and they have themselves to blame.
Posted by Arthur Christopher Schaper at 8:28 PM