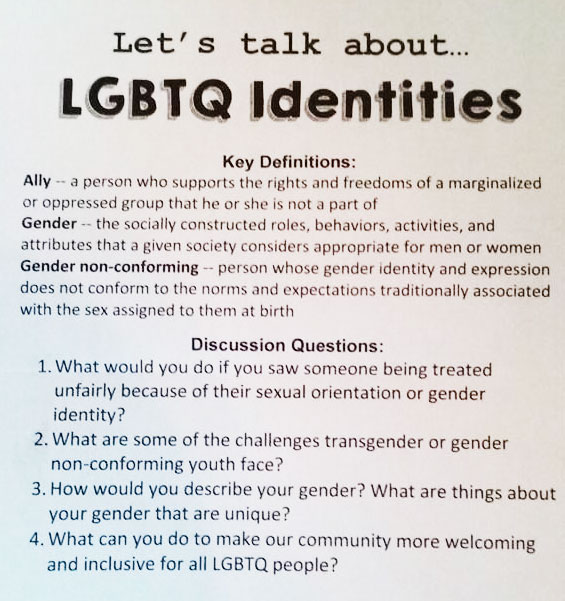 Given out in the children's section: Here's what the Temple, Texas library officials think your children should be told about.
Recently, public libraries across the United States have been taking part in a frightening campaign to push the radical LGBT agenda on children.
When the local public library in Temple, Texas put up a prominent “gay pride” display in the children’s section targeting kids with LGBT propaganda, many parents were understandably very upset.
But thanks to a local Texas MassResistance parent (who is also a pastor) they didn’t just sit there. They took action. The local media and liberal activists tried to intimidate them, but it didn’t work.
It started back in June when the library put up a pro-LGBT display in the children’s section. 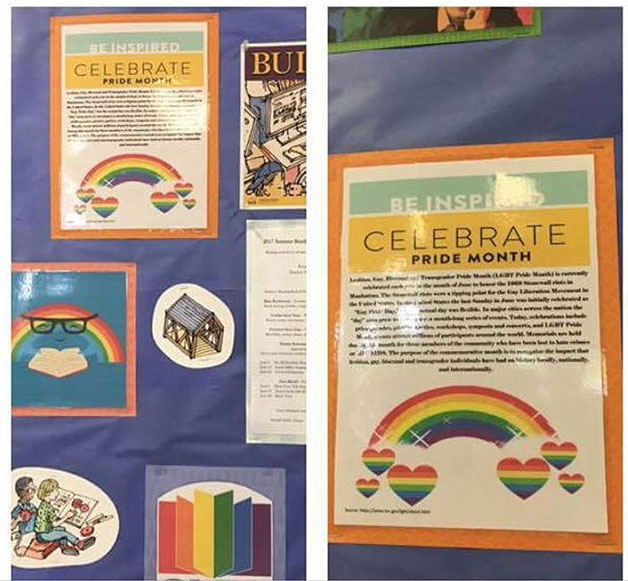 It seemed particularly aggressive. It included numerous books for both young children and teenagers which were psychologically aimed at portraying homosexuality and “transgenderism” as normal and positive, and even encouraging youth to consider engage in LGBT behavior. A homosexual household with “two mommies” or “two daddies” was shown as no different than having normal parents. Traditional and religious values were portrayed as backwards and mean-spirited.

Some of the LGBT children's books on display in the children's section of the library.
Children were given handouts pushing the radical ideology that homosexuality is an inborn “identity” and that homosexuals are a “marginalized group” that everyone must support. They were told that each person is not innately male or female, but has a “gender” that is “assigned at birth” and changeable. The materials sent a strong message that the moral thing to do is to become advocates for these oppressed people.
The library passed out a list of other “library resources” for young children and teenagers to further immerse them in the LGBT world. 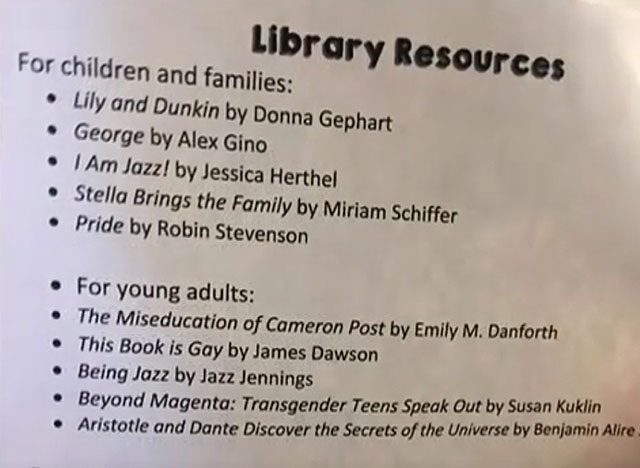 The library's LGBT "resources" list given out in the children's section.
Just to make sure that all the library patrons got the message, the library had “gay pride” material prominently on its main bulletin board.
Not surprisingly, the community wasn’t notified of any of this beforehand, nor was there any public input in it. Parents only found out when they came to the library with their children. Many of them were very distressed, but didn’t know what to do.

There is an active pro-family group in the area called Concerned Christian Citizens.The leader of the group is also a parent activist with Texas MassResistance. When word got to him about the library display, he went and talked with the two librarians in the children’s section, and also with the head librarian. 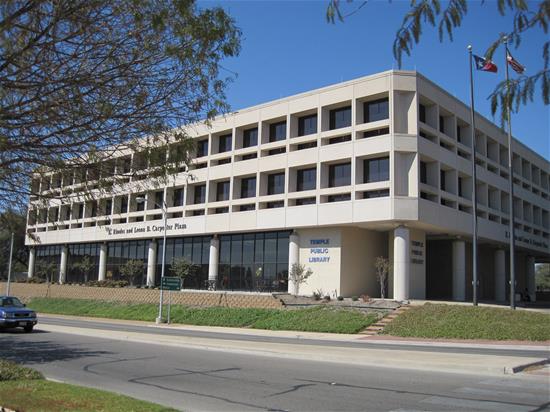 The Temple, Texas Public Library
He was calm and polite but direct. He said that the library had crossed a line, and this has outraged many people in the community. The display promotes an immoral lifestyle of sin and confusion that is contrary to Biblical values. It undermines parents’ efforts to raise children with their values. At the very least, he told them, the library should have an opposing view right next to it.
The head librarian told him that she agreed that the library had “probably failed” in their message here, intentionally alienating much of the community. However, she did not say that they wouldn’t do it again, or promote the LGBT agenda in other ways.

Issue heats up as word spreads throughout the community

The word of what had happened was shared through social media. It really caught on; thousands became aware – and were angry!
This is not an isolated problem. So the Concerned Christian Citizens announced that they would be holding a big multi-town forum to educate parents on the homosexual agenda targeting children in schools and libraries. Texas MassResistance speakers from Austin and Ft. Worth would be presenting. (The forum took place on Friday evening, Oct. 20, in neighboring Killeen, TX – and was very successful! Our full report on that is coming soon!)
Meanwhile, the head librarian at the Temple library had become more hardened, signaling she would not back down on promoting the LGBT agenda to children in the future. “Our patrons have diverse interests and backgrounds,” she told a local reporter. “Libraries are here to provide informational, educational and recreational resources to all.”
She added that there is a bureaucratic procedure that parents can follow to ask the library to change its mind, but she’s still the one who makes the final decision.
The local pro-LGBT liberals also wrote nasty letters to the editor of the local newspaper praising the library and condemning Christians, calling them names, etc. But those attempts at intimidation didn’t work. These parents continued to be resolute!

Parents confront the Library Board

As in many jurisdictions, the public library in that town is governed by a Library Board, which meets quarterly. The Texas MassResistance parent spread the word for as many people as possible to come to the next Temple Public Library Board meeting, which was scheduled for Tuesday, Oct. 17.
Normally, almost no one ever attends Temple Public Library Board meetings. But on Oct. 17, nearly 50 people piled into the meeting room. Approximately 80 percent were parents upset at the LGBT push in their library. The rest were pro-LGBT liberals who were there to try to defend the library's actions. The media, including TV cameras, were also there. It was all quite a shock for the Board members.

Testifying at the Library Board Meeting. People sat at the table and lined the walls, filling the room.
About 21 people were allowed to speak and make their case to the Board. Later, some of them were interviewed on TV and in the left-leanig local newspaper.
Basically, the pro-family parents (and grandparents) were wonderful! They spoke boldly and without fear.
One former Texas State Representative, Molly White, who testified, said:
Never, in my wildest dreams, did I ever imagine that my grandchildren would be exposed to materials that are not only contrary to personal growth, but leads people down a path of dysfunction and self destruction. Family units with a mother and father are the backbone of all society. Without strong, intact family units, societies will collapse.
Another man said:
If we're going to glorify one set of deviant or degenerate activities then we need to have the other side and we need to have traditional displays.
The pro-LGBT liberals did their best to try and shame and intimidate the pro-family people. Many used the tired old “book banning” line of attack. They said that children need and want this “information” and “knowledge” – and conservatives are using their backwards religion and prejudices to keep that from them. The public library is there to be a source of facts for the community, they insisted over and over again.
Some of the quotes from people who testified:
Information doesn't hurt anyone. It just makes you smarter. It makes you understand things a little bit better.
The free flow of information was considered so important by our founding fathers — the men who established this country — that freedom of press, freedom of speech along with freedom of religion were enshrined in the First Amendment of this Constitution.
That display was not about politics. It was not about values or religion. It was some books.
But of course, that’s all hypocrisy. Would they have a display of books with “information” encouraging children to smoke cigarettes? Or literature saying that slavery in America was a good thing? The purpose of a library – especially regarding children – is to provide uplifting and healthy information to help make them better people and better citizens.
And the libraries never have any information or displays about the true unhealthy nature – moral and physical – of homosexuality. Why not?
There is a larger question that parents are having to grapple with when they confront this issue: What kind of human beings would want to push these horrible, destructive LGBT behaviors into the minds of young, vulnerable children – especially knowing that their parents don’t want their kids exposed to it at all? Normal people would never do this. Clearly, some very bizarre and disturbed people have been infiltrating the library profession.

What comes next? Our book on Health Hazards in that library!

Sadly, as the parents speaking at the Library Board meeting gave their impassioned pleas, the Board members just basically rolled their eyes. They couldn’t seem to care less. It was clear they think just like the librarians who work for them.
The parents are going to keep pressing this, however. As one parent said, “Trust us -- that display will not be there again.”
And since the head librarian was so adamant about the library “providing information,” the parents intend to insist that the library include our book, The Health Hazards of Homosexuality in their collection! That’s the information that the public really needs. A copy is already on its way! (Actually, this book should be in every library.)
These Temple, TX parents are among the best! We will keep you informed on this battle.


COMING NEXT: How the Concerned Christian Citizens event on Oct. 20 – featuring Texas MassResistance speakers – fired up the pro-family crowd!
Posted by Arthur Christopher Schaper at 5:50 PM