Sodom and Gomorrah in Sacramento

The allegations and confirmations flooding out of Sacramento are just too much to bear.

How is it possible that such a hostile workplace, that so many women (and I imagine men, too) would endure so much abuse, misconduct, and misbehavior from so many perverted members of the state legislature.

Republican Assemblyman Michael Duvall (R-Fullerton divulged his adulterous behavior with a lobbyist in 2009, all of which was caught on a hot mic, and he resigned the next day.

Democrat Raul Bocanegra groped a staffer when he was a staffer himself in the State Assembly. That took place in 2009. Here were are, 8 years later, he had run for office, he had lost his seat in 2014, then he regained the seat. 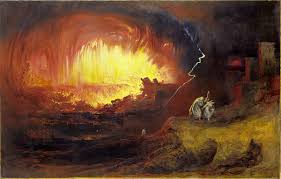 Now these allegations have come forward, and he is facing heat from all sides, even from Democrats and many liberal and feminist activists in his own district.

What is it about lawmakers and sexual perversion?This is a telling concern, and it hasn't just exploded here in California. In Michigan, two Tea Party Republicans had engaged in a heated adulterous affair, and they even faced charges for financial improprieties connected to their behavior.

Much of this is a result of the fact that we need righteousness to guide us, to keep us in peace, to allow the grace of God to flow in our lives. Men and women still have "the flesh", a fallen nature, the sin principle within our bodies. There is no getting away from it. Temptations will still flare up, but the more that men and women reckon themselves dead to sin and alive in Christ (Romans 6:11), the more that sin will have no dominion over us (Romans 6:14).

Just because someone is elected into a position of power does not mean that they are set free from fleshy temptations. In fact, they get worse. We should not be surprised in any way that sins are amplified as men and women seek to expand their own power and influence. The demands from lobbyists are plentiful. The people working in state legislatures have pretty much everything handed to them.

Where is the accountability? Whistleblowers face intense pressure to speak up and stand out, since they will lose their jobs, get displaced entirely from a legislative career. Many women are only now speaking out because of the rampant abuse which has been exposed in Hollywood.

Finally, I would say that more perversion proliferates in legislatures because they have been invested with considerable power, and they think that they are above the fray of conflicts. They believe that they are basically good and can trust in their efforts, which actually allows sin to amplify:

"For if ye live after the flesh, ye shall die: but if ye through the Spirit do mortify the deeds of the body, ye shall live." (Romans 8:13).

We need more than just to see legislative sessions open with prayers to God.

Men and women in Sacramento and in statehouses all over the country need to rest more in the grace of God, shed abroad to the world through the death, resurrection, and ministry of Jesus Christ!

Posted by Arthur Christopher Schaper at 11:46 AM