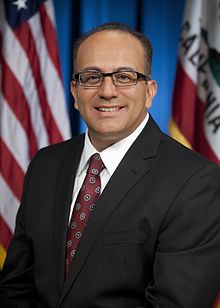 Raul Bocanegra was reprimanded for sexual harassment in 2009.

At the time, the Chairman of the State Assembly Ethics Committee, Ted Lieu, did nothing about it, besides give him a slap on the wrist.

Check out the outrage swirling in his district now:

California Assemblyman Raul Bocanegra was disciplined after a human resources investigation eight years ago, when a female Capitol staffer accused him of “inappropriate and unwelcome physical contact,” The Times has learned.

Eight years ago. How come we are only learning about this NOW?!

Elise Flynn Gyore said Bocanegra, at the time chief of staff to then-Assemblyman Felipe Fuentes, groped her and followed her in a manner she found threatening at an after-work event attended by legislators, staff and lobbyists.

“He menaced me that evening,” Gyore said in an interview, speaking publicly about the 2009 incident for the first time. She said the encounter left her so distraught that she filed a human resources complaint the following day.

A weeks-long investigation by independent attorneys hired by the Legislature concluded that “it is more likely than not that Bocanegra engaged in behavior that night which does not meet the Assembly’s expectations for professionalism,” according to a June 22, 2009, letter from the Assembly Rules Committee reviewed by the Los Angeles Times.

The letter, signed by the Assembly’s then-chief administrative officer, barred Bocanegra from subsequently communicating with Gyore and promised “additional appropriate action to help ensure there are no recurring issues.”

The Assemblyman apologized on Friday after being asked about Gyore.

“This unfortunate experience I was involved in as a staffer nearly 10 years ago was something I regret and learned from. As to the complaint filed, I fully cooperated with the investigation and after a comprehensive review by an independent body, which included interviews of over a dozen witnesses, the investigation was closed,” Bocanegra, 46, said in a statement.

“I will work closely with my colleagues to ensure all processes involving sexual harassment are handled properly and fairly and that no woman or man who has been harassed is retaliated against by members or staff,” said Bocanegra, who is not married. “Again, I’m deeply regretful about putting someone in this position and I want to apologize most sincerely.”

He is sorry now? We need to get new leadership and representation in Sacramento. "I'm sorry" has become all too easy for corrupt and perverted people to get away with all kinds of sexual battery and abuse.

This statement stands out very strongly to me:

Good. Stop covering up for the crap, and speak out the truth! 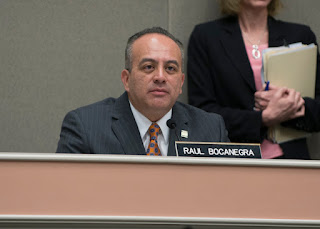 A group led by San Fernando Valley-area activists is calling for California Assemblyman Raul Bocanegra to resign following revelations that, as a top legislative aide eight years ago, he was disciplined after being accused of groping another staffer.

I wish I had known about this event.

I would have been there!

Pushing a stroller with her infant son, Tujunga resident Victoria Garcia marched into Bocanegra's Arleta office Wednesday with about a dozen other local residents and told the Democrat's staff their boss should resign.

Former Assemblywoman Patty Lopez also appeared at the event, which consisted of about half a dozen people standing on the sidewalk outside Bocanegra's office, taking turns speaking out against the assemblyman or the issue of harassment.

Wow! Patty Lopez is still fighting in her home district, even though the Democratic Party establishment did everything they could to push her out!

Lopez, who ousted Bocanegra in a surprise 2014 victory and then was defeated in a rematch last fall, didn't speak at the event because she said she didn't want her appearance outside his office to distract from the issue of harassment at the Capitol.

"It's not about me. I'm here to support the women," Lopez said. "People are still scared to speak out."

Of course they are scared! No one wants to lose their job and lose their career!

No one! I understand that sentiment, although harassment falls into a different

Then we have the corrupt Chairman of the California Democratic Party, who himself was accused of molesting children:

Party leader Eric Bauman said Bocanegra must "come to terms" over whether he can continue serving. He stopped short of indicating the assemblyman should step down and suggested that Assembly Speaker Anthony Rendon (D-Paramount) should help Bocanegra decide "what his future is going to be."

Oh brother! Yes, we will trust the foxes to run the henhouse. Yeah, sure, whatever ...

"I think Assemblyman Bocanegra needs to look into his own heart and decide what he's going to do," Bauman said.

Both Bauman and California Republican Party Chairman Jim Brulte, who appeared together at a Sacramento Press Club luncheon Wednesday, said their parties have zero-tolerance policies on sexual harassment.

No they do not. This cannot be an issue about political parties, but about principles. Let's face it: the Democratic Party has been pushing sexual anarchy for decades, and now we are seeing the results of this corrupt, disgusting behavior.

Brulte said he supports an independent review process, free of partisanship, to look into allegations of harassment in the Legislature.

Dozens of women have spoken out in recent weeks about sexual harassment in the Capitol, describing an atmosphere where unwanted touching and remarks are commonplace.

This has to stop. I cannot believe this much crap and corruption has been overwhelming the state legislature. This is unbelievable. I know that evil lurks the flesh of all men, but that so much would be overwhelming our own representative class? This is just too much. 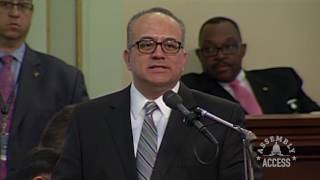 Here is an editorial from the Los Angeles Daily News:


Entrusted to represent and serve the public, elected officials must be held to high ethical and moral standards.

Last week, the details of a 2009 sexual assault by Assemblyman Raul Bocanegra, D-Pacoima, were made public by his victim, Elise Flynn Gyore.

In light of this revelation, Bocanegra cannot be taken seriously as a representative of the people who elected him without this knowledge, and we ask that he step down immediately.

This is the liberal-leaning Southern California News Group publishing this statement.

Could the outrage be any more stark on this matter?

Finally, the double-standard on misconduct and impropriety is getting taken down a notch.

This hatred of personal respect and honor needs to be destroyed. We cannot have representation which refuses to honor the concerns and care for all staffers--male and female.

Bocanegra has a black eye from these revelations. Enough is enough.

He needs to go.
Posted by Arthur Christopher Schaper at 10:44 AM