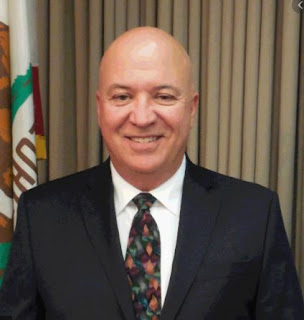 I talked with him about getting the city of Torrance to go on record opposing LA County District Attorney George Gascon.

He just blew me off : "Not gonna happen."

The gist of his answer was this:

The city attorney does not approve of it, and it's going to hurt the police department.

Really. That was his excuse.

And last year, Griffiths was more than happy to (rightly) open up the city and defy the lockdown orders from LA County Board of Health and the Governor of California.

Now he is worried about potential displeasure from the city attorney? Or lawsuits? Give me a break.

Residents of all backgrounds in the city of Torrance want LA County DA George Gascon OUT! Eighteen of the 88 cities in Los Angeles County have gone on record official issuing resolutions of No Confidence, including Rancho Palos Verdes and Manhattan Beach. Torrance City Council should not be dragging their feet on this issue, and that includes Councilman Griffiths.

This attitude of ignoring the will of voters to cater to civil servants in city hall is a growing problem in the city of Torrance. Elected officials on the dais are not following through on their promises, and they are following orders from the city attorney, when they should be listening to the residents of the community.

Yes, the corrupt, pro-criminal district attorney George Gascon has reopened the case against two of Torrance's police officers because of their officer-involved shooting against Christopher "Cowboy" Mitchell. The previous DA, Jackie Lacey, declined to file charges, and even asserted that the officers rightly acted in self-defense. A growing audience of viewers and commentaters have also asserted that the two police officers acted in self-defense when one considers the full contents of the video. Am I saying that every police officer in the city of Torrance is good, or that the LA County DA should not pursue officer-involved shootings in the event of foul play? Of course not.

But in this case, and with what the city of Torrance is potentially facing with a pro-criminal county DA, and based on what residents have been saying for the last three weeks, it's time for the city of Torrance to go on record and issue a Resolution of No Confidence in George Gascon. There is nothing wrong with the city decrying the LA County District Attorney's bad behavior, disgraceful conduct toward constituents, and his pro-criminal policies which openly violate state law. This does not cast aspersions or undermine the well-being of the police officers who face investigation. In fact, the fact that the current, corrupt DA insists on reopening this case shows that he is partisan and political, rather than principled and pragmatic towards his office. All the more reason he needs to go!

And all the more reason that the city of Torrance needs to issue a Resolution of No Confidence in LA County DA George Gascon!

Gascon is putting murderous thugs back on the street, and trampling on the needs of victims and law-abiding citizens generally. He needs to be recalled.

And the city of Torrance needs to go on record opposing him.

Contact Councilman Mike Griffiths, and DEMAND that he support a resolution of no confidence against corrupt, pro-criminal LA County District Attorney George Gascon. Remind him that he works for the people, not the city attorney.