Over the last three days, I have exposed a number of people on the Torrance City Council, men and women who are not taking a firm, courageous stance to put the city on recording with a Resolution of No Confidence in corrupt, pro-criminal Los Angeles County District Attorney George Gascon.

Now, I want to focus on one of the worst mayors in the state of California, and certainly in the history of Torrance: Pat Furey. 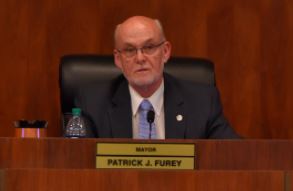 This guy got elected because two more qualified candidates for mayor split the vote. This happened two times in a row, and it's quite disgusting. This guy has no business sitting on the dais. He violated campaign finance laws in the city of Torrance. He has been one of the rudest, most incompetent heads of the city in recent memory. He cannot even control a meeting properly, ever since Black Lives Matter burst into the city council chambers in 2018 and began harassing the council and residents in the chambers.

This man is a disgrace. Jared Sidney Torrance is rolling over in his grave, to think that such perverted incompetence has become so commonplace.

This guy can't even take the lead to push forward a Resolution of No Confidence in Los Angeles County DA George Gascon.

Torrance deserves better. We need real leadership on the city council, not some wishy-washy weakness that cares more about virtue-signaling than actual virtue.

Pat Furey used to be a prosecutor in the Los Angeles District Attorney's office! One would think that he would go on record opposing Gascon and supporting a Resolution of No Confidence in George Gascon.

What is his problem?!