For the last three months—and ongoing—our activists and their contacts and supporters in the city of Downey have been contacting you to reject all of this LGBT promotionalism.

It is sickening and disgusting that the city council insists on pandering to another so-called minority, aka a sexual minority. The latest attempt, a discussion about flying the PRIDE Flag at city hall, is deeply offensive. 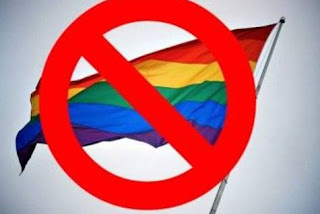 According to common law, natural law, and even proper constitutional law, there is no such thing as a “sexual minority.” Just because there is a smaller group of people who engage in certain behaviors, that does not mean that those individuals constitute another “minority.” I must remind this council that there are no ex-blacks, or ex-Cubans, but there are ex-gays and former transgenders. Their very existence proves that the whole LGBT movement is based on a lie, i.e. that people are “born that way,” and therefore that group should receive special celebrations and treatment.

Furthermore, I must remind the city council that the whole PRIDE month hagiography is based on a lie. The Stonewall Riots in 1969 had nothing to do with New York City police officers harassing peace-loving homosexuals and transgenders trying to enjoy a drink in a seedy bar. The Stonewall Inn was a notorious mob bar, and that bar was not paying their liquor license fees. For that reason, the bar endured one raid after another because of their failure to comply with New York City’s municipal codes.

So let’s dispense with the politically correctness nonsense that PRIDE Month or LGBT Month is somehow worthy of celebration.

Furthermore, it is indeed quite ironic that LGBT activists like Councilman Trujillo want to flaunt their gayness and have a picnic, a resolution, and a flag ceremony to celebrate their perversion, yet numerous residents have informed me that when he was running for city council last year, he never once brought up his sexual preferences. Now, after getting elected, he wants the whole world to know about his sexual conduct. This more or less holds true for Councilwoman Alvarez, as well.

This whole LGBT promotionalism is just so despicable. It is wrong for politicians to push their narrow agenda onto a city, when they had campaigned for office by pledging to deal with local bread-and-butter issues like street repair, public safety, and security for the business environment in the city.

Homosexuality and transgenderism should not be promoted in any city. Just because a number of government entities have caved to this agenda does not mean that Downey should do the same. Downey residents called on the school board to reject the sexually explicit, pro-LGBT sex-ed curriculum “Teen Talk.” Residents are now speaking out against the further promotion of LGBT themes and ideologies in city hall, as well.

The city must not promote behaviors, identities, and ideologies that are harmful to the individual and to the community as a whole. Homosexual conduct leads to an average decline of 20% in the lifespan of individuals. Transgenders struggle with a staggering 41% suicide rate, and in even the most LGBT affirming countries. There is a growing opposition to LGBT promotion and domination in the public square, as witnessed in a recent USA Today poll (Click here)

Last of all, the city needs to stop promoting narrow special interests and distinct segments of the city population at taxpayers’ expense, and at the expense of constitutional unity. For example, the Greek-American community hosts their annual celebrations on their own dime. Why do LGBT activists think that they have a right to city funds to promote their destructive behaviors in the community? As a reminder, people are born with a certain ancestry or ethnicity—but they are not born gay or born in the wrong body.

The Downey City Council should demonstrate its true commitment to unity and civic harmony and reject the hoisting of a PRIDE Flag or any other narrowly tailored banner. The only banners which should fly over city hall are the American Flag, the California Flag, and the POW “You Are Not Forgotten” Flag.

To all readers and visitors, please contact the Downey City Council and urge them to reject flying the PRIDE Flag at Downey City Hall.

Posted by Arthur Christopher Schaper at 9:38 AM