The Massachusetts GOP has a problem.

It has homophobic leadership. Homophobic in the sense that they are literally "afraid of homos", as opposed to a profound, principled dislike of their behaviors.

That is truly homophobic. Mountain is so afraid of upsetting LGBT interests in the state of Massachusetts, that he will do whatever he can to shame people who speak up for natural marriage, life and family. He's a homophobic bigot. 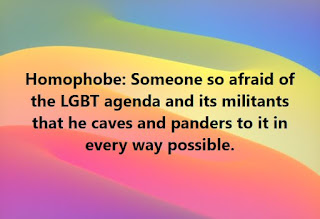 The particular fight revolves around Massachusetts GOP State Committeewoman Deborah Martell, who wisely and properly declared that children need a mom and a day. Her remarks denounced a gay "Republican" named Jeffrey Sossa-Paquette who adopted children, all while being falsely married to another man.

Here's what she wrote:

“I heard he was a ‘married’ homosexual man, who adopted children. I was sickened to hear this ..."

She made this statement privately in an email. Frankly, more people should be disgusted by it! The bigoted LGBT militant Sossa-Paquette insisted on making it public so that he could shame her and then "cancel" her.

Sadly, Republican "leadership" in Massachusetts feels compelled to LGBT and accommodate it. Tom Mountain is the worst example, acting as a failed Vice-Chair of the MAGOP, hoping that he can get the top spot by throwing MAGOP Chairman Jim Lyons under the bus.

This LGBT virtue-signaling is disgusting. There are children involved, for starters, and then there's the shameful disregard for the very basis of our culture, or for any civilization, for that matter.

Check out the nonsense that Tom Mountain spouted off about Deborah Martell:

"What she said reinforces every negative stereotype about Republicans, that we're backwards, we're intolerant, we don't accept people of other persuasions," said Tom Mountain, vice chair of the Massachusetts GOP.

If one does a proper review of history, people will find that homosexuality and other sexual paraphilias are actually quite old, backward, and unthinking. True progress ensues in every culture which values and promotes the nuclear family, rejects sexual degeneracy and perversion (including homosexuality).

True diversity, inclusion, and tolerance is only possible in the confines of natural marriage, life, and family.

Every effort to pander to this agenda is nothing short of homophobic hypocrisy.

Based on your remarks on the radio and elsewhere, you should be the one to resign.

I guess you haven't read the RNC 2016 Platform or even the State GOP platform.

Both support the values Debbie described. I am one of thousands of Massachusetts Republicans whose beliefs follow the RNC Platform, get this, One Hundred Percent!

We expect our leadership to do the same.

You would fit in well with the Democrats and their attempt to make a one-purple-party system in the state.

By the way, what were your comments when the radical homosexual groups sued to shut down Catholic Adoption Services? They were doing a great job of placing children with a mother and a father that they deserve, as is the natural way.

You are the new "homophobe," fear of LGBTQ and caving into their demands.

Here is another letter issued to the failed, flailing Vice Chairman of the MAGOP:

You should be ashamed of yourself for attacking MAGOP Chairman Jim Lyons, but more importantly for attacking State Committeewoman Deborah Martell, simply because she called adoption by false aka sodomite couples "disgusting".

Two confused men who abuse their bodies with each other, and who adopt children to normalize their perversion, is disgusting. It's a matter of biological and psychological well-being that adults put the needs of children ahead of themselves. Sasso-Paquette and is homosexual lover are making their need for affirmation more important than the children! EVERYONE should be disgusted.

Children need mothers and fathers, not two moms, not two dads. The growing body of research affirms this necessity. You need to get a copy of MassResistance's book "The Health Hazards of Homosexuality" to better educate yourself on the matter.

And I believe you will have the time to read that book, because ...

You need to resign from the MAGOP State Committee. You have put hollow, selfish political and professional ambitions ahead of the well-being of the state and Massachusetts families as a whole.

If I recall, you are the one who shamed the Trump Administration because you told everyone that you got COVID-19 at a White House event, as if it was their fault! There was no need for that kind of self-promotion. And wasn't it you just a few months ago that was crying for help because Antifa thugs were driving you and down the street where you live? Now you are running around to every newspaper in the state to tell them about how awful the MAGOP is. What kind of loyalty, decency is that?

We all know what this is all about. You are thinking that you are going to get a state job with the Baker Administration by bad-mouthing Chairman Jim Lyons and Deborah Martell. I can tell you that such a move is not going to play out very well -- and you can also forget about becoming the next MAGOP chairman, since no doubt the state committee is going to throw you under the bus, since you went out of your way to throw everyone else under the bus.

Mountain, you have made yourself nothing more than a mole hill. Resign now.

Contact Tom Mountain RIGHT NOW, and tell him to resign!