To the leaders of the CAGOP:

I have no choice at this time but to call for the immediate resignation of current CAGOP Chairwoman Jessica Patterson.

n her latest offensive affront to the state party, here she is glamorizing a confused man who thinks he is a woman: Gina Roberts.

This is a disgusting disregard for the National as well as State Republican Party platforms. Furthermore, Mr. Roberts pressed herself into a local chapter of the California Republican Women Federated, becoming the first male president of a Republican club which is designed for WOMEN. This is a complete dishonor to women, as well as to men and the biological beauty of the differences between the two sexes. He also refuses to go on record whether she would oppose biological males such as herself competing against women in women's sports. Roberts has also declared that he is ready to use vexatious litigation to force any private firm to let him use the bathroom of his choice. This is not "Live and Let Live" Conservatism by any means.

You can see his statements in this blog post for more information:

Transgenderism is a mental illness, not a civil right. A political party that cannot tell the difference between male and female, and that cannot understand that a man cannot become a woman has no business seeking political power. This is a travesty, a joke, and is turning the Republican Party into a laughingstock.

I am astounded that our failed leadership in the state California Republican Party is so determined to pander to corrupted, broken identity politics, instead of investing in a serious grassroots movement to engage, enrage, and organized frustrated citizens to fight back and take back their local, county, and state governments in California. Hispanic voters are switching rapidly to the CAGOP, and they are substantially pro-life, pro-family, pro-America. They do not support this LGBT madness. Not one bit. 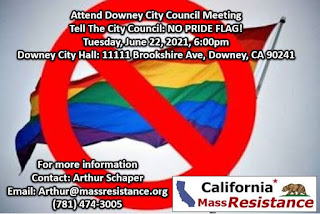 This past Tuesday, I was at the Downey, California city council meeting, where the vast majority of residents in the majority-Hispanic community spoke out against the city council's decision to fly the LGBT Pride flag over city hall. The current city council is 4-1 Democrat, and the only Republican on the council, Mayor Claudia Frometa, bravely voted AGAINST that perverse proposal.

The Republican Party needs to stand for cultural as well as fiscal conservatism. Chairwoman Patterson has clearly chosen to disdain the cultural bases of our party. She needs to step down. Patterson has repeatedly been criticized in local CAGOP party circles as well as conservative newsletters and blogs for doing nothing to build the state party. She is more beholden to a corporate, consultant culture class that wants to make money rather than shape the culture and win elections. It is of little consequence to me that she supposedly won re-election as chairwoman earlier this year, considering all of the voter problems and by-law violations which had occurred and have been widely documented.

Jessica Patterson, it is time for you to step down. I expect you to tender your resignation shortly.