First of all, I wish to commend Councilman George Chen for taking the lead to seek an agenda item for a Resolution of No Confidence in LA County District Attorney George Gascon. There can be no delay for the city to go on record demanding the removal of that despicable partisan masquerading as a the chief law enforcement officer/prosecutor in Los Angeles County. 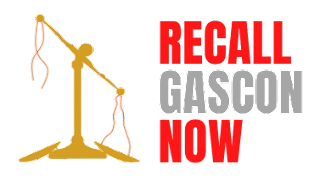 From LA County Sheriff Alex Villanueva to retired LA County District Attorney Steve Cooley, there is a wide consensus of elected officials, current and retired, who recognize that George Gascon is neither qualified nor equipped to serve as the District Attorney for the most populous county in the United States. His reckless disregard for the law, his utopian commitments to dismantling the execution of justice in name of "social justice", and his flagrant disdain for the residents of this county have made him a dangerous laughingstock to the entire county.

I just received word that in addition to dismantling the Hardcore Gang Crimes prosecution unit in the LA County DA's office, Gascon has disbanded The Los Angeles County District Attorneys Investigator’s Special Enforcement Team (SET). This unit was responsible for apprehending sexual predators who have failed register as sex offenders in the county. This is extremely alarming!

As a cursory reminder, Gascon has also done (or failed to do) the following:

·  He has refused to prosecute numerous crimes, including numerous misdemeanors like resisting arrest

·  He is seeking sentences that do not fit the crimes of defendants, including a rejection of all special enhancements

·  He is allowing violent 17-year-old repeat offenders to be tried as juveniles, avoiding more severe yet necessary punishment

·  He is pushing for motions to release all defendants who have served 15 years in state prison, regardless of how serious the crime may be

·  He has routinely dismissed the concerns, well-being, and welfare of victims and witnesses, insulting them in public hearings while leaving deputy DAs out of parole hearings

Deputy prosecutors in his own office have publicly denounced him, too:

Crime has taken on some unsettling trends in Los Angeles County and District Attorney George Gascón has received some backlash for his response to it. Gascón speaks with @LesterHoltNBC about reforming the city’s criminal justice system. pic.twitter.com/8PhGVE0W4K

Regarding Gascon's decision to reinvestigate officer-involved shootings, Gascon brought in a criminal defense attorney, and Gascon was going to allow this defense attorney to continue representing other criminal defendants at the same time. This is a massive conflict of interest, a blatant abuse of power, and a corruption of justice. A judge had to weigh in on this decision and order the attorney to drop representation for other defendants.

Gascon must receive a Vote of No Confidence from the city of Torrance.

Thank you for your time.

Please contact the Torrance City Council, and urge them to support the Resolution of No Confidence in George Gascon. We need four votes on the council to support this resolution, and just because a clear majority of of the members supported an agenda item does not mean that they will vote for it in the end.

Here is the Agenda Item for the June 22, 2021 Torrance City Council Meeting

Here's the email address to submit public comment for the meeting:

Here are the contacts for the city councilmembers individually: