Kudos to Alex Jones for sponsoring a debate between Robert Barnes and Nick Fuentes.

Here's the link. I cannot share this link on Facebook, since they are doing the bidding of Communist China, and they will not allow Alex Jones' program to be posted on their site. After all, Jones has gone out of his way to expose all the evil that the Chinese Communist Party is doing around the world. 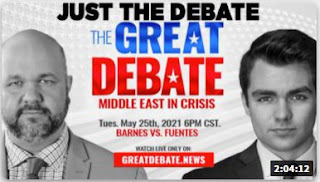 His debate debunking anti-Zionism, anti-Semitism, and pretty much upended the Groyper obsession with denouncing Israel while ignoring Islamic militancy and promoting Iran was excellent.

Here's some takeaways from the debate:

Watching people who hate Israel defend IslamoFascism as totally safe and no problem for America might be a hint that they are not on the winning side...

After the debate, Barnes exposed a number of Fuentes' despicable views (all culled and shared by TPUSA's Benny Johnson)

And here was a funny meme, too:

It was a fun debate. Don't complain too much, groypers. pic.twitter.com/iyJi724LiE