To the Westminster City Council:

My name is Arthur Schaper, and I am the Organization Director for MassResistance. We are the international pro-family group that makes the difference.

For over 25 years, we have alerted the public to the inherent dangers and destructive aspects of the LGBT agenda.

I am aware that Westminster has a strong, conservative, pro-family tradition, and that tradition must remain strong.

A city government must not bandy about banners on public property unless the theme and message speaks to and serves the needs of every resident.

The PRIDE flag only represents a very small segment of the population. These so-called sexual minorities (homosexuals, transgenders, and the like) are not truly minorities in any serious sense. There are no ex-blacks. There are ex-gays and former transgenders. People are not born gay, transgender, etc.

In fact, it is quite offensive to compare the sexual deviance of a segment of the population with the civil rights movements of ethnic and religious groups, such as Italian-Americans, African-Americans, Christians, Jews, and the like. 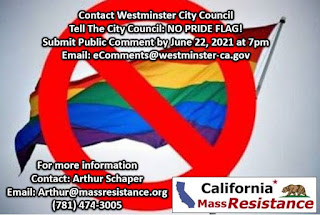 Homosexuality and transgenderism are based on false ideas, failed ideologies. Such behaviors are a misuse of organs, much like shoving a straw up one's nose to drink, or using one's elbow to scratch one's ears. In fact, such behaviors are associated with numerous harmful outcomes, including a decrease in one's lifespan as well as the spread of venereal diseases and other cancers. Transgenderism leads to a staggering 41% suicide rate, and this statistic occurs in the most LGBT affirming countries.

Last of all, in order to ensure the civic unity and harmony of any community, only three banners should fly over a government building:

And perhaps a fourth flag, if there is an official banner for the city of Westminster.

I urge the city council to adopt a binding ordinance in which only those flags will be allowed to fly on city property. That reform will ensure that no future city council can ever politicize a solemn venue such as a government building, which exists to serve the needs and represent the rights of all citizens, particularly the residents of Westminster.