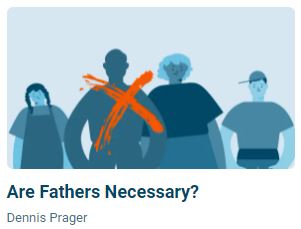 Dennis Prager just released a video about the importance of fathers.

When I was growing up, however, my mother gave off this perverse impression that Dads do NOT matter. She even reduced the roles and importance of fathers to "provider and protector." She also said nasty things about men in general, since she was so bitter towards her father and her husband, and of course that would slop onto me, too.

I look back on all of that abuse, and it finally all makes sense what I was going through as a kid. My mother was indeed, crazy, but more seriously, she was so bitter and angry.

During high school, our mother (my sister and I) were walking around the Old Ports o' Call in San Pedro. We stopped at one of the tables near the fish market, and she led us through another one of her legalistic Bible studies.

I remember saying to her: "It seems that moms are all that matter. Why are Dads important, then?"

I get sick to my stomach when I think about this statement. I actually said that, and at the time, I really believed that fathers did not matter. So much of the hate that had been coming out of my mother's mouth was so denigrating towards men. It was a very sad time.

It was such abuse that my mother treated fathers in general with such contempt. But Dads do matter!

Posted by Arthur Christopher Schaper at 11:09 AM