This was the headline in the Daily Breeze after former Torrance City Councilman Tim Goodrich announced his resignation from the city council.

The city council is "striving" to fill the seat, reads the headline. Really? This is journalism now? 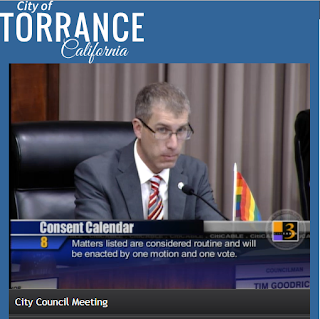 The newly appointed councilmember will be in office until the regular municipal election scheduled for June 2022.

The City of Torrance has decided to appoint someone to fill the remainder of the term left vacant by the resignation of at-large Councilmember Tim Goodrich rather than incur the cost of a special election.

The newly appointed councilmember will be in office until the regular municipal election scheduled for June 2022.

Goodrich’s last day on the panel was June 1, a little more than a year before his second four-year term expired.

Upon announcing his resignation at a council meeting in May, he said he was stepping down to spend more time with family and on his business commitments.

Candidates to replace Goodrich will be interviewed in private, said Torrance City Clerk Rebecca Poirier, with nominations and the appointment taking place publicly at a regular council meeting on July 13.

To apply, you must 18 years of age, reside within the City of Torrance and be registered a voter within the city.

Applications must be returned to the City Clerk no later than 5 p.m. on Wednesday, June 30, 2021. Postmarks are not accepted. If emailed, time of email must be 5 p.m. or earlier.

Again, the headline stated that the city council was "striving" to fill the seat vacated by Tim Goodrich. Where is the striving? Where is the hardship?

Here's a definition of the word, at the least:

strive: make great efforts to achieve or obtain something

The city council did not have to make great efforts. Eighteen people signed up to seek the position. The city council selected a replacement after three votes. It was a pretty quick process.

Posted by Arthur Christopher Schaper at 9:35 AM