And they said that it could not be done.

But it has been done!

In the wee hours of June 23, 2021, as their council meeting from June 22, 2021 went into overtime, the Torrance City Council voted for the Resolution of No Confidence in corrupt, lawless, pro-criminal Los Angeles County District Attorney George Gascon! 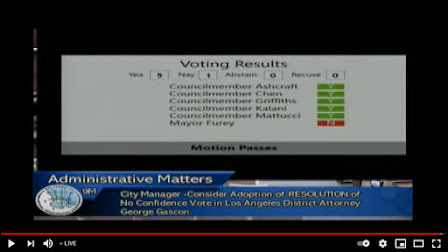 The final vote tally was 5 to 1, with former police officer, child abuse prosecutor and unpopular mayor Pat Furey voting No.

In spite of the fact that the mayor was so perversely recalictrant about this measure, the rest of the city council voted for the Resolution.

Many residents and other activists in Los Angeles County told me that this would never happen. Oftentimes, the Torrance city council avoids passing resolutions stating a controversial position on an issue or a candidate.

The city councils in the past have often hewn a consensus conservative position, avoiding difficult issues as much as possible.

The initial pushback that I received from some of the city councilmembers on this issue a few weeks ago was particularly disturbing, and even infuriating. When I spoke to Councilman Mike Griffiths about this resolution, he just cut me off: "Not gonna happen." That kind of dismissive attitude really rankled me. I exposed his opposition the next week, and that lit up a lot of residents in the city.

Councilman Griffiths expressed ongoing dismay or disinterest in supporting the resolution earlier this morning, too. Ultimately, though, he voted for it. The kind of outrage and activism that I took on, that is precisely what it takes to get things done in politics: "In politics, nothing moves unless it's pushed." Griffiths felt the heat, and he saw the light.

I did the same thing with the other city councilmembers who had been sitting on the fence or refused to give a statement of some kind on this very commonsense issue. Not all of them returned my calls, but they got the message, and other people in the city got the message, too.

This outcome shows that you can fight city hall, and win.

Some people--including some of the city councilmembers themselves--did not like my tactics calling them out publicly for not taking a stance or rudely brushing me off.

But my approach worked, and many residents contacted me afterwards to confirm that they wanted the city council to do the right thing, denounce George Gascon, and go on record issuing a Resolution of No Confidence.

We did it, folks!

Posted by Arthur Christopher Schaper at 1:31 AM