Homosexuality is a mental illness, an emotional disorder.

I even read a new phrase to describe homosexuality: "same-sex attraction syndrome."

Wow! I think that characterization is accurate and incumbent upon all of us as we speak the truth about homosexuality, transgenderism, and the LGBT movement as a whole.

I posted an article calling on the Downey City Council to reject the PRIDE Flag from flying over city hall. 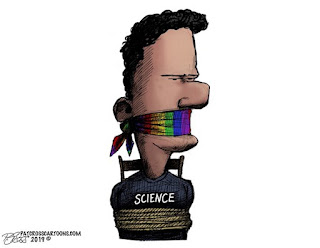 Here's a noxious, vile response that was posted on the blog. I will break it down into pieces. The sheer outrage and vanity of the response caused me to burst out laughing. It's quite hilarious, when you think about it! (Reader discretion advised):

This is the biggest crock of self-important, ignorant, sesquipedalian, cockamamie bullshit I’ve ever read. So yeah let’s dispense with the political correctness, you fucking retard. You talk about the increase in suicide in homosexuals and transgender individuals, without taking into consideration how those particular individuals are treated by their own families and society as a whole.

I have mentioned many times in blogs that even in the most tolerant, accepting places, homosexuals and transgenders suffer these shocking health consequences. These are behaviors that should not be normalized, let alone celebrated.

Pride month is not about celebrating a sexual minority (as your ignorant ass puts it). It’s about showing people within that community that it’s ok to be homosexual, that it’s ok to be queer, or transgender. That even though their own family and community might turn their back on them, it’s ok to be who you are. I see how you didn’t bring up the Pulse nightclub shooting, or how people routinely discriminate against sexually diverse people when they’re trying to raise their own families and live their own lives.

WRONG (as usual). Homosexual celebrations and demonstrations in the public sphere are all about ... celebrating the perversion. It is NOT OK to live out homosexual conduct. It's just that simple. There is no reason for anyone to have to endure such ugly behaviors in the public square.

If there really was nothing wrong with being gay, trans, etc. - then why do they need to celebrate PRIDE parades in the first place?

Yeah I’ve met gay couples with children, and they’re some of the most loving parents I’ve ever met. You talk about natural law, what natural law? Have you seen finding Nemo? If that movie was following “natural law” as you put it, it would be a whole lot more perverse than you think. Water turning frogs gay? Frogs are sequential hermaphrodites. Male penguins often form bonds with other male penguins to raise orphaned chicks. Where’s your natural law?

No, it is not loving for adults to deprive children of a mother and a father. That is a patent lie.

Second of all, all of these references to so-called "gay animals" is absolute nonsense. I have never understood why honomsexuals must resort to using animal conduct to justify their perversion. Animals do not attempt to bond or sodomize other creatures, and any interactions of genitalia among animals has more to do with establishing dominance than actual sexual conduct.

The male penguins example is just ludicrous. Two males working together to raise a check in no wise indicates that they are homosexual. This was a terrible argument, and thus there is no surprise why this LGBT militant must resort to cursing and swearing throughout the post.

Just repeat after me,

“My name is Arthur Schaper, and I am a massive homophobe. I try to hide my homophobia behind pretty words that make me sound smart, and paper-thin arguments that ignore, contradict, or disregard facts about how homosexuals and sexually diverse people are treated in our society.

The real repetition lies in this man (or woman's) own mind. He wants to engage in all of these destructive behaviors and ignore facts.

Oh, and it gets better (no pun intended):

"I fantasize about all these perverted homosexual acts that will never occur to me, mainly because I have the personality of a sea urchin and a gay man would rather fornicate a cactus, than hit on me. I worry more about chastising a marginalized group of people, than actually understanding their struggle as a community. I make a fuss about something that doesn’t affect my daily life at all, because it gives my life purpose, especially after the viagra stopped working.

He is clearly projecting his own inadequacies here. Why would he be writing about sea urchins in the first place? This is how LGBT militants act. This is what they resort to time and again.

"My moral compass is based upon a book that has a lot of good teachings, yet I spend my time judging people to make up for my own shortcomings. And I do all of this, because I am afraid that if I ever find myself in a homosexual situation I’ll want to know what dick tastes like.”

Again, this guy wants to talk about people's private parts and taste them. Truly despicable and deplorable, and yet he announces that homosexuality descends into time and again. He makes the point about how deranged and broken these behaviors really are, without any help from me.

As a final note, Arthur. To harken back to the words sexually diverse people have heard throughout history; keep it to yourself. Nobody wants to hear a sad sack of shit like you complain about how listening and understanding a small portion of society somehow compromises you own personal freedom. This is America, bitch. Everybody gets in on the freedom.Go pound sand, Asshole

I can't give him credit for originality. That is not the first time someone has called me an "asshole." It certainly brings out his projections, though, does it not? Why are homosexuals and their advocates so obsessed with anuses? Of course, I do not (nor should I) have to answer that question.

There is nothing like exposing and decomposing the hatred of self-loathing men such as homosexual militants. It is truly sad what they reduce themselves to in order to defend behaviors which are inherently disordered and broken.

Posted by Arthur Christopher Schaper at 7:56 AM