Breitbart News exposed the shameful hit piece that they were going to push next.

They have no decency left, do they?

The headline for the Breitbart News website listed the following: 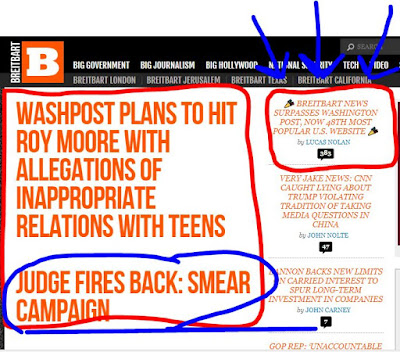 Then they announced that their viewership or readership has just surpassed the Washington Post. We see some real winning her.

Judge Roy Moore is everything that Washington fears. He won't do what he is told by K Street Swamp creatures. He will work with the conservative phalanx represented by Mike Lee, Ted Cruz, and Rand Paul.

He is pro-life, he is pro-family, and he is not afraid to fight for those Judeo-Christian values which make all the difference in holding together and prospering a free society.

These are some pretty nasty hit pieces. Moore has been fighting for every necessary reform and change. He defeated the GOP Swamp. Now the Democratic Swamp is hoping to divert from their own massive, rampant sexual perversities to promote their own failing candidate Doug Jones.

This is the lowest low yet for yellow, mainstream media journalism.

Jeff Bezos has already covered up for his financial misdeeds in Europe. He faced some heavy fines, which his news network predictably refused to cover in his newspaper.

These are pretty hefty tactics. What is going on?
Posted by Arthur Christopher Schaper at 11:50 AM