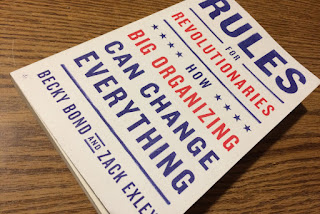 I started looking at this Bernie-crat manual for political organizing called Rules for Revolutionaries.

Becky Bond and Zach Exley are true believers, and they really, really want the Revolution to succeed.

They put together a list of 22 steps which progressive organizers need to follow in order to ensure the left-wing paradise becomes heaven on earth.

Unfortunately for them, their efforts focus only on process, not principles. What these liberals do not realize is that their ideas do not work. They are basically peddling the argument that 2 + 2 = 5, which it isn't.

And all the militant protesting, organizing, and activism in the world cannot change that. They are not going to change gravity or upend natural law, or distort the dismal yet necessary realities of supply and demand.

This passage to me exemplifies everything wrong with these Bernie-maniacs, and why their organizational obsession is simply not going to pay off for them. In Rule #5 "Get on the phone!", Zach talks about meeting a leftist from Tennessee ... on the phone.

He relates this inspiring account of time and trouble, which also inadvertently showcases the sinister problems that the Left has when dealing with something called "Reality":

"Somewhere between my little town in the Ozarks and Springfield, Missourii, I called Corbin, and found myself in a conversation with a left-wing character whose East Tennesse drawl was music to my Connecticut-born ears." (pg. 42)

Right away, the East Coast elitism breaks through. The Democratic Party has all but lost touch with every Southern voter. They did elect on Democratic governor in Louisiana, but only because the Republican candidate was such damaged goods, the retiring US Senator David Vitter, who was damaged goods after appearing in a Washington DC Madam's phone book.

Notice also how Zach calls him a "character", as if he's some kind of oddity rather than a human being.

Now check out what Zach learned, or what he "pieced together" from talking to him:

"He had no background in politics whatsoever. He had inherited a small, failing factory from his grandfather, one of the last surviving manufacturers of East Tennessee's once-thriving furniture industry. He was sick and tired of watching his community fall into resignation that there was no way to make a living anymore--and he fought to keep the factory open."

What do we see here? Globalism at work, something that was putting American workers and manufacturers behind while enrich copyright thieves, currency manipulators, and slave laborers in third-world countries. In fact, Chinese-made furniture pushed him out of business, and the American-made lathe he had purchased pushed him faster toward that sad end.

Question: why are the American products more costly? I submit that regulatory burdens and multiple tax demands are part of the problem. Very serious. These are issues which Trump championed. He wanted to Make America Great Again!


The factory ended up closing, and Corbin had to find another line of work.

"[H]e went to culinary school, thinking he'd become a chef. And he did--a really good chef. But being a good chef meant that he found himself usually serving rich people, which he found made him angrier and angrier over time."

Huh? So now Corbin is placing all the blame for his lot in life because of "rich people"? This is envy, and it's not an admirable trait at all. These "rich people" are not some special breed of human that was just born with talent or wealth. They worked for it, just as Corbin worked to save his factory or to become a chef.

Here we see the core mindset of socialists, of progressive Democrats, of liberals in general: envy. They want what others have, but believe that something or someone, some big grand puppet-master is pulling all the strings and preventing them from succeeding. The truth is that the every expansive government which they want is the prime driver for why their dreams get frustrated or deferred. Obama's push for the Trans Pacific Partnership would have driven more businesses and factories to close while overseas construction and competition would have thrived.

Bernie Sanders and President Trump understood the importance of putting American businesses, American workers first. China does that, and so does Mexico. Why can't we?

Now this part really shows why "The Revolution" is looming toward failure:

He realized he couldn't take it anymore one day when a group of businessmen walked away from a half-full $3,000 bottle of wine. He quit and started a food truck ..."

OK, so he took his anger and did something constructive with it. OK, but still, this anger at wealthy people not finishing off an expensive bottle of wine: could someone please tell me what justifies his anger? Corbin, it's their money, and they have lots of it. If they want to spend their money that way, they are entitled to do so--it's their money.

Once again, Corbin is jealous. He wants what they have. He can choose to be angry if he wants to, but it really isn't justified. Where do these left-wing agitators get these ideas from?

Corbin's food truck business was successful, but the truck would catch fire. Corbin also had no insurance, so he was out of luck. Or was he? Being a business owner is a tough calling. For someone to have success as quickly as this left-wing Tennessean is pretty astonishing, I think. Why wasn't he able to purchase insurance for the truck? No one ever claimed that going into business was going to be easy, and that there would not be hard-hitting problems along the way.

Where do they get this idea from that life is going to be easy, that there will be no hardships to overcome? It seems that Corbin never considered that all those "rich people" faced their own kinds of hardships, pitfalls, and difficulties while acquiring their own wealth. Why this double standard?

What was the last thing that he did?

"[He] became a digital campaigner and fundraiser using GoFundMe and was able to raise enough money to start over."

Look at the drive of this young man. He had a factory, lost it. He became a chef, well-renowned apparently, if his clientele were wealthy enough to afford $3,000 bottles of wine and not finish the bottle. He started another business, and even after tragedy stuck, he was able to raise money and start over.

Notice also that he uses a GoFundMe--another tribute to American innovation.

Even under the destructive, anti-prosperity Obama administration, this man did quite well! He started over, people! He was able to make it!

And yet ... this guy ended up selling the business to become a full-time volunteer for the Bernie Sanders campaign. The same campaign that wants to tell everyone in the country that "The rich are getting richer. The poor are getting poorer. No one can make it, because the Top 1% or preventing the rest of us from making a decent living and enjoying the American Dream."

The very narrative of this Bernie volunteer named Corbin belies everything that Bernie Sanders believes, preaches, and imposes on everyone else.

What a startling account! Quite ironic, I might add. This man faced many obstacles thrown in his way because of special interests--like corrupt, unfair trade deals which benefit China at the expense of American workers and manufacturers. How about the probably regulatory and tax burdens which hurt small business owners?

Yet the resiliency of this Southern was captivating. Nothing stopped him, He started his own business, he lost everything, then he started fundraising, and he went back to work again. That is the American Dream, everyone. This country is not slanted with a few political connected elites who keep everyone else down. If you don't like the fact that other people have more money than you do, then go do something about it. You can. There is no systemic racism or classism keeping you down.

Bernie Sanders preaches this class warfare garbage. He is wrong, and one of his most ardent volunteers, showcased in a book by two hardcore Berniecrat organizers, proves it!