Reseda Town Hall with AG Becerra: We Got Another Runner!

For this town hall, held at Reseda High School in Reseda, the Valley section of Los Angeles, I wanted to ensure that Becerra answered all questions and everyone go to hear his answers.

For some reason, this statewide officer has no interest, no willingness to listen to constituents or answer their questions. Let's tell the truth, though, about his frequent visits to different sections of the state. Becerra is campaigning for re-election, nothing more, and he is using the California State Attorney General's office to push a destructive, regressive, anti-Trump agenda.

He has lost numerous cases while suing to stop the Trump Administration, and let's hope that we can knock him out so that he does not get re-elected in 2018.

This town hall was hosted with Assemblyman Matt Dababneh, who is trying to show himself having bipartisan credentials, so that he fight back against Republican and Democratic challenges for his seat in 2018. Susan Shelly almost won the seat in 2013 during a special election, but she lost by a razor thin 200 votes.

When I started talking with members of the audience, I found that there were a number of people who shared views similar to mine. One man commented that he had worked hard for nearly 50 years, saved his money, ensured for his retirement, and despised the state government for stealing his money and handing it out to local and county governments which refuse to budget properly.

Here is the first, extended video I had recorded at the Dababneh--Becerra town hall:

The best line from him? "Health care is not a human right."

Thank you. It's a commodity, a good,  a service.

There were some natty young people there who wanted to fight with us, but I also met other residents in the Valley area who supported Donald Trump and hated the illegal immigration, the high taxes, and the poor services offered by the state of California. Pensions, potholes, and problems galore, and the Democrats just want to give us more!

Matt Dababneh held court for a great period of time. As often happens with the Brad Sherman town halls, Dababneh spent more time touting his legislative accomplishments than listening to questions or hearing the concerns of his angry, frustrated constituents.

Finally, Becerra showed up, and then Dababneh and company launched into more presentations and awards.

I was really frustrated at that point, and I called out "Question! Ask a question."

Becerra actually received one of my own. "Will you sue colleges which refuse to protect the First Amendment?"

Unbelievable but true, he refused to speak to my concern, which is that colleges and cities connected to them refuse to defend protesters and demonstrators who want to exercise their First Amendment rights to freedom of speech and assembly.

The most egregious example of this lately occurred at UC Berkeley, when I was chased down the street, my hat, cape, and glasses were stolen, and then I was pepper-sprayed and glitter-bombed. 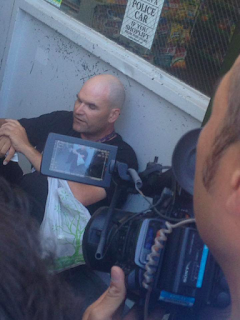 It was really bad for me, and worse for others, including a cameraman who got beat up!

Becerra wanted to shame us Trump supporters and call us rude.

The only reason I shouted out at him was that he refused to answer my question.

Other members of the audience were angry because Becerra is not working with ICE enough. Let's not forget that he wants to stop the border wall and protect young illegals rather than enforce the federal immigration laws in cooperation with Attorney General Jeff Sessions.

The outrage reached a fevered pitch when Becerra chose to run away rather than face us.

I could not believe that we had to endure this!

Of course, we refused to simply let Matt Dababneh get away with raising our taxes, reducing the penalties for knowingly infecting someone with AIDS, and turning California into a sanctuary state for illegal aliens:


Dababneh realized that he was surrounded, and that angry constituents were not going to tolerate being ignored and pushed aside as though they do not matter.

After he fled the scene, LA County for Trump celebrated yet another victory of the people against corrupt, arrogant, and undocumented politicians.

They have no good traits which I can mention! 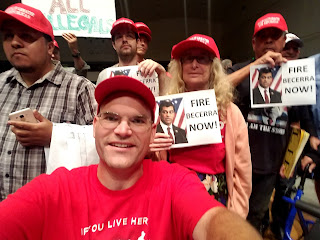 I was really impressed that there were many other like-minded people in the audience along with all of us. The anger from overburdened, exasperated California voters has reached a feverish pitch, and we are not going to put up with all of this abuse any longer.

Enough is enough. For myself, I cannot tolerate these elected officials pissing on my leg and telling me that it's raining. The state of California is in a bad state, and we California citizens want this state to remain in a strong viable state for ourselves and our future.

I was born in California, raised in this state, and I cannot think of any better place in the world to live. It's wrong, it's a total criminal for these represents, whether by district or across the state, to steal our money, abuse our rights, and destroy our quality of life.

I was really pleased that people came up to me after Becerra and Dababneh shut down their meeting to call out Becerra for ignoring illegal immigration. I have met at least two Democrats from the West Valley who voted for Donald Trump! This is incredible!

It's time that more citizens, more angry Californians started rising up and taking on the rampant evil from our state and locally elected representatives! Nothing can hold us back!
Posted by Arthur Christopher Schaper at 4:47 PM