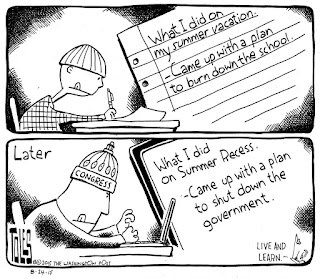 In a two-panel cartoon, Toles presents a youth in a cap writing about what he did during his summer vacation: “Came up with a plan to burn down the school.”

This caption makes no sense. Why would a student share in a classroom assignment his plans to destroy the school? Such a topic is not humorous in itself, since a  number of disturbed students have plotted similar acts of violence and carried them out.

The second panel depicts an adult wearing the Capitol Rotunda on his head. “What I did during Summer Recess: Came up with a plan to shut down government.”

Granted, political cartoons rely on comedic exaggerations for stronger effect, yet there is no comparison equate House members’ decision to shut down the federal government with burning down a school. Such a political equation is not just specious and spurious, but offensive and disturbingly unfunny.
Posted by Arthur Christopher Schaper at 12:42 PM