RedState: What Happened to Rand?

US Senator Rand Paul captivated concerned conservatives across the country when he filibustered the appointment of a new CIA Director.

He demanded an answer from the Attorney General whether President Obama could use domestic drone strikes to kill Americans.

He talked for eleven hours, stood his ground on the floor of the US Senate, and gathered national support. One conservative in Palos Verdes, CA was telling me how he sat and watched the whole thing.

What was so mesmerizing, so impressive about the junior US Senator stalling the nomination of the CIA Director?

Someone in Washington DC was disrupting the status quo. With libertarian leanings, and an interest in pushing the federal government as far away from our individual lives as possible, Rand Paul has tapped into the younger set looking for someone anti-establishment but also forward looking.

He appealed on Sunday morning talk shows for the Republican Party to adopt more libertarian stances on key issues in order to bring more states into play. This call for limited government to the greatest extent should not alarm Republicans. Ronald Reagan, while governor of California, declared that libertarianism is the heart of conservatism.

George W. Bush lost that heart, and the GOP lost its staying power for four years, until the Tea Party Movement revived the necessary limited government beat. Paul picked up that impulse, and defeated the Kentucky GOP Establishment and the weakening Democratic Party to become US Senator.

He knows how to work the cameras, and he knows how to arrange legislative deals on the floor in order to accomplish necessary reforms. He has reached out to minority communities, giving standing room only speeches at black colleges as well as CPAC.

He also filibustered reauthorizing the NSA, and talked it to death and dormancy.

Yet for all that Paul has accomplished, he is losing traction and fast, not raising enough money or getting enough media spotlight. Why?

Here is the guy who should be doing some cross-party fusion. He rallied a lot of Americans in bipartisan fashion on national security. He seemed to be playing his cards right. And . . . ? Bernie Sanders is kicking his butt in campaign fundraising. In fact, I dare say Sanders froze Paul’s chance at fusion. All the little rich libertine millennials that Paul was counting on, instead got excited for Sanders. But I am still really surprised by this.

Millenials are more anti-authoritarian than conservative.  They have no problem with Big Government, as long as it lines their pockets, providing free anything. Such is human nature. Anyone who is authentic in their eyes, whether leaning left or right, will get their attention and gain their support.

Such is the case with younger voters gravitating heavily toward Sanders, who for decades has railed against Big Everything (except government, of course). Rand Paul talks big on preserving our privacy and holding elected officials accountable to the Constitution, but the "Good Guy v. Bad Guy" narrative will trump ideological discussions every time. Such is politics.

Why else might Paul by missing money and support?

To be fair, most of Paul’s contributions are less than $200.00 a piece. That shows he has some real grassroots support. But that’s not enough. He got in Sen. Mitch McConnell (R-KY) 58%‘s bed in Kentucky and McConnell made kissy face through his re-election. The moment McConnell’s victory was secure he kicked Paul out of the bed. Paul has misplayed his hand on social issues and, for large donors, national security issues too.

On social issues, I do not agree. The US Senator pushed back against the "War on Women" fraud which DNC Chair Debbie Wasserman-Schultz tried to play. He has discussed legalizing marijuana, or at least defederalizing it, and aside from millenials (Who are fickle about voting in general, and voting Republican in particular), that issue does not resonate. His foreign policy views have immediately turned off national conservatives. When he declared Republican war hawks responsible for ISIS, Paul lost a great deal of credibility.

On  immigration, he has waffled and wandered in his rhetoric, even though he voted against the 2013 Obamacare of Immigration Reform bills, which thankfully died in the US House of Representatives. He once called illegal aliens "undocumented citizens". His outreach to black communities has left him with a black eye sometimes, in that he places blame on the state when other issues, like the state of black families, needs more attention.

Photos like these have not helped Rand Paul, either: 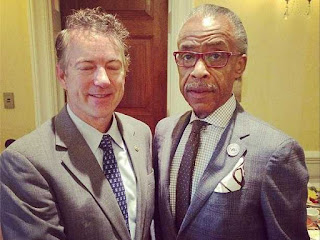 So, what has hurt Paul so much that he has appallingly limited chance of winning the GOP nomination, let alone the Presidency? Erickson offered the following reasons, in light of his genuine surprise at the "new Republican's" bad numbers:

More recently, Paul has failed to gain any traction. Two weeks ago, Sen. Rand Paul (R-KY) 87% threatened to hold the highway bill hostage over an amendment to defund Planned Parenthood. He was then nowhere to be seen in the fight led by Sen. Ted Cruz (R-TX) 100% and Sen. Mike Lee (R-UT) 100%. Cruz was all over television and radio getting major press and accolades from conservatives.

It's not enough to pick the right fights, but you have to win them, and raise a national consensus to help you win. Ted Cruz announced his candidacy before anyone else, and Rand looked like a "Me Too" Rand-Come-Lately. The lack of coordination with media as well as messengers has hurt Rand.

Despite his lack of fundraising, Paul is doing the exact opposite of other candidates. When they go to gathers of candidates, Paul avoids them. This includes the RedState Gathering where he is the only invited candidate not coming and the Koch gathering as well.

Why does not he not go out and mix with the crowds and mix it up with his fellow Republican contenders? Even when he fired off at New Jersey Governor Chris Christie, the Senator hurt himself more than he helped, and Christie landed a well-placed counter. "You make speeches on the floor of the US Senate so that you can cut videos to raise money for your campaigns."

Other Republicans have taken offense at this narcissistic trend which guilds part of Rand Paul's celebrity. Young voters like him because they think that he is like them, and the last thing this country need is a Presidential who is like us, when he has to do things everyday Americans are neither equipped nor willing to do.

Besides, on from his ideological stances on foreign policy and national security, including his inconsistent relationship with national GOP leaders, no one should be surprised that Paul has not been able to stand out in the midst of a diverse yet receding Presidential crowd.
Posted by Arthur Christopher Schaper at 10:00 AM