Art Kaskanian, and the Drawbacks of Modesty


When politicians run for office, they take great pains to monitor their messaging. They don't make bold statements for fear of upsetting prospective supporters, or promising something which they cannot deliver once elected.

To avoid making bold promises which they cannot keep, that is wise.

To neglect sharing with voters your accomplishments, that is unacceptable. There is nothing arrogant or amiss about a politician telling voters the good that he is done.

That is not arrogance, that is truth, that is revelation.

With this point in mind, I turn to Gardena City Council candidate and Gardena Planning Commission Chairman Art Kaskanian.

As a guest on my radio show "The State of the Union", I asked him about his family, background, and activities in Gardena. He mentioned repeatedly how much he loved his city, and wanted to make sure that businesses continued to invest, maintain, and thrive in the area. He also championed the public safety officers, and pledged to work with them and improve their capacities in the city.

During the radio broadcast, I also focused on Kaskanian's efforts to correct the black water problem for Gardena residents. The sludge and soot in the water has disconcerted a number of residents, and Kaskanian connected with the voters and the water company to figure out the problem and the solution, since a number of residents are finding that their water is polluted.

While I was interviewing the city council candidate, Gardena Mayor Pro Tem Tasha Cerda asked to step in and share with listeners a number of Kaskanian's accomplishments.

"Art is so modest, and he is not sharing the number of things that he has done for the city of Gardena."

As Chairman of the Planning Commission, Art not only signed off on bringing more businesses to Gardena, including In-and-Out, but his approval with fellow planning commission members brought in two hundred fifty-five more homes and a senior center. Building a home is a well-established means of strengthening ties in a community as well as increase revenues. Senior centers are an important fixture in cities, as well, particularly because of an increasing elderly population in many parts of the country.

I did not know about these developments.

Art is also a member of the Gardena Kiwanis and Gardena Elks organizations, charity groups which raise money for a number of causes. These associations matter, and Kaskanian attended a number of them as part of his campaign for city council. People need to know that he is not some businessman who preaches love for his city, yet does little for the city beyond speech. 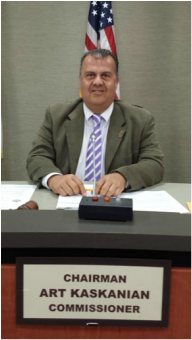 Art is also the Chairman of the Gardena Police Foundation. Everyone loves the police when they protect the streets and make the city safe. No one will invest let alone live in a city where crime is rampant, and criminals reign supreme. Gardena Mayor Paul Tanaka, the retired undersheriff for the LA County sheriff's department, pledged to his residents and all LA County residents his priority of providing a safe community for all residents, that they could go out for a walk at night and not worry about being victimized.

Kaskanian affirmed the sense of security in Gardena, but during our interview he neglected to share with me that through his leadership on the Gardena Police Foundation he helped raise one million dollars for new equipment, resources, and training for the police. Moreover, he personally purchased three-wheel segues for the department.

Voters deserve to know about a politician's accomplishments for the city. There is nothing arrogant or unseemly about promoting one's accomplishments in order to get hired. His other donations include to the Gardena Fire Department and Toys for Tots, as well as the Gardena Jazz Festival, and all of these donations came about before Kaskanian declared his candidacy.

There are drawbacks to modesty, because voters in Gardena, and radio hosts like me, want to have the most information on all candidates, including the good things that they have accomplished, which merit their election to higher office.
Posted by Arthur Christopher Schaper at 11:41 AM