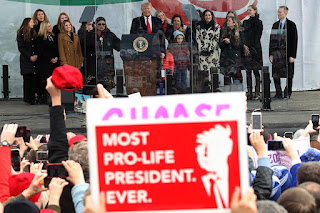 Ronald Reagan once said, “The values and freedoms we cherish as Americans rest on our fundamental commitment to the sanctity of human life.”

Recognizing this, and celebrating the recent decision to overturn Roe v. Wade, I have declared June to be Sanctity of Life Month! pic.twitter.com/iFer9Ml1XO

God bless him for doing this.

However, he is thanking and quoting the wrong person.

But it was President Trump who successful fulfilled the promise of the Republican Party to end Roe v. Wade.

Trump is the first president to speak at the March for Life rally in Washington DC.

Trump fought and pushed through three pro-life Supreme Court Justices, all of whom navigated the precarious questioning regarding legal precedent, natural law, and the constitutional authorities of the United States Supreme Court.

Trump deserves major respect and recognition for this massive achievement, and Republicans across the country better start respecting him for that!

This pro-life movement's victory does not belong to Ronald Reagan: it belongs to President Trump! 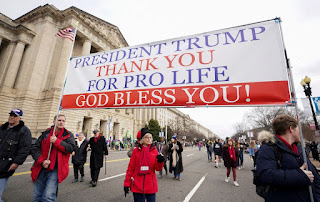 Posted by Arthur Christopher Schaper at 11:01 AM