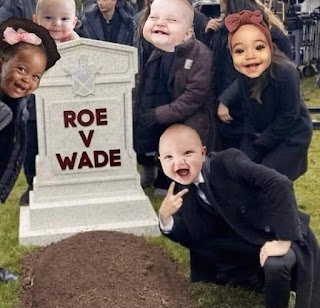 Well, this is good news:

Roe v. Wade is fading from the news cycle with no political effect, the 1/6 hearings have been disgracefully discredited, Joe Biden’s approval rating is approaching the 20s, and WE ARE WINNING. pic.twitter.com/4ZPs0JgnBc

The overturning of Roe v. Wade is not going to wipe out the GOP ticket this year.

People are so angry about the blunt, in-your-face bread-and-butter issues crushing their wallets right now. People are fed up with the rising crime, the open borders, the government overreach tied to COVID-19.

AND, there is a growing consensus in this country that accepts limits on abortion. Dobbs v. Jackson does not criminalize abortion across the fifty states. The ruling does restore the power of the several states to restrict abortion as they see fit.

And many states (and more importantly, their voters) have seen fit to abolish the horrific practice.

Good for them, I say!

For decades, conservative pundits and prognosticators worried that if the Supreme Court finally removed Roe, the outcome would galvanize Democrats like never before to push all kinds of radical laws throughout the country. Worse yet, in whatever year that Roe went down, Democrats would swarm local and state elections, giving consummate power to Democratic party bosses.

And yet, it looks as though that is not going to happen. In fact, the general ballot shows the GOP turnout increasing! Recall that in 2010, Democrats enjoyed a +3 generic ballot advantage, and they lost a net 60 house seats.

If the general ballot now has Republicans polling ahead, and at +5 (or even +10), that means we are looking at a massive GOP global flood!

And the repeal of Roe v. Wade is assisting this effort.

Lesson to the GOP Establishment: fulfill your promises, do your job, and you can win.

Trump capitalized on this basic idea, and he won a lot of victories while seated in the White House, and he is still winning today.

Posted by Arthur Christopher Schaper at 7:28 AM