I just exposed Abner Hauge, an obese Antifa soyboy who routinely harasses conservatives and everyday commonsense citizens who want to take back Los Angeles streets from hate groups like Antifa and perverse like Drag Queen Story Hour and LGBT militants.

And there's another antifa soyboy (or soygirl? or soy-whatever?) named Vishal Singh: 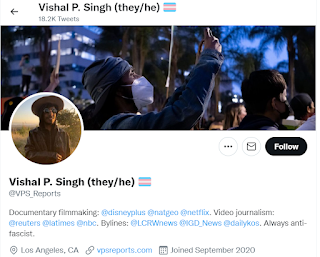 Yes, he actually has preferred pronouns, and they are "They/He." What is this?

At any rate, like other Antifa Soyboys and Karens, Vishal is obsessed with me, too:

Of course, what's really disturbing is, like other hate groups operating in Los Angeles County, he relies on yet another discredited hate group, the Southern Poverty Law Center, which has a long history of deaming Jews, Muslims, Christian, immigrants, and making every effort to deprive African-Americans of educational opportunities. If anything reeks of white supremacy, look no further than the SPLC ... and I guess Vishal is part of that mix, too.

Of course, unlike a number of other Antifa soyboy and confused transgender perverts, Singh has gotten some much-needed pushback for his hate:

And here he is, playing victim once again:

It's been a year since the far-right hospitalized me for reporting. A year of harassment campaigns vilifying me for receiving a concussion, broken nose, and broken eye sockets. I was even falsely arrested (charges rejected), yet the attacker remains free. https://t.co/N1nFJRro1r

These Antifa bigots don't seem to understand that there are consequences when they resolutely endanger women and children with doxxing and public exposure.

If anyone doubts that Vishal doesn't work with Antifa, check out this report from an Indian newspaper, confirming his connection with the domestic terrorist hate group.

There are some men who cannot stand by and allowing perverted, confused, mentally ill militants like Vishal to get away with such depravity.

Confused sick people like Vishal need help, not enabling, and they certainly have no right to lie, scheme, defame, and harm people who do not look like them.

Posted by Arthur Christopher Schaper at 11:29 AM