Tear Down This Icon: Replace Reagan with Trump 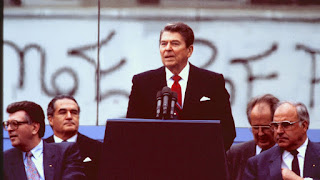 In 2013, after Republicans lost their winnable race against Barack Obama to deny him a second term, Washington Post columnist Jennifer Rubin sounded off with a daring opinion piece:

Tear Down This Icon

Normally, I would not give a fake conservative, closet NeverTrump liberal the time of day. But her article arguing for removing Ronald Reagan as a rallying point for the Republican Party resonated with me in the past.

Reagan was a big spender, even in Washington. He had liberal positions during his governorship. He supported amnesty for illegal aliens, and he even pressed for an open border of commerce, trade, etc. with Mexico. Many national-populist types are turning on Reagan for precisely these issues, and even his major columnist supporter George Will would denounce the clash between Reagan's rhetoric and the reality of his administration nearly thirty years after he was elected.

The unfailing reverence on the American right for Ronald Reagan is understandable. He was the only exemplar of modern conservatism to win the White House, and unlike liberal icons such as Roosevelt or Johnson or Obama, he presided over an economic boom and became beloved by voters not normally drawn to his party. No wonder that Reagan, long before his death in 2004, attained mythical status in the conservative movement and the Republican Party.

Nearly ten years after this statement, this mystical hold of Reaganism still grips the Republican Party, especially the National Federation of Republican Assemblies.

We should give some credit where it is due, anyway. Reagan presided over eight years of unprecedented economic growth. His foreign policy hearkened back to a more isolationist approach, in which he spoke softly but carried a big stick. His aggressive efforts to sanction and stop communism, especially the Soviet Union, are admirable. The USSR collapsed in large part because of Reagan's indefatigable commitment to consign communism to the ashheap of history.

But that myth has become a burden for the modern GOP. It has bound Reagan’s followers on the right to policies and positions that were time-specific. The old guard has become convinced that Reagan’s solutions to the problems of his time were the essence of conservatism — not simply conservative ideas appropriate for that era.

This is an accurate and effective criticism. The issues which Reagan faced in 1980 and 1984--inflation, recession, communism around the globe--were not the major issues of Election 2012. In fact, they are not the main issues today. As I mentioned above, Reagan's policies counter the goals and interests of conservatives today!

We want to secure the border, limit immigration (not just stop illegal immigration.) We want to expand gun ownership and assure gun rights, not deprive them. Also, China is a looming global (and globalist) threat which cannot be tamed with free trade.

Reagan's solutions and successes will not help the GOP today.

And with that, Rubin gave a stern warning to the Twenty-first Century GOP:

The Republican Party can remain a Ronald Reagan historical society, or it can try to endure as a force in national politics. But it can’t do both. The choice matters greatly, for there is no guarantee that the GOP will retain its ability to win national elections or that conservatism has a future as a national governing philosophy.

I could not agree more with this sentiment. It seems to me that Republicans want to live in the past. They do not want to move with the times, i.e. get fighting new fights. There is this hope that they can coast on prior victories.

However, I do not agree with Rubin that the party needs to move left on key cultural or economic issues. The last thing that the United States, or any country for that matter, needs is two liberal, progressive, leftist, communist parties, etc.

In her article tearing down Icon Reagan, she does not despise traditional values. She does make a great deal of noise about outreach to other demographics in the country, and even the RNC Chairman at the time, Reince Priebus, acknowledged that

The Family Research Council rejects Rubin's suggestion, but focused on his campaign process to win as many states as possible throughout the country:

In a play on one of the Gipper’s greatest lines, the Washington Post’s Jennifer Rubin urges us to “Tear Down this Icon.” The highly touted “From the Right” columnist urges conservatives and Republicans to get over the Reagan legacy.

By the recent showings of the party’s presidential nominees, one would think the GOP has certainly gotten over Ronald Reagan. When was the last time the Beltway campaign consultants, those high-priced hirelings, even attempted to win the whole country? Besotted by Red State/Blue State calculations, and armed with their white boards, the big domes never have come close to Reagan’s generous inclusiveness. Reagan thought of all the states as Red, White & Blue. He wanted to win them all, and twice nearly did.

Family Research Council writers are correct, in that the Republican Party has eschewed fighting for the entire country, and instead got comfortable with barely getting by. That never works in politics for the long term. California Republicans have followed that model since 2002, and now California is a deep-blue whole of progressive despair. Controlled opposition does not win the fight.

Rubin's point still deserves attention, i.e. the Republican Party needs to get beyond celebrating Reagan's old victories. There are new culture war issues that need to be fought, and just basking in the shadows of Reagan's past is not going to help the party--or the country--today.

So, I do agree with the general sentiment: time to move on from Reagan. I have written about this issue a number of times.

I submit that it's time to recognize President Trump as the new standard-bearer for the Republican Party. He accomplished a number of domestic policy goals which matter today. He fought to build the wall along our Southern border, not just talk about it. He focused on illegal immigration and mass immigration, which was decimating border communities and harming working people.

He is the most pro-life President we have ever had in the White House. He was the first President to address the March for Life in Washington DC. He repeatedly took efforts to cut funding to Planned Parenthood and other abortuary hate groups and institutions.

He focused on protecting and enhancing religious liberty in a nation where respect for the divine has been unduly tarnished and neglected.

He kept the United States out of war for four years.

He fought against the encroachment of domestic communism, including Critical Racist Theorty and Woke ideologies. Reagan fought international communism, and that deserves merit and support. But we need to fight this corrupt, corrosive, evil ideology at home now, and we need a real culture war commitment to fighting and winning this fight.

Republicans have wanted to bask in the glowing of Reagan's old victories. President Trump's victories then and now deserve our new--and renewed--focus.

Most importantly, though, Trump should be the new standard-bearer because He Fights. He was a relentless pugilist in the fight to put America and Americans First. That spirit of trudging through tough times, of putting up one's dukes to fight and win, we need that kind of animus in conservative politics. We don't need controlled opposition, we don't need politicians who play by Queensbury Rules, while the Left routinely breaks the law and does whatever they want.

Reagan had his place, but it's time to move on. We need a new standard, a new pattern, a new example of conservatism that fights to win, that struggles to shape the culture, that moves forward to ensure and foster a movement.

It's time to tear down Reagan and replace him with Trump.