NAS Daily is a globalist chill.
He pushes climate alarmism. He wants everyone to stop eating meat.
He talks about other woke priorities, like privileges for woman and other secular programs and proposals.
Finally, he was confronted for his double-dealing hypocrisy by Avi Yemini of Rebel News:
Here's Avi's video:
And here's Nas Daily trying to spin himself into the victim:
There is something really satisfying about seeing these liberal social media influencers get their comeuppance live and in person. Who goes to DAVOS and dares claim that nothing costs anyone?
Why is that Nas Daily is determined to push everyone away from eating meat or traveling in their cars? One has to wonder how he justifies his production costs based on views alone, too.
I doubt that his ability as a media influencer is the sole and sufficient source of income for his globalist-pushing empire.
The best part about Avi Yemini calling out Nas' hypocrisy, though, is that Nas' attempt to spin himself into the victim backfired bigly.
Check out all the comments underneath his own "spin" video on YouTube (the top comments):
I was really impressed to see that most of the YouTube viewers were wise to the game. I have really hope for the future of this country, and the world, when everyday viewers can see the crap and call out the propaganda.
God bless Rebel News! Avi Yemini and his team did an excellent job confronting Nas and exposing his hypocrisy. 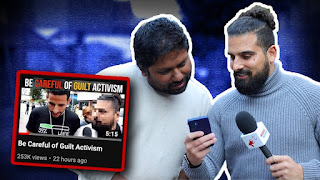 Instead of asking about his carbon footprint, people need to ask Nas Daily about his Bull-sh*t footprint, because we all know it's immense!
Posted by Arthur Christopher Schaper at 11:56 AM