Gays Against Groomers: Too Little, Too Late, Not Good Enough 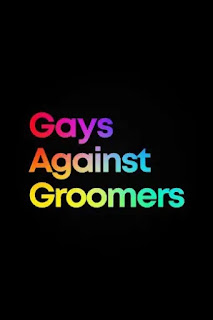 The homosexual and transvestite lobby has been pushing lies upon lies on the general public for decades:

2. "We are just consenting adults who want to love one another."

3. "What we want is just to be respected and left alone."

4. "We promise that we won't go after your freedom of speech or religion."

5. "There is nothing wrong with homosexuality or transgenderism."

All of these promises and statements have turned out to be big fat lies. They were lies in the beginning, and yet for the last thirty years, the public has been jammed and programmed to believe the lies.

But now there is a new group out there, a bunch of homosexuals, who are dedicated to stopping the grooming of children at all costs ... supposedly.

The group is called "Gays Against Groomers", and they are supposedly taking on the LGBT activists around the world that are targeting children with homosexuality and transgenderism:

Stop using our community to shield groomers and pedophiles. We never consented for you to bastardize our name with your sick ideology and behavior.

Signed,
Every rational gay in the world, of which there are many more than you

The admission from one lesbian activist is somewhat telling:

This is the heartbreaking reality of what the woke activists have done to our community with their push to sexualize & indoctrinate children. So many of us feel this way. Had we known this is what our fight for equality would have led to, we wouldn’t have fought for it at all 💔 pic.twitter.com/TRm1CbKlH3

This lesbian shares the following admission (of sorts):

"So here it is, the most unpopular opinion I will ever do. If I would have understood  when I was younger that fighting for my rights as a lesbian would mean allowing children to drag shows, attaching child molesters to our community, and allowing children to change their sex ebfore they know what their favorite color, I would have never done it."

My first response? Too little remorse, too late.

The LGBT movement at its core was interested in normalizing indoctrination, grooming, and pedophilia. Don't believe me? Check out this quick crash course in Queer Theory history:

The ambiguous, all-encompassing "Q" is a gateway for pedophiIia acceptance. Unintentionally by most, but intentionally by the founders of the ideology. pic.twitter.com/zvLnJ2odUc

What's more, a liberal author/reporter/propagandist acknowledged in his latest book detailing the rise of the Right in 1970s America that the advancement of "gay rights" went hand-in-hand with repealing age of consent laws:

In 1972, the Democrats' gay caucus won the right to hold a convention floor vote on a gay rights plank in the party platform. (The plank failed in part because at an earlier meeting the caucus had voted 32-24 in to endorse abolition of "all laws governing the age of sexual consent.") (Reaganland, pg 84, 2020)

Pastor Scott Lively has also written extensively about how the push to normalize homosexuality went hand-in-hand with the drive to normalize sexual predation and exploitation of children.

I must also remind everyone of the fantastic undercover work that Ryan Sorba did for Project Veritas, exposing the truth beliefs of homosexuals, including a large cohort at a San Diego gay bar:

Child abuse has been central to the entrenchment and proliferation of homosexuality and transgenderism. It originates from abuse, and tto normalize these terrible behaviors is to normalize sexual abuse.
Out lesbians and active homosexuals who spent so much of their time normalizing their destructive lifestyles and pushing for acceptance now should have realized that they needed to deal with the earlier trauma in their lives which caused their unhealthy desires and distorted self-perception.
Because the body politick and the collective culture refused to take a stand for truth and against the normalization of these destructive behaviors, it is inevitable that the people suffering from these painful traumas, who in turn sought solace and acceptance in demanding government support and subsidy, would in turn unleash onto the world terrible targeting of our nation's younger generations.
In many ways, I have no sympathy with the above woman's coming to her senses. A lot of homosexuals are trying to maintain the imposed, inauthentic normalcy of their conduct, and at the same time they are trying to prop up the lie that they were "born that way." But at the same time, they want to back away from their extreme activism of the 1990s and 2000s, hoping that they can restore their standing in the general public by "proving" that they do not want children to be harmed.
They need to come to grips with the fact that they were harmed themselves. If they really want to go after the groomers, they need to start confronting the groomers who groomed them to become homosexual and transgender.
They need to confront a much deeper, more painful reality: that the identities that they have constructed for themselves, which in turn they have foisted on others, is a lie, and that their true identities will be found in resting in the natural order and truth of their bodies and minds.
If they really want to stop the groomers, then the gays need to give up the gay, as well. The truth is, the reason they are gay is that they were groomed, harmed, abused, neglected, molested, or enabled into these destructive behaviors and false ideas. In a sense, yes, they are victims and there needs to be that one degree of compassion. At the same time, the fact that hurt people hurt people is not an excuse.
The "Gays Against Groomers" push is too little, too late, not good enough.
If they want to redeem their past activism and make good on all the bad that has taken place, they need to apologize for trying to normalize their own behaviors. They need to seek proper help to deal with the deeper issues that caused them harm, and then knock the hell out of the lies of the LGBT agenda as a whole!
"Gays Against Groomers" should become "Ex-Gays Against Groomers" if they want to be serious about stopping this culture contagion for good.
Posted by Arthur Christopher Schaper at 7:33 PM