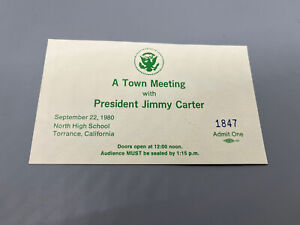 Jimmy Carter was never a high school basketball star. He is not tall, and even as a boy his taste in running was for the space and solitude of the distance events, not for jostling with nine other kids up and down a 74-foot strip of hardwood floor.

But now that he is a man and the president, Carter has become at home in the high school gymnasiums of America. Already in the fall campaign he has visited the gyms at Truman High School in Independence, Mo., Moody High School in Corpus Christi., Tex., and North High School in Torrance, Calif.

And today, which happened to be his 56th birthday. He was in the gym at Northern Community High School here, home of the Vikings, where he was as comfortable and at ease as any member of the girl's basketball team, winners of 56 straight, state champions the last two years.

The president was holding another of his "town meetings" and, as usual, it was an event.

The walls of the building were plastered with signs welcoming him, praising him, wishing him happy birthday. At one end of the gym, the school band sat cramped in a section of retractable wooden bleachers, poised to play "Hail to the Chief." There would be no basketball game here this afternoon, for the gym floor was covered with folding chairs where the respectful citizens of Flint would sit and listen to the president.

This was Carter's 22nd "town meeting" as president, and the fourth he has held during the one month of the general election campaign against Republican Ronald Reagan. The president told the cheering crowd that it was no accident he decided to come today to Flint, where he ended his 1976 campaign.

It is also no accident that the "town meeting" -- a format in which the president makes opening and closing statements and in between answers about a dozen questions from randomly selected citizens -- has become the centerplace, the main event, of the Carter campaign on the road.

The president is running as tightly a controlled campaign, and is at least as shielded from questions from the traveling press, as is Reagan. But it is part of Carter strategy to portray Reagan as a man out of his intellectual depth when it comes to national issues and to accuse the GOP nominee, as Carter did in a speech Tuesday night, of being "muzzled" by a staff that does his thinking for him.

The "town meeting" is the device the White House has hit up to contrast the "open" president with his "muzzled" opponent. Carter has used the device since the beginning of his presidency. He is more comfortable with it than with news conferences, and he is extremely skillful in exploiting the format.

Like other presidents before him, Carter has also said he gets better questions from ordinary citizens at these sessions than he does from Washington reporters. That, occasionally, is the case, but it is also true the questions posed at a "town meeting" can be as silly and shallow as any asked during a White House news conference.

The first questioner, who began her inquiry about Cuban refugees in Spanish, gave the president a chance to show off his knowledge of Spanish, which won applause.

And elderly woman said she was concerned about the future of senior citizens, to which the president replied, "A lot of the future life for senior citizens will depend on the decisions that will be made in the ballot boxes of voting places on Nov. 4." He then launched into a discourse on his devotion to the Social Security System and other issues of particular concern to the elderly.

A man complained that Flint had not received due recognition as an automobile manufacturing center. Carter quickly agreed, expressed sympathy for the city's economic woes, and concluded by saying: " i was invited to meet here to have a man-to-man debate with Gov. Reagan. I'm here -- and anytime he's willing to meet me back here on a two-man debate proposition, I'll make my sixth visit to Flint, Mich."

Almost nothing fazes the president at a "town meeting" not even the two questions posed today about the economy of Flint, where last summer the unemployment rate hit almost 26 percent and where more than 22,000 people are still out of work, according to the Detroit Free Press.

Nor was Carter rattled by the truck driver who challenged administration policy on a complex issue involving umemployment benefits for workers in industries, such as trucking, that are indirectly affected by foreign imports. There was no suggestion of a change in policy from the president. Instead, he asked the man for his name and address so he could "go back and talk to the secretary of labor and give you a call."

The crowd loved it. They loved it when Marlene Laro, 9, asked Carter to explain "the difference between the Republicans and you so I can tell my parents how to vote." And they loved it when Carter, after his long answer to Marlene that he was more than happy to provide, shed his suit coat, a regular part of the theater at these events.

At the end, the crowd in the gym stood and sang "happy Birthday" to the president. With a broad grin, Carter thanked them and then he was gone. He is off Thursday to Dayton, Ohio, for another "town meeting."