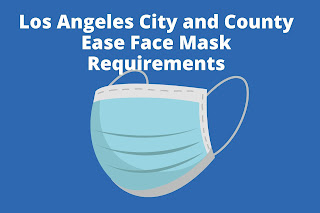 The Los Angeles County Board of Supervisors was going to reinstate the indoor mask mandate throughout the county. They have the supposed authority to do this only because Gov. Hairgel (Gavin Newsom) insists on prolonging the statewide state of emergency. It is an absolute travesty, a disregar for the rule of law in its entirety.

There is no state of emergency. There is a state of political posturing and tyranny, certainly.

Of course, Californians are getting bigger, better, stronger at defying these outrageous mandates. We are not going to comply with this nonsense!

I wrote a nasty letter to the LA County Board of Supervisors, making it crystal clear that LA County residents are not going to go along with yet another mask mandate. Businesses throughout the county signalled their refusal to comply. But best of all, actual city governments took a firm stance against this abusive power trip. Long Beach and Pasadena have their own health departments, so they can do whatever they want, anyway, and they made it clear that they were not going to reinstate any mandates.

Then Beverly Hills declared in a special session earlier this week that they would not enforce any indoor mandate. Reminder: Beverly Hills is not exactly a conservative stronghold, and yet the entire city council went on record opposing enforcement of any further mandates.

Even my home city of Torrance has initiated an agenda item to reject any future mandates from the County of Los Angeles AND issue a Resolution of No Confidence in LA County Health Director Barbara Ferrer.

Then, on Thursday, July 28th, the County declared that they would not reinstate the mask mandate!

No county in California currently has an indoor mask mandate.

The County is not being honest with the public, when they claim that they are backing away from a reinstated mandate because of increased COVID-19 hospitalizations. They claimed that the numbers were climbing, and the chances of another COVID-19 spread were so great, that they would have to reinstate a mandate.

Imagine what would have happened if all the cities had pushed back two years ago?

Posted by Arthur Christopher Schaper at 11:37 AM