In Los Angeles County, the Antifa hate groups are losing power and legitimacy.

There is one of many Antifa soyboys, frauds, losers, and

One of the most desperate is Kelly Stuart of El Segundo, aka Karen Stuart, aka Antifa Karen:

She loves stalking innocent people, whether in El Segundo, where she lives, or in Torrance, or even in Santa Monica.

Check out her latest deranged rant right here, when I was attending the Patriot Pride parade in Santa Monica:

She was clearly not having a good day that day: 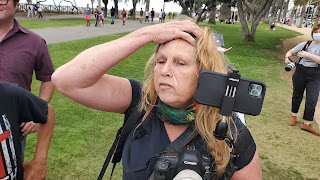 Is anyone really surprised, however?
She harasses women and children repeatedly, and she has declared war on fathers. Her hatred of Asian-Americans like Tony Moon, aka Roof Korean shows what an unrestrained bigot she is.
But the worst part is that she is obsessed with children's sexuality. That makes her a pervert, a predator, and a groomer.
She is all in on LGBT perversion and indoctrination in the public schools. Anyone who promotes such garbage in the classroom or in the public square--and especially on children--is a pervert, a predator, and a groomer.
And it only gets creepier.
She told me that she was going to follow me around everywhere. Wow! She really has issues.
For some reason, she had a hard time keeping her focus ... 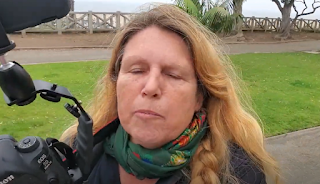 Perhaps she was hoping she could click her ruby slippers (or her mud-caked boots) and repeat: "There's no place like home."
She then announced to the crowd people in Santa Monica that she had millions of pictures of me. She is obsessed with me when she is not obsessed with children and harming them.
Of course, she did everything she could to rouse a crowd up against me, and it failed:
I was really impressed with how mature the rest of the people in the park were. They were calm and cool and collected, while Karen Stuart was so busy screaming about getting doxxed, when most people I am pretty sure would not want to be around her for more than five seconds.
She loves screaming about pedophilia, too, because she supports pushing such shameful themes into the public sphere. Anyone who thinks that it is OK to push LGBT anything in the classroom is in league and enabling the abuse of children, and there is no other way to put it.
Then she started ranting about how she has two kids. I feel sorry for those children. Karen Stuart should not be around children--or adults, or polite society in general.
And why?
Kelly Stuart is OK with students being abused by perverted teachers in the classroom. Of course, because she cannot deny this, she insists on projecting onto everyone else that they are predators, perverts, pedophiles, etc. Antifa is a hate group that targets kids, that wants to pollute children's minds and harm their bodies. And that pretty much sums up Kelly "Karen" Stuart.
She is a menace to children and adults alike, and thankfully more patriots are standing up to her disgusting, vile, grooming hatred.
In fact, I am happy to share that more people have shared my efforts to expose Antifa Groomers like Kelly Stuart, or should I write "Aunt Tifa":

@theromandrake9 Arthur doesn’t have time for AUNT TIFA doxers who post pictures on the internet of Trump supporters. About20 of them came all to take our pictures in Santa Monica this weekend. #makeamericagreatagain #truml2024 ♬ original sound - Roman Drake

Oh, and it gets better.

Apparently, my effective confrontation with this and other Antifa Groomers went viral elsewhere: 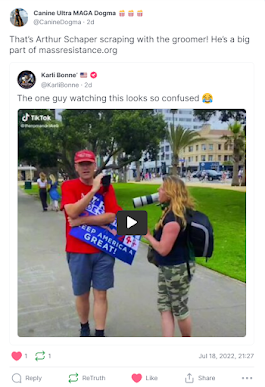 The way to stand up to perverse hate like Antifa Groomers is to:

2. Tell the truth about them

What really disturbs me is that this creepy old lady was determined to follow me around. Did she really think that she was going to make a difference letting people find out what a pervert she is? 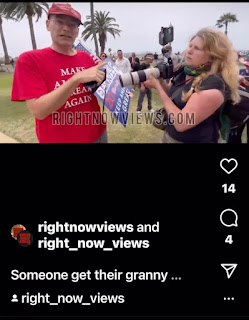 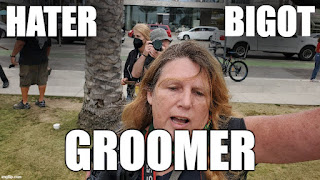 Posted by Arthur Christopher Schaper at 11:12 AM