Rest After the Recall 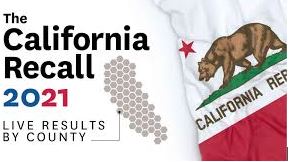 Gavin Newsom won.
The recall lost.
I lost, too.
Or, did I lose, really? In the end, this is a loss for the other voters in the state of California. This is not a loss for me in the long run. There is so much injustice in the state of California, and yet for all of it, none of it has held me back.
In the long run, I feel that this is a win. I can finally let go, stop trying, stop striving to save this state that does not want to be saved.
I must say, I had a sinking feeling, based on all the continuing polls, that the recall would fail.
There was a smaller sense of sorrow yesterday, when the recall failed. I was not devastated, and I was prepared for this worst outcome.
A day later, it is crystal clear to me who the problem really is: it's the voters themselves.
The vast majority of voters in the state of California, Democrat and Republican, are the problem.
Democrats are voting for their progressive delusional cult. Republicans did not turn out to vote for the recall. Yes, there was voter fraud, no doubt about it, and it would be good to see what those results would be in a comprehensive audit.
Still, for all the pretenses, the fact is that a new religion has clearly overtaken the state of California: The Cult of the Woke.
And they are as asleep as ever. It's pretty sad, very distressing to see how far the Golden State has fallen. But the worshipped the Gold, and not the God who made the temple.
For years, I have been fighting the cultural scourge that was so common, so prevalent in this state. For the last ten years, I have been working, volunteering, active in GOP circles to fight back against the moral rot that has overtaken this state.
And it has really come to naught. Yes, I have witnessed victories here and there at the local level, and for two years, a Republican did represent me in the state assembly. But that joy was short-lived, and even then, that Republican failed in all too many cases, even voting to allow illegal aliens to purchase health insurance in the Covered California Obamacare health exchanges.
What a shameful crock.
The state GOP and the county GOP have been worse than complete failures. They have been complicit in the liberal corruption which has overrun the state. Many of them were Democrats at one time, and they ran for the GOP seats because the Democrats are too full.
The people of the state of California hate God, they hate the truth, and they are holding to their Jim Jones-like hold onto Democratic policies, and they must reject Republicans in particular and republicanism in general. There is no talking to people in bondage to a cult.
I don't feel bad about accepting the sad reality of all of this, and I do not feel bad about giving up at this point. California voters are rejecting what I believe. They are not rejecting me. They are rejecting God, they are rejecting Christ Jesus, and they are rejecting His grace.
I am giving up because they are not worth the effort. It's their fault, not mine. I have nothing to lose. I did my part. I have done my part. They didn't choose the candidates I support, and it's their fault. Not mine. There is nothing wrong with what I believe. It's their problem.
It's not me, it's you, California. It's not loss for me. I am not going to waste my time anymore. You are not worth the effort.
"7And the LORD said unto Samuel, Hearken unto the voice of the people in all that they say unto thee: for they have not rejected thee, but they have rejected me, that I should not reign over them." (1 Samuel 8:7)
It's your loss, California, not mine! I tried to warn you that going down the path of the same statist, status quo was going to hurt you, but you chose not to listen:
"19Nevertheless the people refused to obey the voice of Samuel; and they said, Nay; but we will have a king over us; 20That we also may be like all the nations; and that our king may judge us, and go out before us, and fight our battles." (1 Samuel 8:18-19)
Of course, the first king that God selected for the Israelites was Saul, and he was a failure. David would follow, and he was one of the greatest kings, and yet even he failed.
The Israelites would continue their descent into idol worship and debauchery.
Then came the vision which the prophet Isaiah received, in which he asked how long he would have to prophesy to the people, and they would not listen.
God gave a stern, dour answer:

"11Then said I, Lord, how long? And he answered, Until the cities be wasted without inhabitant, and the houses without man, and the land be utterly desolate,

"12And the LORD have removed men far away, and there be a great forsaking in the midst of the land.

13But yet in it shall be a tenth, and it shall return, and shall be eaten: as a teil tree, and as an oak, whose substance is in them, when they cast their leaves: so the holy seed shall be the substance thereof." (Isaiah 6:11-13)

That's where California is. I have warned Californians, and many others have done the same. But the vast majority of the voters in the state of California today do not want to listen. They have not suffered enough. They are fat, proud, thick in their minds and their hearts.

Sadly, they will suffer greatly for these failures. But it's on them. It's not my fault. It's not my problem, and I am not going to worry about it anymore.

California, I am going to rest. I worked as much as I could, and you choose to lose. It's on you at this point.

Because I now choose to rest, God can now work. Our frustrating efforts to make things right only frustrate God's working in us, for He is willing in us both to will and to do for His good pleasure (Philippians 2:13). God has not given up on the world yet. His Son has not returned yet with a rod of iron to rule the nations.

It's time for me to trust Him to make things work for good. There is indeed a real rest for me. Lord, You've got this! I am going to let you take over. Jesus, You are at work and you are making all things work together for good. (Romans 8:28).

I am giving up, so that God can take over fully.