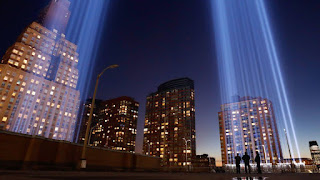 I spent last week like many of you watching and hearing stories about what happened 20 years ago on 9/11.

The first thing that made an impression on me was a street interview asking college-aged young people what they knew about 9/11. I was shocked and saddened to see how little they seemed to know, but even worse how little they seemed to care. It was not something they experienced first-hand so it joined the ranks of those things labeled as “history” which so often seem far-removed in importance in the minds and lives of young people. I understand that if I was just stopped on the street for an interview I may not come across as very articulate or knowledgeable either, so I need to give them some slack for that, but I was disappointed in their detached demeanor and apparent lack of interest on the subject.

Now contrast this to a piece I saw covering the bravery and heroism in the lives of the 13 young servicemen and women who lost their lives in the blast in Afghanistan. These young people were about the same age as the students interviewed. These were stories of self-sacrifice and courage of young people who were in the middle of doing their duty and thinking of others up until their last moments on earth. What made them care that much? What made them believe in something worth fighting for and giving their lives for? What made the difference in these two groups of young people?

For months now I have been posting about education and how important are the messages we communicate to the impressionable and precious young minds that are placed in our care. Why is it so important for them to not only remember something they may not have been alive for like 9/11, but to also learn to feel the significance of these events as well? One of the reasons is because if we fail to teach the next generation these things then not only will the memory of what happened be lost, but all the lessons we learned from that event will also be gone forever.

David and I visited New York City not too long after the towers were hit. I remember the cab driver telling us that there was a sense of love and unity throughout the city that he had never experienced before. There was a humility and kindness that brought everyone together.

I heard an interview by a person last week describing the brave first responders helping to carry people out of the burning building say, “Believe me those people being carried out wouldn’t’ have given a fig what pronouns that person who was carrying them out used or what political party they belonged to.” That statement really hit me.

There are so many things causing division between us right now. I pray it won’t take a tragedy to get us in touch with the things that really matter to all of us – the things that unite us rather than divide us. I also saw interviews of some people who decided to go into search and rescue and law enforcement after they witnessed the bravery of so many in their willingness to run into the burning building when everyone else was running out.

I want my grandchildren to glimpse some of that unity we felt after 9/11. I want them to know that not only are there people so full of hate they will give their lives to hurt others, but there are also people who are so full of love that they will give their lives to save others. I want their education to inform them of those things that bind us all together rather than trying to split us apart.

This kind of education cannot occur if we choose to keep them focused on victimization and division. That is why I have written so consistently and passionately against the ideologies I see being pushed in our schools that seek to separate us and instill in our children the lens of fear and division rather than unity and love.

Since 9/11 there have been factions pushing the message sown in the Sixties that American is evil and that America deserved to be attacked. Are we a perfect nation? Of course not. But if our young people are not given a glimpse of all the good and wonderful things that inform who we are and are striving to be then they will not see anything in it worth holding onto or preserving. They need to study and learn about the Constitution and how inspired of a document it truly is.

In that street interview several students said that they didn’t think it was a good idea to spread the idea of American exceptionalism. They said it isn’t good for us to think we are better than other nations. I don’t know about you, but I never thought that was the definition of American exceptionalism. Our young people need to know the reason that America is exceptional is because it is founded on exceptional principles inspired by God and predicated on righteous ideals dedicated to liberty and justice for all. These are principles that can be shared no matter what faith we believe in or not. If our young people don’t understand or remember this, then they will not think America is worth defending and what will happen then?

One of the powerful messages of the Book of Mormon is the admonition to remember. We learn so vividly in its pages what happens when we forget our reliance and dependence on God. The pride cycle is one of the great warnings of this sacred text. It is repeated over and over in so much of this record that we cannot escape that its message is for us. When the people were successful, they became prideful and forgot God. This pride led to them to being attacked by their enemies. With the attacks they became fearful and humbled and looked once again to God for their strength and thus they prospered again. After they prospered, they became prideful again and forgot God and the cycle continued. Here’s a poem I came across that relates to this cycle as well.

I would just add that “strong men and women” are strong because they know their strength comes from God.

Alexis de Toquerville is credited with saying that “America is great because she is good and if she ever ceases to be good, she will cease to be great.”

We are not perfect, but that doesn’t mean we can’t keep trying to be good. And by good I don’t think it means that we all have to believe in the same things nor in the same way. The founding fathers certainly understood that.

I think that’s something worth remembering.

I was about to send this when I saw an article in the Wall Street Journal this morning by Peggy Noonan who also reflects on what she has seen happen in the past 20 years since that fateful day. Here is an excerpt from her observations on what has changed.

“...We cannot help compare the America now with that of 20 years ago, and we see a deterioration. We feel disturbance at this because we don’t know if we can get our way back.The losing of the thread feels bigger than ideology, bigger certainly than par­ties. It feels like some more fundamental confusion, an inability to play the role of who we are, and to be comfortable in who we are.

The country we are experiencing now is one of people in different groups ganging up on each other. We all see this. It’s all division, driven by identity politics, race, gender, class. Twenty years ago we were grateful for cops, now we denigrate them and they leave and we argue about why they left. A rising generation of voters who were children when 9/11 happened and who became conscious of history during the 2008 economic crisis see (and have been well taught!) the imperfections, mistakes and sins of their own country but have no human memory of the abuses of other systems, of how damaging deep social­ism, and communism, have been. The passion of their emerging beliefs will en­gender opposing passions. They already are.

Just about every large business in America is now run by its human resources department because everyone appears to be harassing and assaulting each other or accusing each other. Is this the sign of a healthy country?

Following the trauma and drama of 9/11 we started discovering in some new way our nation’s meaning—what it was in history, meant in history, meant to us. We talked about it. We saw: The first thing the firemen did after the towers fell was put up the flag.

Twenty years in our history is treated as all sin, sin, sin. We’re like mad monks flagellating ourselves. We are going through a non­stop condemnation of our past and our people and their limits and ignorance. It isn’t healthy. Reflection and honest questioning are, but not this. And so much of it comes from our most successful and secure, our elites and establishments. Regular people look and think, “But if our professors and media leaders and tech CEOs hate us, who is going to help us think our way out of this mess?” And they know someone has to, because they know in a way elites can never understand, because they have grown so used to security, that no nation can proceed in the world safely and fruitfully when at bottom it hates itself.

Watching the ceremonies last weekend it was understandable if you thought: We started out rediscovering our love and wound up obsessed with our sins. We started out together and wound up more divided than ever, driven apart by op­portunists who set us at each other’s throats.”

My hope is that we can remember and teach our young people the best in who we are and who we want to be.

And may we continue to remember those who are still trapped in Afghanistan.

Posted by Arthur Christopher Schaper at 9:29 AM