A number or people are quite grateful that I am exposing those indoctrination agents in our midst. I also received some nasty emails from people who think that communistic hate groups like Black Lives Matter and cultural Marxist LGBT ideologies should be celebrated and treasured.

And here's info on yet another teacher, this time in San Pedro, CA: Rachel Bruhnke. 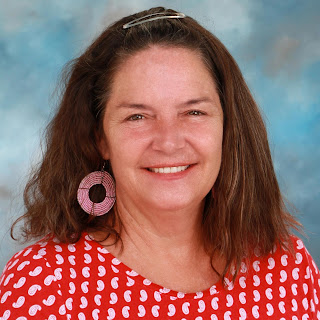 I received this tip last week:

Arthur, there is a teacher at CSULB who is a devout communist.   She lives in San Pedro and she holds communist, pro Castro rallies (when Castro was alive) at a local coffee shop in pedro, and now holds “peace rallies” during Los Angeles harbor fleet week and calls all the navel men and women fascists and baby killers.  She makes a point of influencing young people, high school kids, and has teenagers speak at her rallies.  God knows what she does in private (and masked). I don’t think this woman is evil or wishes harm upon anyone (although some of her group certainly do wish harm, one in particular called for the assassination of Donald Trump). I do want her to stop indoctrinating young people and college students. As you may know, Project Veritas has uncovered a communist teacher, Gabriel Gipe, in Sacramento and has gotten that teacher fired.  If you are unaware of this recent event, I advise you to check it out on YouTube, there are tons of undercover videos etc. and a really great hour long school board meeting with parents screaming at the school board to get communists out of public education. I wish to be an anonymous whistle blower in this case.All I want to do is send her a message— CEASE AND DECIST and a link to the Project Veritas video of the teacher getting fired. You are a well known conservative activist and are in a better position to call this woman out.  I do not want to get Project Veritas involved, at least not yet.  I believe that the threat will be enough. A private message and a link the the Project Veritas video could be sent via Twitter or via facebook messenger.  I have no wish to “out” this woman as a Communist on her Twitter or Facebook. If you are willing to do this, let me know and I will send you her information. I found the recent Sacramento parent school board meeting inspiring and a good sign that regular folks are getting wise to all this Communist propaganda and CRT bullshit.  Let’s strike now while the iron is hot!

I told this contact that I was more than happy to oblige, but I had to explain to him that I needed to make this information public. Quietly telling rabid communists to stop screaming and yelling their Marxist ideologies in the streets on social media is not going to work. The commitment to this violent madness requires stern confrontation.

He understood, and here is some of the information that the contact sent me: 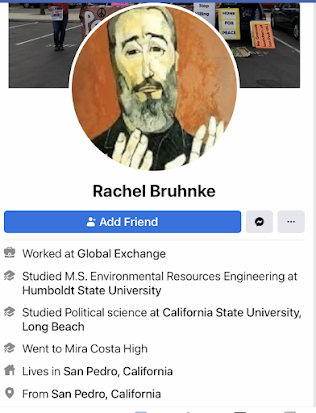 She shared this image in a group called Cold War Truth Commission: 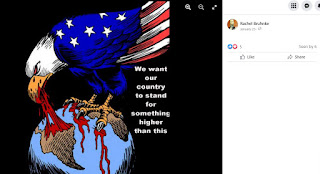 No one should sweep under the rug that the American government has done some really bad things, but it's wrong to say that the American nation and the country is all bought into this.
And the notion that the United States should never have taken a stand against global, tyrannical communism? That is nothing short of outrageous--and yet that is Bruhkne's position.
Here's what else she has posted on her Facebook page regarding America's fight in the Cold War:

Check out some of her posts on social media here:

This is so offensive! I cannot believe that anyone would eulogize a blood-thirsty hypocrite and tyranny like Fidel Castro.

Reminder: this woman is a teacher in the classroom!

What does she specifically want to renounce about President Ronald Reagan? That he opposed communism: 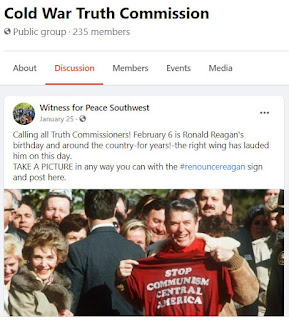 According to communists like Bruhnke, those who fought against the Soviet Union were the bad guys. Really. The Soviet Union, North Korea, Cuba, and now Venezuela, they are all the good guys, doing good things for their people (rationing, sanctions, massive arrests, beatings in the streets, rampant corruption and poverty), and all the Western countries that speak up for freedom of speech, commerce etc. are somehow the bad guys. Really.

Again, I wonder how many Soviet refusniks, Venezuelan refugees, Cuban immigrants, and North Korean defectors would agree with Brunke's take on communism?

She actually wrote that China (the Chinese Communist Party) is our friend!
I wonder how the Muslim Uighurs feel about "Friendly China"?
She is clearly a champagne socialist, especially because she has the audacity to claim that Cuba is a well-run country, a perfect model of communism, all while living in one of the richest sections of Los Angeles County (and she went to Mira Costa High School, in the uber wealthy city of Manhattan Beach, CA):
If she is such a fan of Cuba, why not live there?
If Cuba is such a great country, why are so many people fleeing that country to live in the United States?!
She currently works at Port of Los Angeles High School, too. Remember what my contact shared with me:
She makes a point of influencing young people, high school kids, and has teenagers speak at her rallies.  God knows what she does in private (and masked).
You can find her profile here.
You can send her an email here.
Contact information for the high school's Board of Trustees:
sprizlow@polahs.net
310-832-9201 ext. 232 (phone)
Also Contact the Port of Los Angeles Executive Director:
Eugene Seroka, Senior Administrator (310) 732-3456
Email: community@portla.org
We need answers, and we need teachers like Bruhnke to stop pushing their Marxist, Communist bigotry in the classroom!
Posted by Arthur Christopher Schaper at 1:15 PM