Statement to the Torrance School Board: End BLM/LGBT Indoctrination in the Classroom

My name is Arthur Schaper, and today I speak with you in my capacity as the Organization Director for MassResistance. For over 25 years, MassResistance has been fighting the corrupt cultural Marxist influences which have bombarded the public school system. We have targeted the LGBT agenda, and that fight has now included going after Black Lives Matter and Critical Race Theory. We have had a number of successes in Massachusetts, Missouri, and even here in California.

It’s really shameful to see what is now happening in the Torrance Unified School District.

Later on, I received complaints about Kelsey Redgrift, a special ed English teacher at South High School bemoaning and wailing about her “white privilege.” Teaching people to be ashamed of themselves because of their skin color is a violation of natural rights, regardless of whether a person is black or white.

Then I received more disturbing complaints, once again, about West High School.

English Teacher Margaret Cunningham and Junius Welch are promoting Black Lives Matter and LGBT ideologies in their classrooms, including the discredited hate group known as “The Human Rights Campaign.” That organization was founded by an accused sex offender, Terry Bean, who tried to buy of his victims’ testimony in court. The now -former president, Alphonso David, was also fired for covering up the misdeeds of now-resigned New York Governor Andrew Cuomo. A student took the pictures of Cunningham’s classroom. I sent the photos to each of you earlier today.

Let’s not forget that parents have shared with me the very invasive sex-related surveys given to students at Richardson Middle School and South High School. These questions ask flagrantly inappropriate. We are talking about 12 year old, here! This is just another perverse push to normalize sexual perversion and deviance. It’s science that there are two sexes, that there is natural affection of man and woman. The notion that we should be pushing LGBT ideologies onto kids in the classroom is untenable. 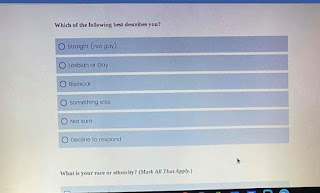 All of this needs to stop.

Teachers must cease from their political proselytizing in Torrance classrooms. These propaganda flags must be removed. Teachers do not have the same First Amendment rights when they serve in the classroom. Two supreme court decisions have settled that issue.

The school district needs to enact a clear-cut policy which ensures that students do not misuse official school logos and labels when exercising their First Amendment rights.

Posted by Arthur Christopher Schaper at 9:36 AM