Keith Hardine: The People of California Want a King

From the Desk of Constitutional Self-Defense Expert Keith Hardine:

“But when they [the People] said, ‘Give us a king to lead us,’ this displeased Samuel; so he prayed to the Lord. And the Lord told him: “Listen to all that the people are saying to you; it is not you they have rejected, but they have rejected me as their king. As they have done from the day I brought them up out of Egypt until this day, forsaking me and serving other gods, so they are doing to you. Now listen to them; but warn them solemnly and let them know what the king who will reign over them will claim as his rights.” 1 Samuel 8:6-8, NIV 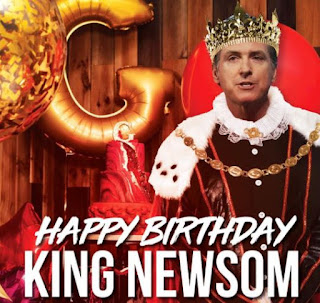 Breitbart’s JOEL B. POLLAK on September 14 wrote: Newsom ran against “Trumpism” [THE CONSTITUTION] and Republican caricatures, which proved enough to carry the day handsomely.With recall defeated, Democrats are already discussing ways to shut the door on future recalls, debating ways to reform a process that was established over a century ago in the original “Progressive” era as a last resort to ensure accountability.And this is what king Newsom who prevailed over the Recall thanks to the People of California, has claimed as his right to rule:Life in California under Democrat Governor Gavin Newsom by Randy Thomasson of SaveCalifornia.1. One-third of California restaurants were permanently closed in 2020-2021Thousands of Californians have their jobs just because they don't want the "jab"2. He sided with anti-family teachers' unions, not science, to keep schools closed3. Millions of children are being unnecessarily masked for several hours each day4. Children in government schools are being sexually indoctrinated all the more5. Preborn babies are even more in danger of losing their God-given right to life6. Tens of thousands of convicts -- including violent criminals -- have been released7. Convicted murderers -- who forced victims to lose their lives -- won't lose their own8. Water has been released, wasted, and prohibited without building new dams9. $150 million has been siphoned away from the state's fire protection budget10. California wilderness has 163 million dead trees, providing explosive wildfire fuel11. Homelessness and transient crimes have skyrocketed, endangering families12. $30 BILLION In fraudulent payments have been made by the Governor's EDD13. California has abnormally high gas taxes and regulations driving up prices14. We no longer are a "government of the people, by the people, for the people"So the question for the People of California was, would you "hire" Gavin Newsom again by voting "no," or will you "fire" him by voting "yes," in the September 14 Recall Election?THE PEOPLE’S ANSWER WAS—give us a tyrannical king (Governor) to continue his rule over us!See and share the SaveCalifornia.com Recall Election Center (candidate report cards)* Source—Gavin Newsom to Remain in Office; Democrats Want to Limit Future Recalls.https://www.breitbart.com/politics/2021/09/14/gavin-newsom-to-remain-in-office-democrats-want-to-limit-future-recalls/
Posted by Arthur Christopher Schaper at 8:24 AM