Following the pressure from the liberty, libertarian, and all around limited government wing of the Republican Party in the House (which is the growing majority of the majority), Boehner read the handwriting on the wall, and decided to step down.

Of course everyone is happy.

The fight is not over, however.

His planned successor, based on the current House Leadership team, including Kevin McCarthy of California and Jason Scalese of Louisiana, are poised to continue a piece-meal, let's pretend to fight but not really.

I was OK with McCarthy as Majority Leader, in that he was 100% pro-life and worked from the ground up as a private businessman then elected official.

The problem for me, and for many, rests on his support for legal status for illegal aliens, just short of citizenship, plus his strong ties with the current leadership, which has all but failed to fight the good fight - the way many concerned citizens are already in Huntington Park and throughout the country at the local and state level. I contacted McCarthy;s office today, and I got no clear assurance that he will kill Big Business cronyism, either, including the Ex-Im Bank.

I appeal to all California conservatives, citizens, constituents who care about country:

Call your Congressman, and tell them to support strong consensus conservative leaders, who will promote a pro-liberty, pro-constitution, pro-limited government agenda.


Choose one from this list for successor to House Speaker:

Do not recommend Mark Meadows. He has no interest in the Speakership, as his office in Washington DC just informed me today.

Congressman Steve Knight has seemed to indicate that he will step behind McCarthy just because. That is wrong. Outraged citizens hav already confronted him for voting to fund the Department of Homeland Security without ending the unjust executive amnesty implemented by Barack Obama.

He needs to get the message: No more insiders, and more than just outsiders, but conservatives who care about God and country, about the constitution and state sovereignty, life and liberty must head the House of Representatives.

Call Steve Knight, and tell him "No more status quo!"

Dana Rohrabacher of Surf City, CA has routinely denounced illegal immigration and the rogue President who does not do his job, Demand that he support a strong conservative for the Speakership.

Contact Duncan Hunter, Jr. of Alpine, CA, and demand a Speaker who will fight President Obama and for the conservative cause.

Doug LaMalfa in Modoc County needs to know - his vote counts, and constituents want their concerns counted above all else.

Ed Royce of Orange County sits on the powerful Foreign Relations Committee. Should he lose his chairmanship if he refuses to vote for a better speaker? Let him know: "No McCarthy!"

Darrell Issa of Vista, CA fought on the House Oversight Committee. Should he fight for a better speaker for his constituents, too? Tell him: "No McCarthy!" and recommend one of the four listed above.

Paul Chabot is running to replace Peter Aguilar, one of the most left-wing freshman Democrats in the House. Call Paul and Peter -- tell them "No McCarthy! Steve King, Raul Labrador, or someone else for Speaker!" 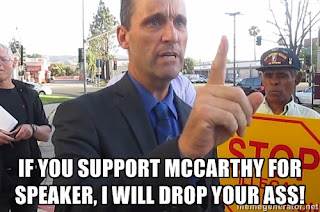 Please leave a comment below once you have contacted your own or one of the above listed Congressmen. Let's remind the House, leadership and membership, that they represent "We the People", not "We the Big Interests: Business, Labor, Amnesty, etc".