Donald Sterling is a Hater -- And So Are You! (Confused?) 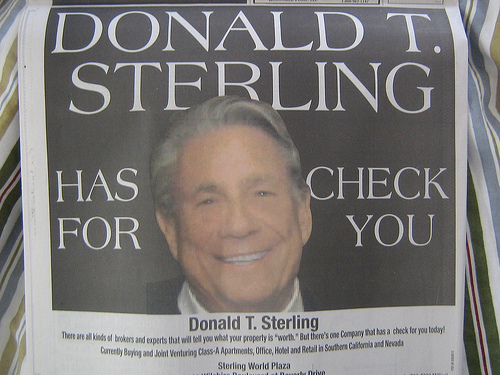 I recognize that name. He's the big time philanthropist who advertises big prizes, awards, and giveaways in the LA Times.

He must have a lot of money.

He also owns the LA Clippers

And following the his incendiary, and yes

comments to his girlfriend, tape-recorded and released for the world to hear it may appear that no one will take his money now.

Donald Sterling was yelling at his girlfriend, telling her not to take picture of herself on Instagram with other black people. I say "other" because Sterling's girlfriend is half-black and half-Hispanic.

The uproar over his leaked comments hit the press.

The Daily Breeze blasted his face on the front page, next to his girlfriend, then reported on the rising reactions against the man for his comments.

So, rich guy Donald Sterling is racist, or is he a racist, in that he should be defined by the feelings he has about black people?

Or is he a hater?

He dated a woman of mixed minority heritage. But he doesn't like black people.

The guy is racist, and they guy is very mixed up, too.

The greater blowback, however, flies to hollow nonsense which has dirtied up the Internet. He donated to Democrats, yet he was a registered Republican. Or was he?

And therefore, Sterling is a representative for the Dems, or the GOP?

Give me a break! He also donated to the NAACP. The association has recently given him back all their money. When will the leader of the North Carolina chapter apologize for calling black Republican US Senator Tim Scott " a dummy."

So the NAACP is racist by association, then, too?

When does the hater not-so-merry-go-round end?

I picture Jason Alexander, aka George Costanza taking center stage and singing "I'm a hater, you're a hater. . ."

Diet Dr. Hater, anyone? Do you remember that one Seinfeld episode, where Elaine was dating a guy whom she thought was black? She didn't have the courage to ask if he was black of not, because that would be. . .racist.

Still, Elaine started seeing herself as black by association. When one the servers at the local diner brought her the check, Elaine said "I hear ya, sister!" because the waitress was black.

Wow! I guess that makes Elaine a hater, too.

At the end of that episode, Elaine's boyfriend finally admits that he thought she was Hispanic. "What? No, I'm not."

"So, we're just too white people?"

Does that make them racist because they realized that they were not the races that they thought they were?

Maybe Sterling could have learned something more about race relations watching Seinfeld. Then again, he's probably so busy watching all those Clippers games.

But he wants to watch them without black people. . .and his girlfriend was black, right?

And how did this whole tizzy get started, anyway?

Oh, yeah, someone was recording his private conversation. That damned NSA! Speaking of which, would the media not be spending its wasted ink and print exposing the outrageous, shameful, criminal invasions of the federal government into every private person's cellphone, email, and Google searches

Oh, why are we stopping at Sterling, then? Was it not the LA Times which printed the philanthropist's advertisements weekly, monthly, year in/year out?

So, the LA Times is racist too!

That is racist! You are all a bunch of haters, Daily Breeze! Should we call them "The Daily Sleaze?"

Yes, except on the days when anything that I have written is printed there, too.

The whole culture of entitled offense is getting really annoying.

Clive Bundy is a hater because he compared slavery to welfare. A stupid analogy? Yes. A racist? No.

The New York Times went out of its way to make him look like one, thought, editing his remarks so much that no one read about his remarks in support of all that Hispanic people are going through in this country, as well as the damaging effects of the welfare state.

So, since the New York Time when out of its way to portray Bundy as a hater, then they must be haters, too!

The real alarming element in all of this, frankly, falls on the failing, flailing Fourth Estate, the Press, which is supposed to be exposing misrule through publicity, but has spent more time printing these limited, incendiary stories about individuals who make off-hand remarks about race, as if they define the current state of race relations.

Donald Sterling is a hater, and so are you!

Donald Sterling made racist remarks, and has deep prejudices? Yes.

But why were we listening to this private conversation in the first place? And why is this man's inner perversions about other people taking so much press space in the first place in the face of Secretary of State John Kerry's remarks that Israel has created an apartheid state? Such remarks from an international official have timeless and global implications. He also ought to step down.

Kerry the racist! Where's the front page headlines on this guy? He said these awful remarks in front of lots of people and he intended other people to hear them.

Or how about when the former president of Iran Ahmed-nutjob, who "We are going to blow Israel off the face of the earth!" Such comments cannot be ignored, as they represent an immoral, evil leader in a hostile nation suggesting serious, damaging force against another country.

Even lib-comic Bill Maher takes threats against the state of Israel seriously. He also had the savvy to call out Michelle Obama's racist remarks about other blacks, "who are more interested in balling than studying".

The black guest on Bill Maher's show was surprised by that remark, because he was ready to blame a white politician for that remark.

I guess that makes him a hater, too, then, huh?

You're racist!
Posted by Arthur Christopher Schaper at 9:42 PM