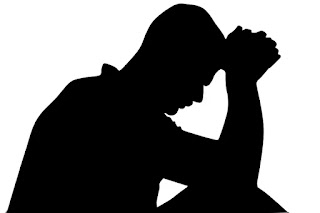 There is no greater source of pain for an individual than ... self.

Consider what happened to Adam and Eve when they sinned, eating from the tree that was good, but not good for them:

"6And when the woman saw that the tree was good for food, and that it was pleasant to the eyes, and a tree to be desired to make one wise, she took of the fruit thereof, and did eat, and gave also unto her husband with her; and he did eat. 7And the eyes of them both were opened, and they knew that they were naked; and they sewed fig leaves together, and made themselves aprons." (Genesis 3: 6-7)

When they ate from the Tree of the Knowledge of Good and Evil, Adam and Eve looked at themselves. They knew the Law, a standard which will forever bear witness to our failures, to our incapacity to live or do anything right apart from God. We cannot live independently of His life in us. It's just not possible.

But Adam and Eve sent the message to God, their loving, gracious Creator, that they did not need Him, when they ate from the fruit of the tree that was good, but not good for them.

And such has been the tragedy of mankind since then. To be in bondage to oneself, to fall into this trap that we can fix ourselves if we keep looking at ourselves, look for faults, and look for ways to correct those faults on our own, is the fast road to disaster.

With this revelation in mind, consider now the testimony of a young homosexual in Singapore:

Confession: I Wish The Gay Scene Was More Accepting & Inclusive

This candid piece from a 25-year old gay Singaporean reveals how lonely and isolating it can be for guys who don’t fit into the mould of the insta-famous gays.

I’m a 26-year old who has got nothing else to do on a Sunday night besides feeling depressed, so here’s me writing my story to pass the time.

How sad indeed, that he is dwelling on his feelings, how depressed he feels, and that he has "nothing else to do on a Sunday Night."

We can see right away why he is depressed: He is focused on himself. That is going to make anyone depressed.

Being a December baby has it’s pros and cons when I was younger, but nowadays, it just signifies how lost I am with where I am in my life.

Keep track of the number of times he uses the word "I" as well.

As a boy in primary school, he was preoccupied with himself early, as though he was not enough of a "boy." I have found this trend quite common among many of the testimonies from out-homosexuals, whether male or female. They are so uncomfortable in their very being as boys and girls, and they want to find some sort of affirmation of fulfillment from someone of the same sex.

This is not a sexual issue, though. It's an emotional lack, often originating in a lack of affirmation from the same-sex parent.

When I was in secondary school, I felt attracted to another boy in my class because he wore this super tight pair of pants that made his butt pop. Yeah, that was when I realised I was really into guys but I never spoke about it to anyone. I told myself to focus on my studies.

The emotional need turn into a sexual temptation. This transfer happens a lot for people who struggle with same-sex temptations.

And then booyah, NS came about.

It was 2013, I was just a dumb fat kid, actually looking forward to BMT since I wanted to lose weight.

Yet another reason he was so self-conscious. He focused on Himself a great deal, this time because of body image issues.

The moment I stepped into my bunk, I glanced around the bunk and met eyes with another guy. I felt attracted to this person but it wasn’t intense, so I thought that hey, I should be ok.

But when I met another person from another bunk in the same platoon, I realised how utterly screwed I was with what I was feeling. I felt confusion and the confusion only grew worse when guys were just running back and forth from the bunks to the toilets in just their briefs.

We are getting a window into the intense inner dialogue of an individual. The fact that he has fixated on his inner stirrings, his inner worries and cares shows once again how much he is in bondage to himself.

I grew depressed, hated myself for what I felt as I believe that it was wrong to be gay. I longed to fit in with the rest of my army mates, to be able to sit around the table to discuss girls and be a ‘regular straight male’.

But I couldn’t change who I was. During my 2-year stint in National Service, I fell for another 2 guys. All 3 of them are straight and it totally crushed me. My depression got worse as a result. I wished that there was a pill that could turn me straight.

ROAD TO SELF ACCEPTANCE

The road to self acceptance took some time for me.

The first time I came out to someone was when I told my best friend from poly. I remembered how frightened I was. Fortunately, she told me that it’s okay, that she kinda figured what I wanted to talk to her about.

Fast forward to now, I’ve finally accepted myself for who I am. But the road to self acceptance certainly wasn’t a smooth journey for me. I still remember knocking on the door of my school counselor and crying in her office during my college days.

That counselor really failed this young man. She needed to tell him that his feelings do not define him, and that his proper sexual bearings will fall into proper alignment when he deals with the deeper sense of loneliness and inadequacy.

Although it took me quite some time to come to terms with my sexuality, slow progress is still better than no progress.

FEELING REJECTED BY THE GAY COMMUNITY

I may have accepted myself for who I am. But I feel unwanted by the gay scene in Singapore.

Again, notice the refrain of "I ... I ... I." The fact that he bases his sense of peace on whether others will accept him or not shows the true source of his depression: looking to other people to make him feel fulfilled and accepted.

I feel that I’m not good enough when I look at myself in the mirror and I compare myself to the insta-popular guys. It makes me feel like I shouldn’t exist. Even though I do want to know them (even trying to slide into their DMs), I know they’ll never reply.

Of course, like every other gay guy in Singapore, I did try the apps. But all it resulted in for me was silence.

I guess all I really wish for is just to have friends to celebrate my birthday with me or even just bring me to the gay scene and enjoy their time with me. But it feels like even that is too tough.

Being at work in the private sector, sometimes it still gets to me how I have no other way to spend time besides being at work, at home and doing some volunteer work.

I want to be called out by friends, hang out at tantric, have a few drinks, go to taboo, meet guys and have sex. But sadly, I still feel like I’m not good enough. Even though I went to the extent of losing weight from 86kg to 72kg recently.

Again ... "I ... I ... I ... I." No wonder this guy is sad, and small wonder that not many people want to hang out with him. People are self-centered, selfish, focused only on self are not that much fun to be around!

I’ve never been in a relationship nor have I had sex with anyone. Haha, I don’t even know if I’m a top or a bottom or versatile. I don’t even know what love feels like and that is really the saddest thing I could say.

Will writing all this here result in anything? I highly doubt so but yeah, I’m lonely and maybe I’ll just die sad and lonely.

I wish the gay scene in Singapore isn’t that hard to be a part of. But sadly, it is. I’m not sure if I’m the only lonely one here or if there are other gay guys out there facing the same issue.

But wouldn’t it be great if there was a club for LGBT youths to hang out together where it doesn’t feel like everything depends on your physical appearance.

Homosexuals like this young man are focused on themselves. They see themselves as inadequate, failing to measure up. They are lacking something, they feel lost or incomplete in some way. In too many cases, that sense of self-focus is a result of sexual or emotional abuse, all of which is NOT THEIR FAULT!

But, how these individuals deal with these traumas, that is their responsibility.

One has to remark, also, that for all the talk about "gay lifestyle," and "being gay," we have yet another admission that there is nothing really gay at all about the homosexual scene or the lifestyles, behaviors, and customs attached to it.

And this self-fixation cannot fix anything!

The answer is to look to the source of our life, Christ HIMSELF (Romans 8:1; Colossians 3:4)