On March 21, 2022, I wrote to Torrance City Manager Aram Chaparyan regarding the state of the city's finances. I was aware that the city reserves had drastically reduced to $500,000, in large part because previous city councils had continued to spend money that the city simply did not have. 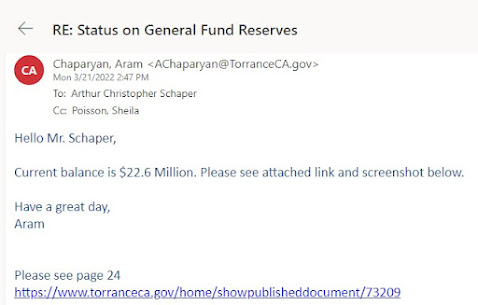 The city's current balance in general reserves is

The city is no longer in financial arrears!

There is NO NEED for a sales tax increase. NONE!

Check out the link and the report on Page 24 whicht city manager Chaparyan cited: 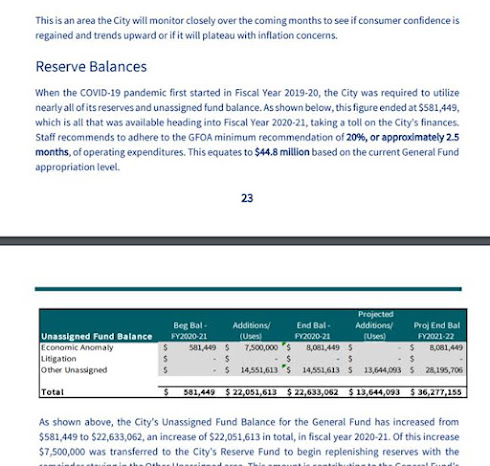 Here's a closer look at the table above:

With the most realistic projections considered, the city will have a reserve of $36,277,155!

That's a considerable amount of money on hand for the city!

The Board of Supervisors cannot muster the political capital to force up sales tax rates in the first place, since so many Los Angeles County residents are struggling from paycheck to paycheck as it is.

There is no reason to raise up the sales tax. What it really amounts to is that a majority on the city council is too lazy, too incompetent, or just plain indifferent to the needs of the residents in the city, and would rather gouge taxpayers instead of offering creative solutions to increase revenue.

Say NO to any sales tax increase!

Posted by Arthur Christopher Schaper at 10:57 AM