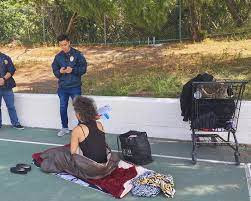 From The Daily Breeze:

Torrance’s 40-unit temporary housing shelter officially has an expected opening date — June 26 — and with it will come more stringent enforcement of the city’s anti-camping rules, officials said this week.

As site constriction for the Pallet shelter community nears completion, city officials and the Police Department are working to finalize on-site security measures and future police response to homelessness throughout Torrance at large.

A number of residents are understandably upset that the pallet shelters are in District three, right next to the police station, but also near residential areas in the city.

According to some of the city councilmembers, that was the best option in the shortest time possible. There is discussion about moving the pallet homes near the soon-to-be-opened transit center on Crenshaw and Mariposa. In my opinion, having the pallet homes right next to the police department is the best location, since it's easier for the city police to keep an eye on the lot, to maintain security, and ensure that the city will be safe.

If there are people who want to be homeless, who refuse to take responsibility for their lives, they are going to have to go somewhere else. This sounds harsh to some people, but the state of California and its rogue courts have started creating a system that enables dependence, homelessness, and the like. This really has to stop.

But People Assisting the Homeless, or PATH, an organization that has helped place 9,000 people into permanent housing since its establishment in 1983, said anti-camping laws don’t target the root issues that lead to homelessness.

“PATH has seen that enforcement rarely ends a person’s episode of homelessness,” PATH spokesperson Tyler Renner said in an email Wednesday, April 13. “Our approach to outreach is person-centered, trauma-informed and relies on building trust.

“Ultimately, any successful outreach or enforcement efforts,” Renner added, “must be connected to robust resources and lead to long-term housing.”

A 2018 landmark federal court decision in Martin v. Boise ruled that cities could not legally enforce anti-camping ordinances without first providing shelter for their unhoused populations — citing the Constitution’s Eighth Amendment guarantee of protection from cruel and unusual punishment.

It's wrong for a newspaper to engage in "newspeak" and call the homeless "unhoused." Renaming a problem to something more politically correct does not solve the problem. People are "unhouse" when they leave their homes, or when they go on vacation, since they are not in their house. The truth is that people living in the street are homeless. Let's not diminish that reality.

Torrance’s tiny home program fulfills that legal duty to provide some sort of shelter to the unhoused, according to Hart, meaning the city will fall within its rights to enforce the ordinance.

Police officers will be directed to offer a spot in the temporary housing program to any homeless individuals they encountered during service calls, Hart said.

If a person who is homeless repeatedly refuses to accept services or a place in the program, Hart said, they will be issued a citation or arrested, depending on the situation.

These individuals who refuse to receive help need to leave the city. It's as simple as that. They will not be allowed to camp on people's property or on public property.

“It’s important as the chief of police to let everyone know that the direction I’ve been giving staff is that we will follow constitutional policing,” Hart said, “which guarantees the rights of all people — the city of Torrance residents who live in homes and also the people on our streets.”

One question that remains, however, is what the city will do if the new shelter, in a parking lot behind the courthouse at the Torrance Civic Center, is at capacity.

The Los Angeles Homeless Services Authority’s 2020 homeless count survey reported 332 unhoused individuals in Torrance alone — a 106 person increase from the previous year. While LAHSA’s latest homeless count data won’t be released until July, some members of the City Council said they believe the numbers have likely increased in the past two years.

“That’s one of the big concerns that I have about this program,” Councilman Mike Griffiths said. “The fact that our shelter is relatively small in comparison to the unhoused that we know to be in our community —  I’m very concerned that we’re just going to be back to square one.”

The city of Torrance needs to join with other cities and refile a lawsuit to overturn Martin v. Boise.

Anti-camping enforcement will be determined essentially on a case-by-case basis, Hart said during the Tuesday, April 12, council meeting, depending on bed availability at the shelter. Legally, the Police Department cannot cite or arrest the unhoused for camping if there are no tiny homes available.

“The cycle for the Police Department will be to continue to identify people in the city who are homeless and offering them services,” he said, “but there will be no enforcement of the anti-camping ordinance if there isn’t an available bed.”

The tiny home program is designed to be temporary, and will be stocked with supportive services to help transition peopls who are homeless into permanent housing, according to Deputy City Manager Viet Hoang.

“Our hope is that someone can transition from homelessness to permanent housing in the three to six month time frame,” Hoang said, noting that there are various factors that impact that time frame.

“Homelessness is as unique as the individual,” Hoang added. “Some people will need more help than others.

The second challenge, Hoang said, is the actual availability of housing in the area.

Torrance’s programs will focus on transitioning its clients to three types of permanent housing, Hoang said: Reunification with family, permanent supportive housing (with long-term supportive services), and housing subsidies (which could include a housing voucher to help cover monthly rent).

On-site coordinators, who will know the individual’s situation and the resources available to them, will create and manage the housing plans.

Harbor Interfaith Services, a San Pedro nonprofit, was officially awarded a contract to operate the site on Tuesday. The organization will hire a program manager, two intake coordinators/case managers and five resident aides to operate the program on a 24/7 basis.

Those employees will also help program residents access services necessary to prepare them for permanent housing, including for mental health treatment.

Some of those services are:

Besides enforcing the anti-camping ordinance where possible, Hart said, the Police Department will increase its on-foot patrols near Civic Center and potentially use drone technology to monitor the site from above to discourage loitering nearby.

The homelessness problem has gotten worse in the city of Torrance only because of meddling politicians and bad courts who want to make this problem worse. There is a big industry getting big government money to keep the homelessness problem growing.
While the pallet homes is a temporary fix, what is needed long-term is a robust effort to push back on the Martin v. Boise judicial tyranny forcing cities to give funds to people who will not get their lives together.
Let's hope that enforcement builds up quickly as serves as an effective deterrent to end the homeless plague in the city of Torrance. It has gotten so bad, so out of hand, that one former resident, who recently moved to San Pedro, informed me that port section of Los Angeles has pretty much eliminated the homelessness problem, and that area looks better than Torrance does right now!
That's embarrassing. Torrance is better than this. We didn't want to turn into Los Angeles two years ago, but now if Los Angeles is looking better, then let's follow their deliberate model and put an end to the rampant loitering and camping on public causeways.
Posted by Arthur Christopher Schaper at 9:33 AM