Amazing job by police to keep attackers away! Incredible speech by Milo Yiannopoulos -- who is openly homosexual -- on the uncomfortable LGBT truths others won't talk about.

See video below of Milo's speech!

The police did quite an amazing job of keeping the Antifa hoodlums far enough away that the speeches were able to go on undisturbed. It's disgusting that such extreme security was necessary in a city that considers itself the birthplace of freedom in America. But they did it.

The stage for the Straight Pride speeches, set up on the north side of City Hall in City Hall Plaza. 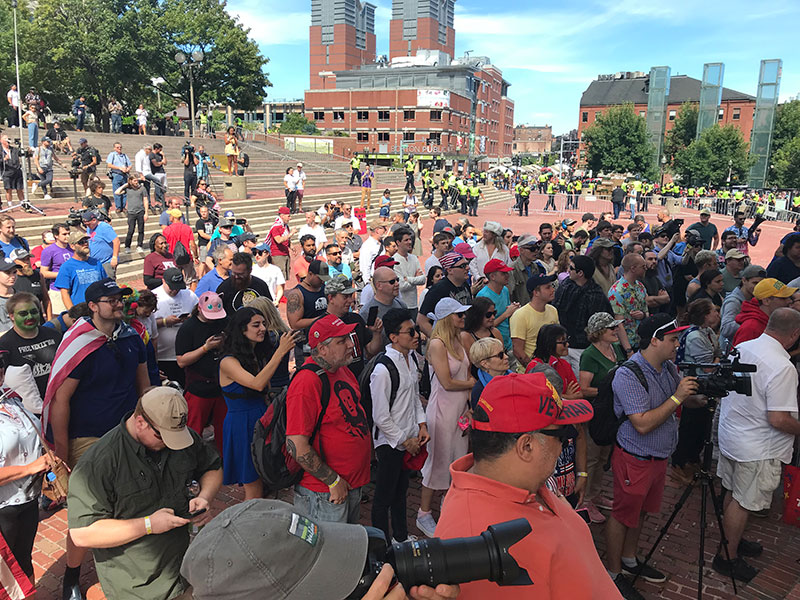 The crowd in front of the stage. It would have been much bigger but it was difficult for people to get in. Note the police in the background. 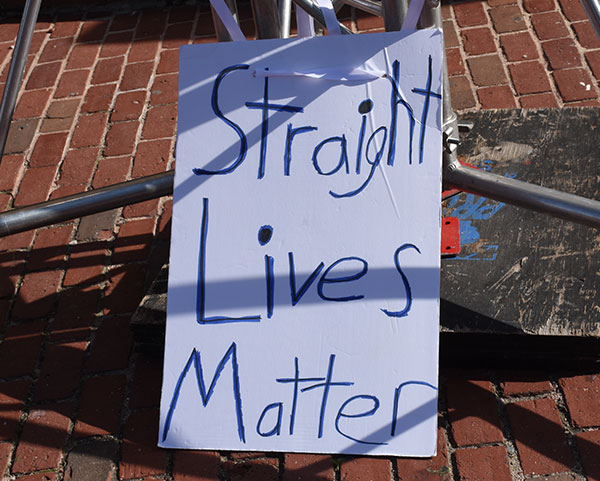 Can you get more politically incorrect than this? 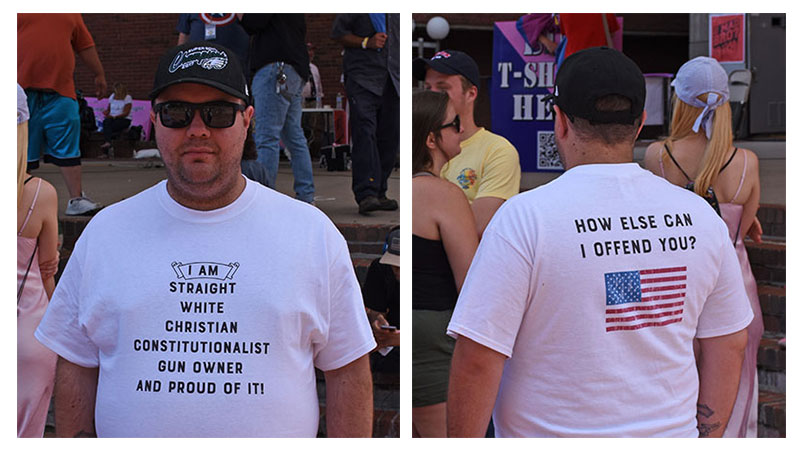 This fellow was clearly having more fun than should be allowed in Boston! 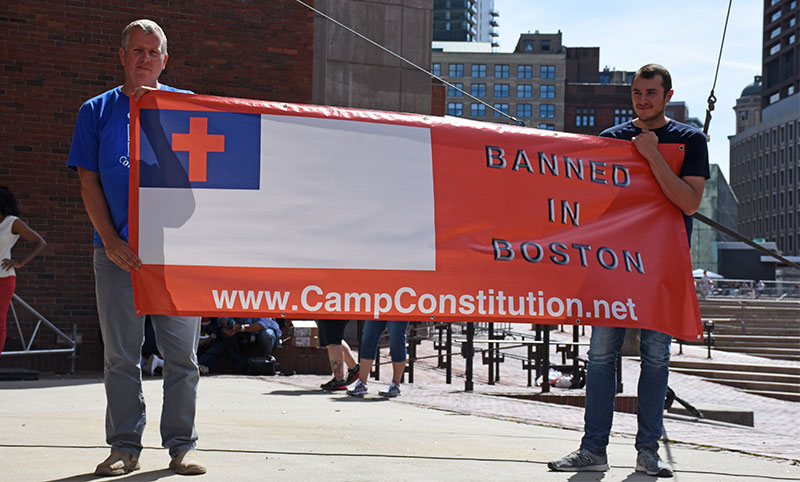 Hal Shurtleff (left) and his son (right) run Camp Constitution for kids. Boston Mayor Walsh has refused their request to raise their Christian flag over City Hall, although the "gay" rainbow flag, the "transgender" flag, and the flags for Communist China and Cuba were all allowed. Of course, Walsh also denied the Straight Pride flag request. 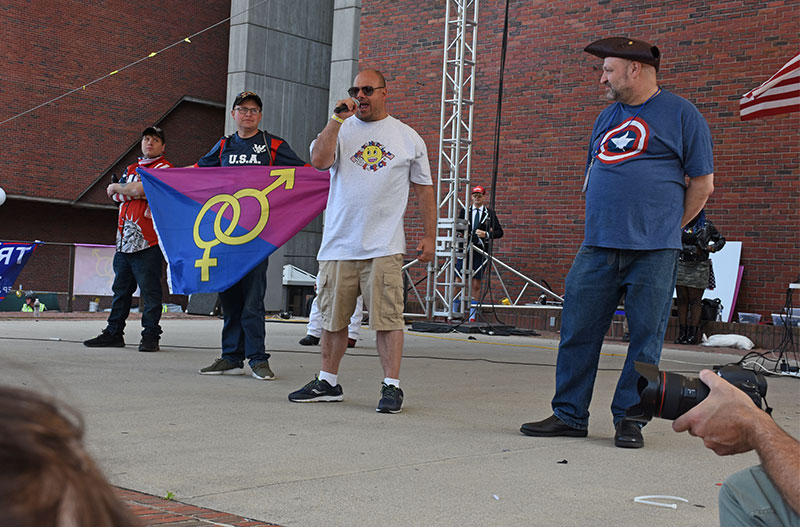 Before the event (and even afterwards) the Boston media, politicians, and liberal establishment all parroted the Leftist line that the Straight Pride event was really about "white supremicism" as well as "anti-woman." That was generally presented as fact.
Really?? Below are the speakers that day. Do they look like white supremacists or anti-woman to you? The smears are, as usual, all nonsense.
Their speeches were mostly about how great America is and their personal experiences overcoming adversity. (Unfortunately we didn't get all their names. Milo was the final speaker.) 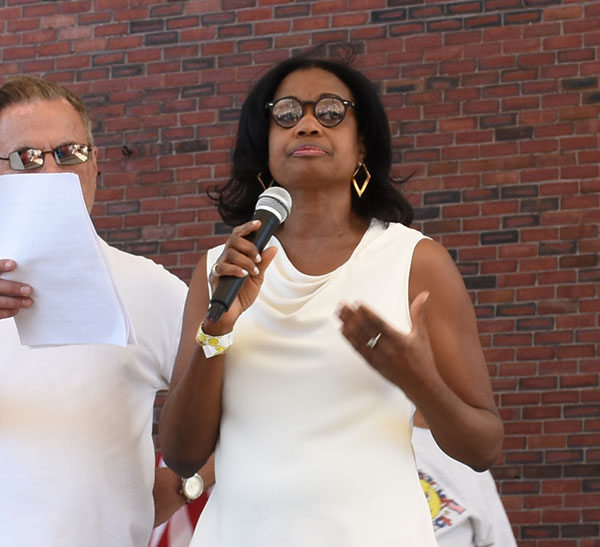 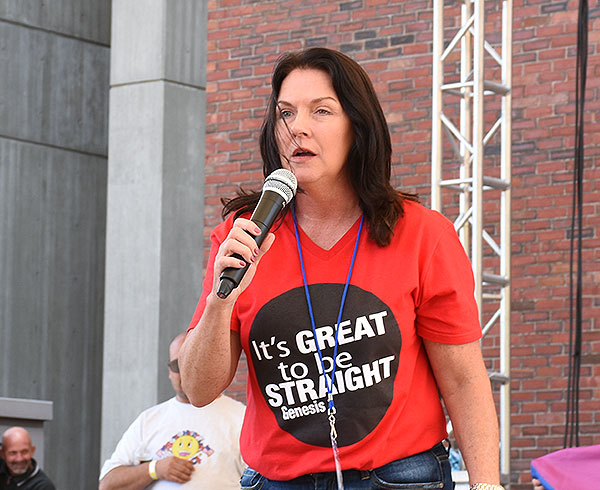 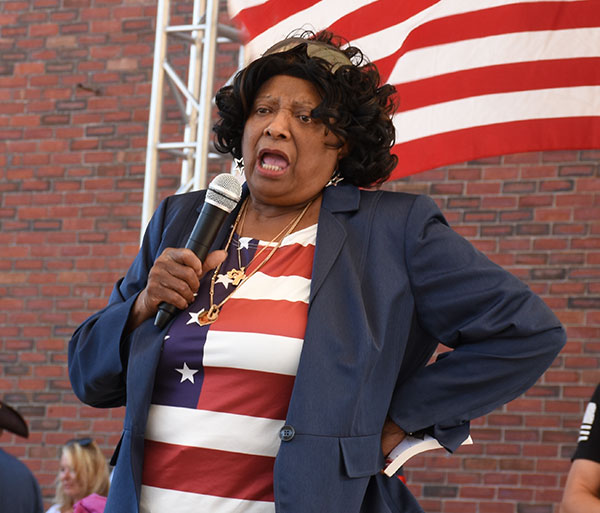 The famous "Barbara from Harlem"! 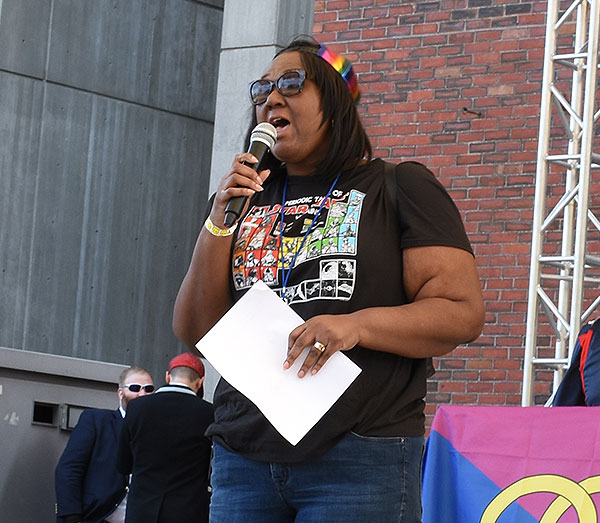 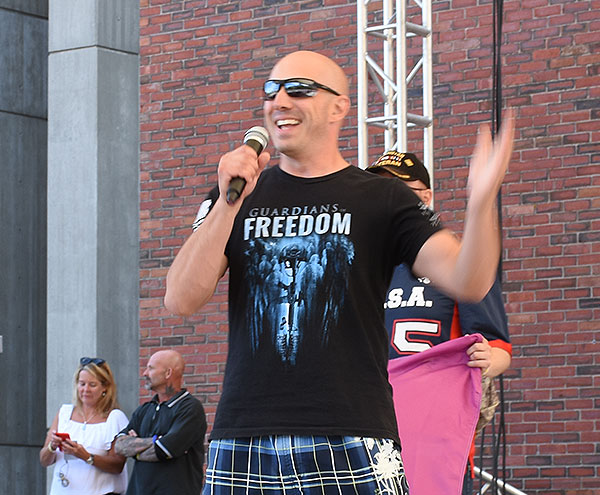 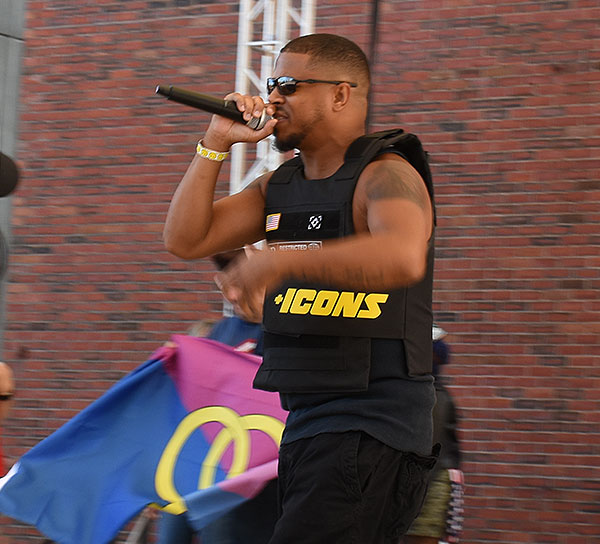 This speaker is a member of the "Proud Boys" organization, which is known for showing up around the country and confronting Antifa thugs. The Left universally smears the Proud Boys as being a "white supremacist" group. A bit hard to believe, actually, but Leftists never let facts get in the way of emotion. 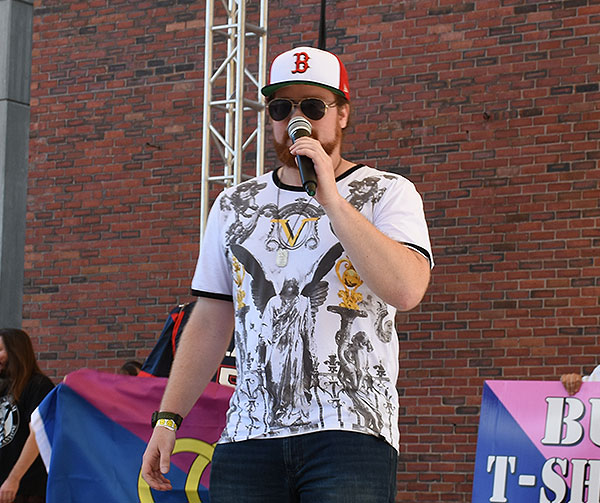 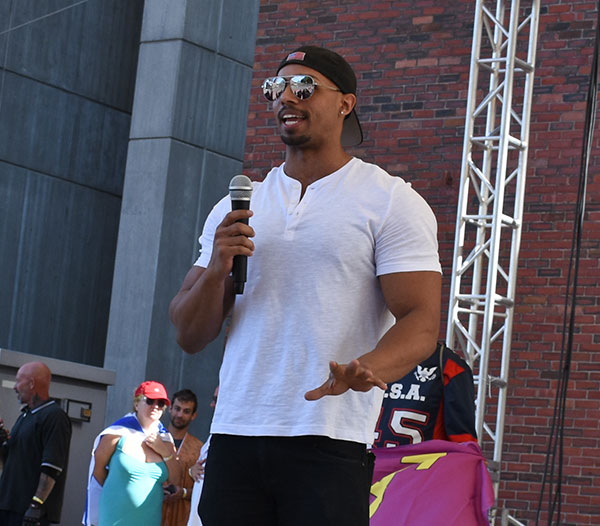 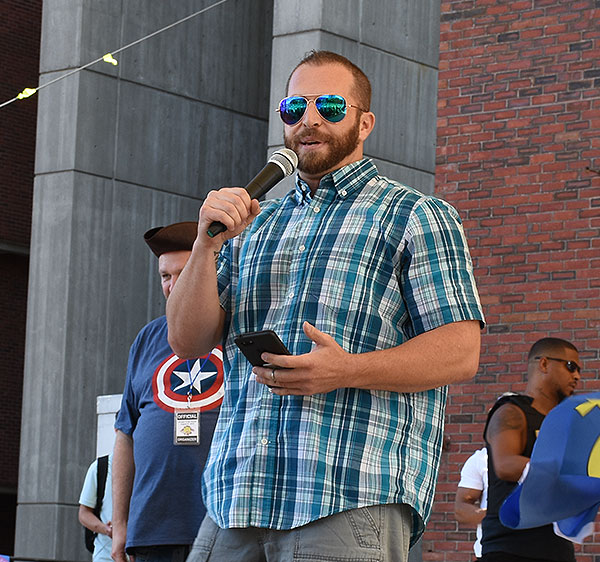 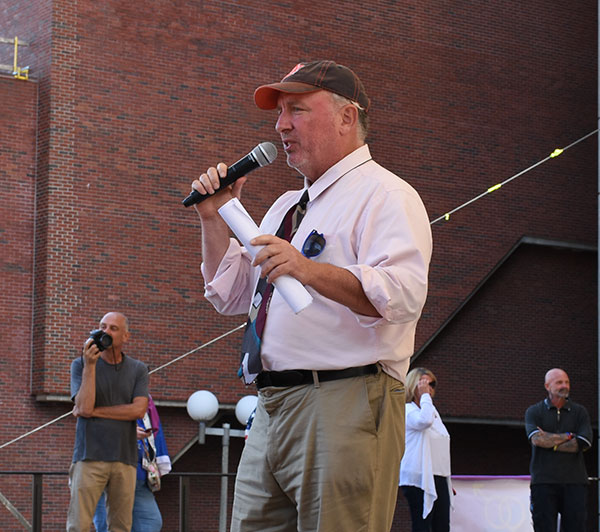 This is the lawyer who successfully helped the Straight Pride group fight the maze of obstacles the Mayor tried to put in their way.

The last speaker was Milo Yiannopoulos, the Grand Marshall of the Parade (and an openly homosexual, "married" to a man). Milo is a well-known political conservative (wearing a MAGA hat), and is also brutally honest about the destructive nature of the LGBT agenda, lifestyle, and behaviors. 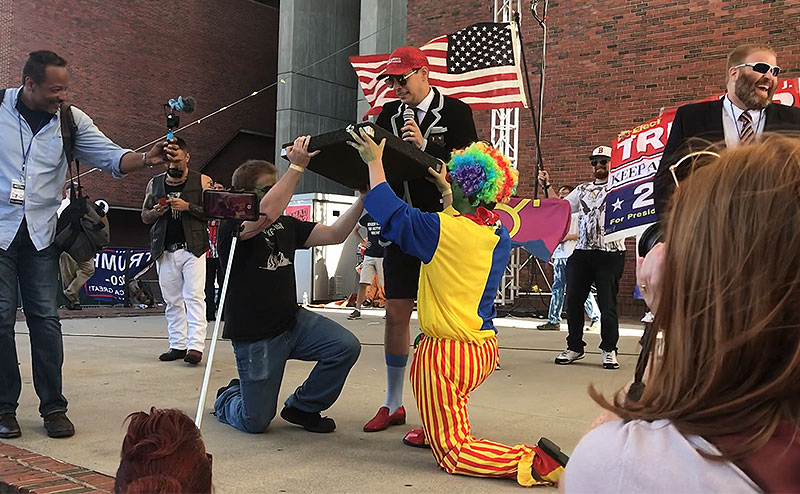 Milo insisted on a podium, and the organizers were happy to comply the best they could.

Speech by Milo Yiannopoulos at Straight Pride in Boston (9:29 min) 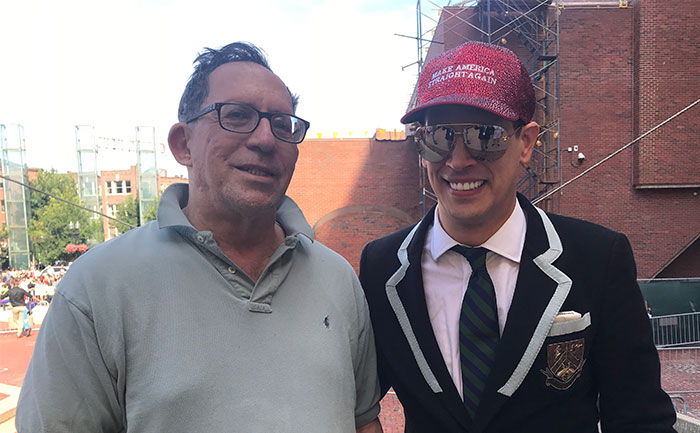 Brian Camenker of MassResistance shares a few laughs with Milo. 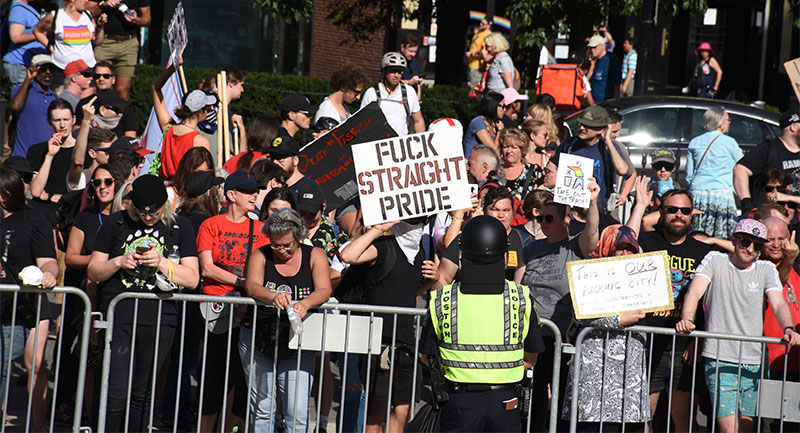 This is what Milo was pointing to from the stage during his speech. Even after the speeches were done, the Antifa throng continued their harangue outside the barriers. 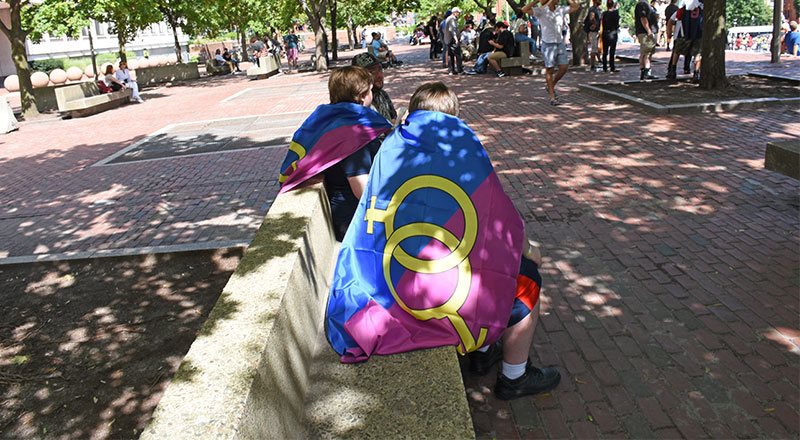 Wrapped in Straight Pride flags. These kids would probably get suspended for doing this at school! 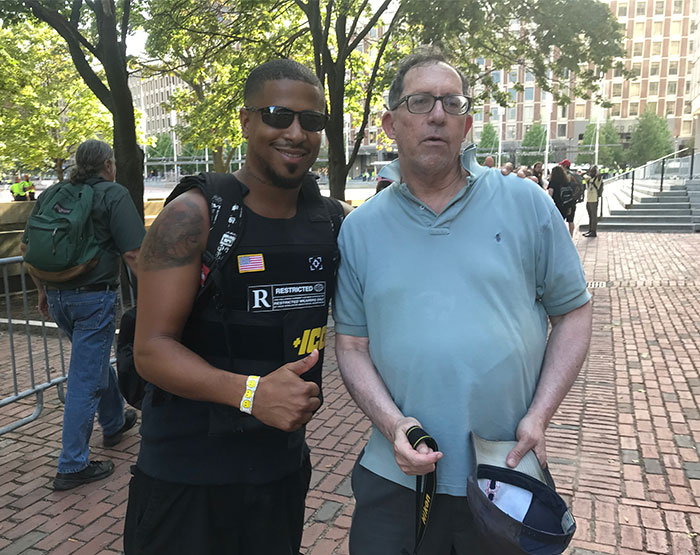 Camenker of MassResistance with the "white supremacist" Proud Boys member.

Please help us continue to do our uncompromising work!
Our successes depend on people like you.
Donate to MassResistance
Your support will make the difference!
Posted by Arthur Christopher Schaper at 11:12 AM