In previous posst, MassResistance reported on the efforts of our Texas and Houston MassResistance chapters to stop another Drag Queen Story Hour, this time in Leander Texas, a conservative-leaning suburb of Austin, Texas.

When our activists found out that the Leander public library was hosting their own Drag Queen Story Hour, they hammered the Leander, Texas city council. They received an overwhelming number of negative calls and emails demanding that the city cancel their Drag Queen Program. When a local “progressive” church took over the event and agreed to host it privately, more of our pro-family forces assembled to protest and to end the program.

Arthur Schaper, our Organization Director, took up the challenge. He had spoken for MassResistance on other programs, including InfoWars as well as writing for Barbwire, Townhall.com, and other publications.

Arthur relates the rest of the experience below. 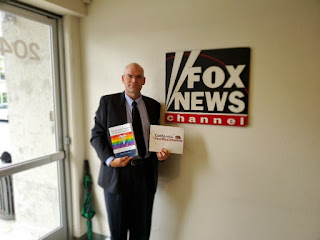 I had never participated in a debate or discussion on national television before, including the Fox News Channel. Even though the new channel touts its reputation as “Fair and Balanced”, our main office had concerns about Arthur’s appearance on the Ingraham Angle with Laura Ingraham.
Ingraham’s brother is openly gay, for example, and there is a growing recognition that the Fox News Network by and large is either pro-gay (one of their news anchors Shep Smith is gay) or simply refuses to discuss and confront the LGBT Agenda on its network programming.

I arrived at the LA-area news studio about an hour early, which gave him a chance to tour the facilities and take a few photos: 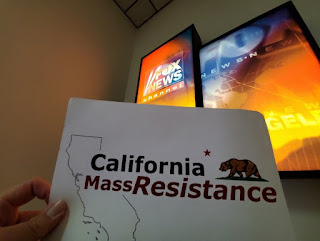 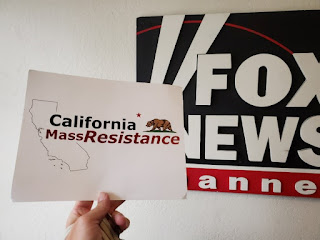 I received few instructions, aside from being told that I needed to focus on Drag Queen Story Hour.

INGRAHAM: When Leander, Texas, a city of 56,000, decided to put an end to this, citing upset citizens, a leftwing church known as Open Cathedral stepped in to hosted the event this weekend. So what happens there? Joining me now to debate is Arthur Schaper, director of Mass Resistance, and Jonathan Merritt, a progressive Christian writer and author of the book "Learning to Speak to God from Scratch." All right, Arthur, what is your group's main objection to these drag queen story hours that are popping up all across the country?

Arthur candidly admitted afterwards that he did not watch the Ingraham Angle regularly. Therefore, he had no real idea how the debate format works on her program. He was combative from the outset:

ARTHUR SCHAPER, DIRECTOR, MASSRESISTANCE: Thank you again, Laura, for having me on the show. My name is Arthur Schaper. I'm the organization director for Mass Resistance. We are the international pro-family group that makes the difference. We have had parents contacting us all over the country about these perverse programs. The bottom line is this. You have adult homosexual men, adult entertainers going into a public library reading to children. That alone should not only be setting off alarms, but people should be demanding this to be canceled even before it starts. We're not talking about diversity. We are talking about deviance. We're talking about perverse and destructive lifestyles being animated or advertised to children as if it's normal. You can just look at the website itself.

I was clear about the problem with drag queens reading to children—adult entertainment is not acceptable around young people. Period. I was not content with focusing exclusively on that issue, but wanted to bring out the fact that this was a subversive means of normalizing LGBT behaviors and ideas.

INGRAHAM: Wait, wait, hold on, Arthur, are you saying that gay people can't read to kids ever? We're talking about a very specific issue with drag queens. That's what we're talking about here, so try to keep it focused on that issue.

With all due respect to Ingraham, I had done exactly that, and so I continued:

In the next brief segment, Ingraham asked the progressive Christian author to justify allowing drag queens to read the children. I admit that I intermittently criticized his remarks, and Laura had to ask me to wait my turn. Looking back on this part of the “debate”, I recognized that there really was no need for me to interject remarks. Mr. Meritt’s attempts to justify Drag Queen Story Hour lacked “merit”, to say the least. His defenses of the program were weak and laughable.

Then Laura allowed me to wrap up this very brief segment:

INGRAHAM: Arthur, close it out quickly.

SCHAPER: There are normal ways to do this. We are not talking about knitting. We're not talking about a Bible class. We're talking about degenerate, perverse entertainment. And not only that, not one but two sex offenders were exposed at one drag queen story hour in Houston, Texas. That is what our organization revealed. Mass Resistance, I'm with the California chapter. If you want real reading – 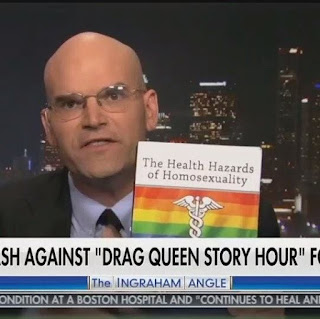 At that point, I brought up a copy of MassResistance’s famous, controversial tell-all book exposing the full extent of the health and societal problems with LGBT behaviors. I had intended to segue from the book to stating that this is the kind of reading that needed to take place in libraries. But Laura cut me off and refused to let me continue.

INGRAHAM: Don't hold up props. Here's one thing I don't like on this show, when people bring props. OK?

This criticism was unexpected for me. No one in the Los Angeles office had told Arthur that he could not have an item to bring up and show the audience. Also, it seemed strange that Laura took exception to my bringing up MassResistance’s key book exposing the LGBT Agenda and the dangers associated with those behaviors, but earlier in the segment she had promoted her other guest’s book. Why the double standard?

SCHAPER: This is what people should be reading to understand at length what's going on with this whole agenda.

In this last segment, the public got a better glimpse as to what was Laura Ingraham’s thought process about the segment:

INGRAHAM: OK, I got it, I got it. This is not a segment or promote one particular a group. We are trying to figure out what is really going on here. People have legitimate concerns on both sides of this issue. What is the point of doing this with kids? Is there a point? That's what we are trying to find out tonight. We wanted to have a really good conversation. We appreciate it.

For me, the statement that really troubled me from Laura Ingraham was ‘People have legitimate concerns on both sides of this issue.’ What?! There is no legitimate defense to allow drag queens, adult entertainers, in a public library to indoctrinate children to embrace destructive behaviors, lifestyles, and ideas!

Frankly, can there be any legitimate defense to allow illicit, sexually explicit adult entertainers into a library to read to children?

After the recording, the MassResistance main office shared concerns with Arthur about his performance on the program. Arthur conceded that he didn’t get to share many of the crucial points which the public needed to hear about the underlying agenda connected with Drag Queen Story Hour. He also recognized the fact that he interrupted the other guest. However, many people across the country watching the interview (and who followed Arthur’s YouTube Live feed afterwards) appreciated what Arthur did.

A number of viewers were grateful that Arthur spoke out against the LGBT Agenda forcefully and without reserve. They actually liked that he was not afraid to make the case with the title of the book “The Health Hazards of Homosexuality.”

Many supporters were quite critical of Laura Ingraham, in fact, instead of Arthur. Reviewing the interview, it seemed that Ingraham was only committed to giving that part of the program five minutes tops, hardly enough time for a robust discussion on a contentious issue. Viewers were also very critical that she cut Arthur off just as he was talking about the two sex offenders who were participating in the Houston, Texas Drag Queen Story Hour earlier this year. Many others also said that Ingraham has a long-standing habit of interrupting her guests, not allowing them to finish their comments.

One MassResistance activist in San Diego, California even suggested that Laura was caught off guard. She realized in the midst of the broadcast that she was ill-prepared to discuss the whole drag queen story hour phenomenon, and her lack of preparation frustrated her.

The positive comments have been coming in every since. Of course, having Arthur mention and speak up for MassResistance on national television is a big victory for our pro-family fight!

As expected, the backlash from the left-wing, pro-LGBT press was immediate. But their vehemence about Arthur stating the obvious—that homosexuality is hazard to one’s health—brought out even more vitriol from the left-wing media “watchdogs”!

Even more conservative leaning reports on Arthur’s appearance were not exactly charitable:
Washington Examiner: Ingraham cuts off anti-gay guest after he promotes The Health Hazards of Homosexuality

One part of the report suggested that the writer was more sympathetic to Arthur:

"All right, I got it," Ingraham said, rolling her eyes and cutting off both guests as it became apparent Schaper was not going to put down his book [italics added].
Ingraham brought on the guests to discuss whether or not "Drag Queen Story Hour" which was being held in various libraries and bookshops in Texas was a good thing.

More people have been requesting copies of “The Health Hazards of Homosexuality” since that show, as well.
Twitter had some interesting comments, too, the usual left-wing LGBT pablum:


So about last night.... Here is me on @IngrahamAngle with a man who is living, breathing evidence that time travel is real - https://t.co/d523kQS3My
— Jonathan Merritt (@JonathanMerritt) June 14, 2019

Arthur Schaper went on TV tonight to spread FEAR. He may well know people have no choice over being queer, but he wants them to be AFRAID to acknowledge it. He wants to encourage rejection and encourage discrimination. He does not value the lives of queer kids.
— Zack Ford (@ZackFord) June 14, 2019

Arthur’s appearance on the Laura Ingraham was a huge victory for MassResistance. Our efforts are expanding all over the country—and the world—and the press, both conservative as well as liberal—is starting to notice.


Two weeks ago, Arthur had published an article faulting the more conservative media for not taking a firm stance to report accurately and criticize the LGBT Agenda. His appearance on the Ingraham Angle gave him the opportunity he and the rest of the MassResistance team had long hoped for to get this debate about limiting and delegitimizing the LGBT Agenda in the larger culture and society as a whole.

MassResistance is not only making the difference, but is forcing the larger mainstream media culture to pay attention. The regressive left—the media, the institutions, and the activist groups—are getting worried as they realize that our direct, confrontational approach against the LGBT is working, changing minds and saving lives.