The Vegas Take Gets Taken to the Cleaners, Uses Strippers to Defend Homosexuality

Thursday on The Vegas Take: the group protesting Drag Queens in local libraries @MassResistance joins us for a live debate with a supporter from @EqualNV ... plus Mr. X and @mikejbabcock from @TMZ_Sports All starts at 9 a.m. PST on @KDWNLasVegas
— The Vegas Take (@TheVegasTake) September 12, 2019 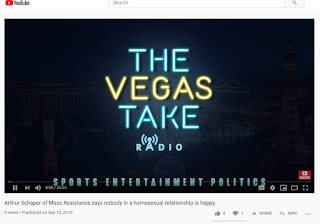 The Vegas Take on a Thursday we discuss "Drag Queen Story Time" and Arthur Schaper from Mass Resistance will debate Shapiro on why he is so against homosexuality and story time. @mikejbabcock from @TMZ_Sports for the latest on #AntonioBrown allegations. Tune in 9am @KDWNLasVegas
— The Vegas Take (@TheVegasTake) September 19, 2019


For some reason, The Vegas Take commentators couldn't handle the truth about homosexuality, transgenderism, and the like.

The second debate that I engaged in was really fun. I could not help laughing at their perverse, pathetic attempts to defend allowing sexually explicit, perverse entertainers around children.

They looked really bad, especially when Brian Shapiro acknowledged that he did not care about facts or data when it came to dealing with homosexuality, transgenderism, and the like.

They were so bent out of shape, that on their SoundCloud recording, they spelled my name wrong!