First, I will commend the Sheriff for maintaining the process of his predecessor, which is to pose the names and release times of count inmates. These essential practices protect domestic violence victims who fear their perpetrators. Regardless of the outrage from progressive organizations, this process allows for federal law enforcement to take into custody malefactors who need to be removed from this country. 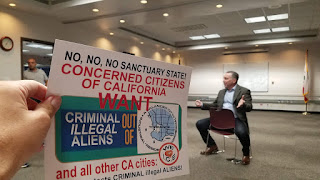 Those who oppose the removal of foreign national criminals from our country have expressed their larger agenda--the phasing out of the sovereignty of the United States and the imposition of Mexican rule or Aztlan rule or otherwise. This is a delusional farce which cannot be dismissed any longer.
I urge these proponents to review the Treaty of Guadalupe Hidalgo, the Mexican Cession of 1848. The Mexican nationals who resided in territories within the cession retained all property rights and received American citizenship. The President of the United States, James K. Polk, was prepared to respond to the larger interest of the Mexican population as a whole and annex the entire nation of Mexico. Those plans were thwarted when he lost control of Congress in 1846.

Now, regarding the federal statutes binding on the LA County Sheriff's department:

Our Constitution outlines our federal and by extension state and local governments’ commitment to the law of nations, as outlined in Article 1, Section 8 of our federal charter.

"To define and punish Piracies and Felonies committed on the high Seas, and Offenses against the Law of Nations;"

The law of nations requires a respect to borders, language and culture.

The Sheriff is defying the law of nations with his perverse insistence on undermining the rights and privileges of the citizens.

"It is quite legitimate for nations to treat their differences as a sacred inheritance and guard them at all costs."

The fact is, the critical functions of laws and regulations and monetary and fiscal stability, among other things, are provided by nations, not global institutions.
The nation, with all its flaws, is a concrete reality. The “global community” is little more than a concept.

The Sheriff's role is a concrete role. He is not supposed to interfere with federal law, federal laws. and the enforcement of those laws. Furthermore, his commitment to public safety should not hinge on halting or hindering cooperation with other law enforcement agencies. 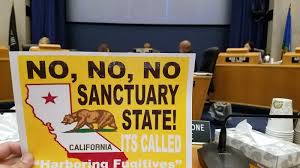 This agenda to undermine the distinctions among nations and to erase the United States with Mexico is insensate, racist, and non-sensical.

The role of the Sheriff is to respect the laws of our nation, not just the statutes passed by the state of California or the county of Los Angeles. When there is a conflict, the conflict must be resolved. Courts have so far determined that charter cities are exempt from enforcement of SB 54. I believe that counties should assert similar home rule as soon as possible.

Residents in the city of Cudahy have shared alarm about allowing foreign nationals, illegal alien criminals, to hide safely, free from deportation in this city or any other municipality in the County of Los Angeles.

Reminder: the California Sheriff's Association opposed and remains opposed to SB 54, the so-called Sanctuary State Law, which ironically provides sanctuary to no one, including the legal immigrant and illegal alien populations. The phasing out of these necessary distinctions will invite nothing more than bloodshed and ongoing chaos.

I resent the repeated fraud from the LA County Sheriff Civilian Oversight Commission members that immigrants in our communities fear reporting crimes to local law enforcement. It is simply not true. Individuals in this country legally, regardless of their background, have nothing to fear. Victims of crime can request a special VISA to ensure safety and stability.

Last of all, I commend the Sheriff and department for hosting these town halls. I urge his department to host meetings in Lennox, Lawndale, or the Wiseburn region in the El Segundo/Hawthorne Corridor. I sense that the South Bay, and the Southwestern region of LA County is not getting the proper attention needed and those stakeholders need to know that the Sheriff has begun heeding the concerns of all county residents.