It is essential for us to hold the local press as well as our local leaders accountable.

The fact is that the headline provides too much balance, and thus makes no effort to communicate the whole truth.

Check out the headline:

There was no clash. The people who were opposing Black Lives (Don't) Matter did not stand up and shout, nor did we interrupt or shout down other people who wanted to speak at the podium.

WRONG. Four people were arrested. One was cited out, three others went to jail and had to post bail. More info on that coming soon.

Three people were taken away in handcuffs and the Council Chambers were cleared after Black Lives Matters activists and counterprotesters clashed during the Torrance City Council meeting on Tuesday, May 14.

The room erupted into angry exchanges as one of the counterprotesters spoke at the podium during the public-comment period, sparring over how the city has handled the Dec. 9 police shooting of Christopher De’Andre Mitchell.

YES. That was me.

Here's a photo of my trying to speak to the Torrance City Councilmembers: 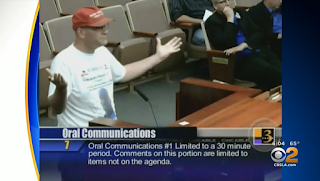 Mayor Patrick Furey called for a recess while the protesters shouted at one another and police officers swarmed in the front of the auditorium. Face to face with a line of police officers, activists chanted and shouted as city officials left the chambers.

As of 9:30 p.m., it was unclear if the meeting would be restarted. With protesters and other audience members waiting outside the chambers watching the proceedings on TV monitors, the council discussed whether they could begin again.

Ultimately, officials allowed members of the media back into the room, but proceeded without allowing the public to return.

It was the city’s first meeting since the City Council removed the topic  of Mitchell’s shooting from the weekly agenda.

This part just goes to show that giving in to bullies just eggs them on to continue shutting down the city council meeting and violate the rights of otehrs.

At every City Council meeting since January, family members and other protesters attended the meetings to demand that police release body-cam footage of the deadly confrontation between Torrance police officers and Mitchell in the parking lot of a Carson Street supermarket.

They have not just demanded, they have bullied and disrupted the meeting at length.

Last month, the video — both edited and unedited versions — were released to the public, showing how Mitchell died.

Mitchell died by suicide by cop. He chose not to follow the lawful orders of two police officers, both of whom had their guns pointed at the thug. He chose to disobey, and therefore he chose to die.

Previously, the agenda item had given the activists a place to speak during each meeting. Without it, they were forced to speak during the 30-minute public comment period in the beginning of the meeting.

The meeting went south when a counterprotester who identified himself as Arthur Schaper criticized the protesters’ efforts to disrupt the city’s meetings.

Yes, I did, and I am glad that I did so. Someone has to step up and start saying something.

“There’s a grieving mother here,” the activists yelled in response. As Schaper tried to continue, they shouted: “Say his name! Christopher De’Andre Mitchell.”

They did not yell in response. They yelled to silence any and all dissent. So much hate! When does it stop?

“I’m demanding that I receive the officers’ who murdered my son names,” Haynes said. Activists snapped in support as she called for the officers to be fired.

Honey, it ain't gonna happen. Your son was a ruthless, chop-shopping, car-thieving, gang-banging thug. He didn't want to obey the laws, he didn't want to respect the rights of others. He got the outcome that he deserved!

Haynes and others urged the council to create a police oversight commission to review officer-involved shootings.

We need to commit these self-righteous, hateful bigots into a prison or a mental institution. We cannot continue to allow those nonstop abuses of power and mob rule.