Crazy Christy Smith (D-Santa Clarita) Confuses Me for Constituent, I Live in Her Head Rent Free

Assemblywoman Christy Smith did not want to talk to one of her constituents.

Ever since she got elected in the 38th Assembly District (Simi Valley), she has been pushing a regressive, left-wing agenda, even though the district had been in Republican hands for a long time.

It's quite sad, really, to see how far the state of California has declined. Now we have active, unmitigated voter fraud, including ballot harvesting. That perverse practice is the only reason that Christy Smith and Katie Hill got elected in the Santa Clarita Valley region!

Now she's resorting to lying to the public about constituents in her district who are fed up with her corrupt, unsupportable votes.

Greg Aprahamian holds elected officials accountable all the time in the Santa Clarita Valley. He has no tolerance for politicians trying to take away charter schools from parents. He is extremely outraged about illegal immigration--and can anyone blame him?

Illegal immigration has ruined the state of California. Voter fraud, depleted public resources, and the declining quality of life, including the decrepit impact on the environment, are doing untold damage, and Greg is fed up with it.

When he confronted Assemblywoman Christy Smith over her votes against charter schools, she taunted him by calling him ... Arthur!

She thinks that I am the one who has been hounding her for her terrible votes! 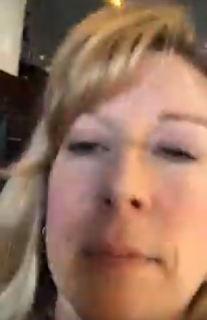 This is quite an honor. They are so desperate to discredit critics, men and women who have every right to petition their government for a redress of grievances, that they talk about me!

What are you afraid of, Christy? Can't handle citizen activists who expect you to serve them and not the special interests of Sacramento?

Check out the whole video which Greg recorded here.

Check out his full report below:


We Live In Their Heads
By Greg Aprahamian
We, meaning the activists connected  with We The People Rising. In their heads, meaning the minds of the newly elected leftist politicians of CA 25 namely  Rep. Katie Hill, Assemblywoman Christy Smith and David Barlavi.
I made the discovery that we live in their heads, on May 25, 2019, when I made a quick appearance at the “coffee”  with assemblywoman Christy Smith, with the goal of having Assemblywoman Christy Smith address AB1507, Legislation she has personally authored, and will in effect eliminate many charter schools in California.
Strangely, Christy Smith and her leftist colleagues enthusiastically support choice if a woman wants to abort her full term baby,  Christy Smith and her Democrat colleagues fully support choice, if non citizens (or millions of them) decide to waltz across our borders and choose to live and work in the United states, but allowing an American parent to have a charter school choice for their children, that crosses the line for Assemblywoman Christy Smith.
At the event, when I noticed Christy Smith walk by me I took the opportunity to ask her my unfiltered question.
www.youtube.com/watch?v=9PHtAtjWK8o
Notice the Assembly Woman's response:
She acts like she knows me, confidently addresses me by the name of Arthur, meaning Arthur Schaper, another prominent CA activist and insists I’m not from the district (false, but how would she know, and why would she keep confidently insisting that I was from out of the district?),  no doubt Christy Smith believed and accurately quoted from the shoddy reporting from local news reports and spin from Rep. Katie Hill regarding the Rep. Katie Hill town hall that occurred earlier this month (which blamed out of district people for Katie Hill’s loss of control).
santaclaritafree.com/gazette/opinion/katie-hill-blames-outsiders-for-town-hall-chaos-recognizes-need-for-border-enforcement-for-herself-yet-opposes-it-for-others
What this illustrates is that when the newly-elected leftists politicians from our district need to interact with the unfiltered public,   They are actively thinking about We The People Rising and it shows that we live in their heads. They know some of our faces and some of our names,  confuse different people and don’t know everything about us, but in public events we are what they worry about.
Newly elected Assemblywoman Christy Smith has never met Arthur Schaper, but she knows of him and he lives in her head,  Christy Smith doesn’t know my name but she knows my face and before a public appearance I live in her head.
Love us, like us or hate us, before and during a public appearance, we are what these leftist politicians are thinking about.  We are what they worry about and this is the position we hold.
They try and dodge our questions, when they see us, their taxpayer paid staff quickly surrounds them and tries to shield them,  and often they literally run away, they try and get the police to step in, but generally that doesn’t work because pointed questions and audience heckling isn’t against the law (yet), and it’s always a bit awkward for a politician to let the general public see that you’re trying to arrest the people you supposedly care about and serve.

Without us the veneer of control and respect generally remains intact, when we arrive it can become extremely hard for them to maintain the coveted appearance that they are respected and loved community leaders.

This is why we live in their heads and we hold the position that we do.
We have a purpose.  We oppose open borders, amnesty, illegal immigration, wage depressing expansion of foreign worker visas, politicians that are anti American, those that want to strip us of our rights and want to turn our country into a third world hell hole.
Love us, like us or hate us,  we serve an important role in California and there is a reason we hold the position in their heads that we do.
Posted by Arthur Christopher Schaper at 10:21 AM