Today is a sad day in Torrance.

Colonel, Pastor, and City Councilman Milton Herring has announced his resignation from the Torrance City Council, which will be effective June 30th, 2019. 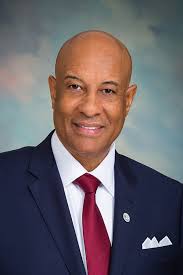 Here is the full press release issued by the Torrance City Website:

In his resignation letter, Herring writes, “Serving on the Torrance City Council has been an honor and privilege. Public service is an honorable calling, and I have been blessed to help lead the City during the past 3 years […] It is with a heavy heart that I, with the support of my wife, have made the difficult decision to step down from my position as Councilmember to dedicate more time to my family, and enjoy watching my grandchildren grow up.”

Herring serves as Chair of the Strategic Plan Committee, as well as the alternate Council liaison to the Torrance Sister City Association, as a member of the Finance and Governmental Operations and Transportation Committee, Armed Forces Day Committee, State Legislative Advocacy Committees, as well as the alternate for the South Bay Cities Council of Governments. Prior to his resignation he served as chairman of the Transportation Committee, as a member of the Citizen Development and Enrichment and the Strategic Plan Committee. He has been credited with advocating for our military and veterans and assisted in creating an Annual Veterans Appreciation Celebration and Social Services Commission. Earlier this year with concurrence from City Council, Councilman Herring participated in the creation of the City’s Torrance SERVES campaign, a month-long citywide celebration of service leaders. Aligned with Martin Luther King Jr. Day of Service, the celebration honored the service leaders of past and present with intentions of empowering the community to bring volunteers together for service projects that honor the spirit of giving, public service, and volunteerism.

Herring’s resignation immediately creates a vacancy on the Torrance City Council.  The six-member City Council may choose to have a special election or appoint a new councilmember to fill the vacancy. Councilman Herring was elected into office on June 7, 2016.

I imagine that more information will be forthcoming on this matter. A special election would cost a minimum of $100,000. It's expensive!

On the other hand, an appointment might awaken frustrations or a sense of insider power-politicking. If there is an appointment, let's hope that it won't awaken a sense of "starter advantage" for the upcoming city council elections, which will be held next March.