This was a great picture in the Daily Breeze: 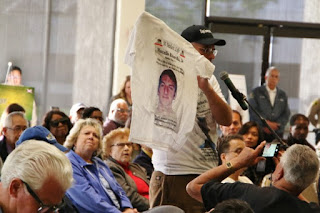 There are major edits needed in the report. I have provided them in [red brackets] within the original paragraphs: 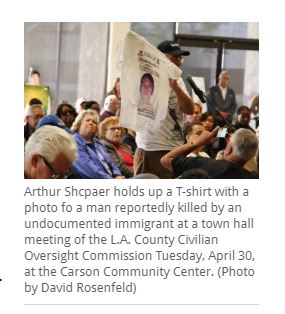 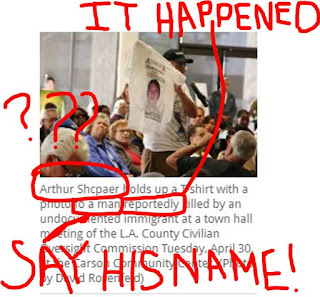 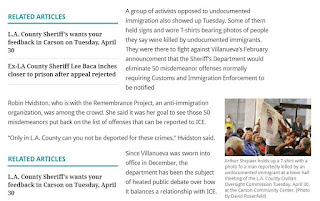 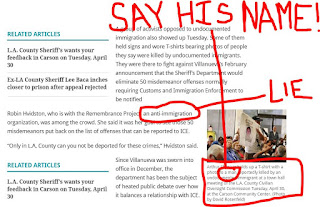 Arthur Shcpaer [My last name is "Schaper"] holds up a T-shirt with a photo fo [of] a man [Please write his name, Marcello Bisarello] reportedly killed by an undocumented immigrant [it's not "reportedly", since it is neither in doubt  nor in question. Marcello was killed by an illegal alien. The illegal aliens was convicted of this crime] at a town hall meeting of the L.A. County Civilian Oversight Commission Tuesday, April 30, at the Carson Community Center. (Photo by David Rosenfeld)

Robin Hvidston, who is with the Remembrance Project, an anti-immigration [This is offensive. No one in the Remembrance Project is "anti-immigrant" or "anti-immigration". We are anti-ILLEGAL IMMIGRATION. The hat I wore was made by an immigrant, and he supports secure borders, construction of the border wall, etc. This "anti-immigrant" label is too common a practice among SoCal News Group Reporters, and it needs to be corrected.] organization, was among the crowd. She said it was her goal to see those 50 misdemeanors put back on the list of offenses that can be reported to ICE.

David, I appreciate that you and more press agents are reporting on the victims of illegal alien crime. It is essential to report accurately. I cannot tell you how inaccurate and even libelous the phrase "Anti-immigrant" is. We have fellow pro-enforcement activists who ARE immigrants, in that they entered this country legally--and they voted for Donald Trump, too.

Please make the necessary corrections as soon as possible.


PS -- Please use my personal email for immigration matters in the future. -- arthurschaper@hotmail.com

I am delighted that you have my MassResistance email, but that account is for my pro-family activism. Thank you.

Posted by Arthur Christopher Schaper at 8:05 AM