The State of Jefferson, a Dream Inching Toward Reality

Hailey Branson of the LA Times has been repeatedly confronted about her connections with rabid anti-Semite Helen Thomas. To this day, she refuses to come clean or disavow her connections with the hateful muckraker, whose career went up in flames the moment that she declared "The Jews should get the hell out of Palestine." 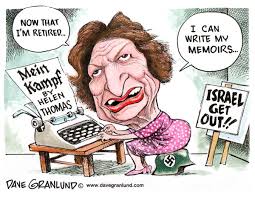 Yet to this day, Branson is still reporting for the LA Times, looking for every effort to smear freedom-loving conservatives.

Check out her latest story about the growing movement in Northern California, the state of Jefferson, and the natural inclination of American citizens who want to live their lives and be left alone:


In California's rural, conservative north, there are big dreams forcleaving the state

The two young, blond women in figure-flattering ball gowns hoisted whiskey and shotguns.
An auctioneer rattled off bids. Above the stage in the banquet hall hung a green flag for the 51st state of Jefferson, with its pair of Xs called a “double-cross” representing a sense of rural abandonment.

The two crosses represent the state of Jefferson, but of course Branson wants to smear conservatives of any background who simply want to live their lives free of the oppressive corruption of Sacramento.

Hundreds of people packed into the Veterans of Foreign Wars Post 9650 hall on this chilly Saturday night, ready to crack open wallets to help fund their dream of carving — out of California’s northernmost reaches — a brand new state.

I support the state of Jefferson! It's time for all enclaves to consider breaking away from the state of California, since the statewide officers refuse to uphold and defend their oaths of office. They are more interested in feathering their nests and disregarding the rule of law.

They care more about illegal aliens than American citizens!

The scene last month in this small Shasta County city seemed like a perfect we’re-not-in-California-anymore-moment. That is, if you only knew California as the diverse, liberal bastion whose elected officials have tried to stymie the Trump administration’s moves on immigration, legalized marijuana, climate change and so on.

There is nothing diverse about California, if one thinks that taking in one quarter of the entire population of Mexico counts as diversity. This is nonsensical. The truth is that powerbrokers in Sacramento want to turn California into a satellite of Mexico. That is not diversity. That is demographic tyranny. 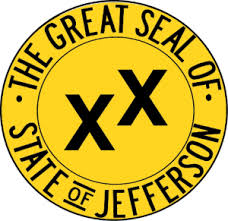 But the so-called Northstate is looking less and less like the rest of the Golden State. The vast, sparsely-populated region is whiter, more rural and poorer than the rest of the state — and residents are more conservative. While California has become the center of the resistance to Trump, a number of Northern Californians are waging a resistance of their own: against California itself.

Diversity is not a strength. In fact, is is turning into a fake buzzword to weaken individual liberty, limited government, and constitutional rule. Shame on all the racists who are pushing "diversity" as the first and final goal.

“You’re the ones being exterminated by a lack of liberty,” said Mark Baird, a Siskiyou County rancher.

The breakaway state of Jefferson is a decades-old idea, but it has been revived in earnest in recent years by residents who say they are fed up with their voices being drowned out in Sacramento, where outspoken urban Democrats hold a vise grip on the state Legislature.
Supporters say overregulation has hobbled rural industries such as timber, mining and fishing and that the state’s high taxes and cost of living are driving young people away, quickening the decline of small towns. They chafe under California’s strict gun-control policies and are infuriated by its liberal immigration laws.

"Vise grip" is quite accurate, as the Democrats in Sacramento, by way of the population boom of government leeches, welfare queens, and illegal aliens are taking over

They cite California’s new gas tax increase of 12 cents per gallon, saying it has an outsize impact on rural people who drive farther for work and basic needs such as hospitals, schools and grocery stores.


No kidding! These men and women work hard to feed not just their families, but all the families in California and around the world. Why do we continue to punish them and disregard their needs and concerns?

Supporters of a breakaway state say they are sorely underestimated and point to the number of passionate people who show up to their events. One man put it this way: “We’re not a bunch of dumb rednecks.”

Of course, narrow-minded bigots like the dwindling journalism staff of the Los Angeles Times look at all conservatives in that shameful, disparaging fashion. Men and women in the United States, no matter which state they hail from, have every right to be treated with respect and honor as individual citizens. There is no excuse for the corrupt, arrogant, out-of-touch political class to put the needs of illegal aliens and their third-house donors ahead of California's citizens.

Let's quote a passage from the Declaration of Independence to announce the rights of individuals under a loving Creator against tyrannical government:


That to secure these rights, Governments are instituted among Men, deriving their just powers from the consent of the governed, — That whenever any Form of Government becomes destructive of these ends, it is the Right of the People to alter or to abolish it, and to institute new Government, laying its foundation on such principles and organizing its powers in such form, as to them shall seem most likely to effect their Safety and Happiness.

The residents of North State have every right to pull up their borders and set new boundaries for themselves within a new state.

But some Northern Californians have had enough of talk of breaking away from California. After several county boards began considering Jefferson proposals, Kevin Hendrick, a retired municipal employee from Crescent City, in Del Norte County, formed a political action committee in 2015 called Keep It California to oppose the idea.

Hendrick said there are rural issues that need do more attention, such as access to affordable healthcare and the internet, but that separating from California would be financially devastating.

That's a load of crap, and even he knows it. The real devastation is the state legislature, which doesn't even honor the United States Constitution!

The state of Jefferson is a long-standing idea. It needs to become a reality, especially since working residents, farmers, contractors, and local officials are tired of paying bills to Sacramento, while getting nothing in return. The corruption is disgusting, and the incompetence of the California political class is unrivaled for its outrageous failures.

I wish all the best for North State. I never realized how bad it was until now. It is beyond shameful what is happening in California. If ever there was a time for breaking away from Sacramento, now is the time!